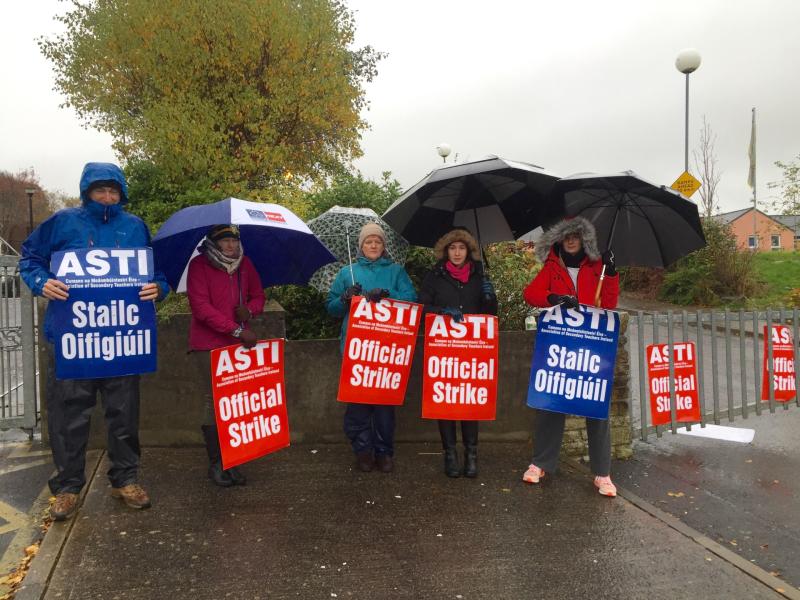 Eleven Donegal secondary schools were closed today, with the second of seven days of ASTI strike action under way.
The Association of Secondary Teachers Ireland (ASTI) approved seven days of strike action between now and December 7th.
Three Donegal schools were also closed on Monday, resulting from ASTI’s decision, in a separate action, to withdraw supervision and substitution duties from November 7th.
ASTI pickets were set up at 11 Donegal schools today. The strike action stems largely from demands for pay equality for newly qualified teachers.
“Today we’re on strike for equal pay for equal work,” Neil Gordon, geography teacher at St. Eunan’s College in Letterkenny, said today, Tuesday, standing in the rain with his colleagues at the college gates.
“It’s just equality we’re looking for,” Mr. Gordon said.
All seventeen of the ASTI members at Coláiste Cholmcille in Ballyshannon were out on the picket line on Tuesday.
Louise MacSharry, who teaches chemistry and maths at Coláiste Cholmcille, said, “There is a huge, huge pay gap, up to €9,000 per year, between teachers on the old scale and what’s being disparagingly called ‘new teachers’, those who have qualified since 2011.
“Every single one of the ASTI teachers at this school is on the higher rate but we feel so strongly that it’s unfair we are out here today,” she said.
Affected schools include schools represented by ASTI and dual-union schools, which include ASTI and Teachers Union of Ireland (TUI) members on staff.
The 15 secondary schools under the management of the Donegal Education and Training Board are not affected by the ASTI industrial action.