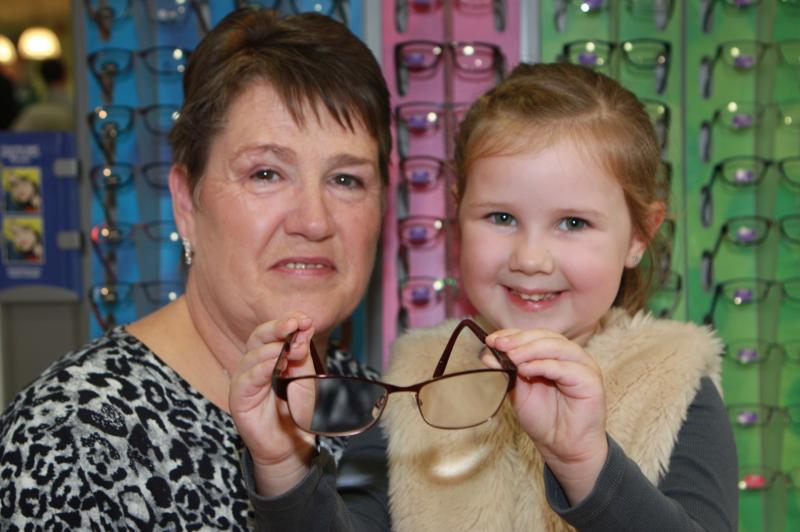 Margaret McConnell with her grandchild Chloe

A Letterkenny grandmother is one of four regional finalists who is in with a chance of winning the prestigious title of ‘Specsavers’ Ireland’s Grandmother of the year.

Margaret McConnell who has won Ulster grandmother of the year, was nominated by her grandchild Chloe Campbell, 7, and has beat off stiff competition from grandparents throughout the province to compete for the national title.

The team at Specsavers Letterkenny recently presented Margaret with her prize which comprised a framed certificate, bottle of champagne and a Specsavers voucher.

The Grandparent of the Year award was launched by Specsavers in association with Third Age to recognise the benefits of an ageing population and celebrate the special role that grandparents play in the lives of Irish families and the community.

Grandchildren of all ages were asked to nominate their grandparents with a written entry on why they deserved the title.

Margaret said: “I am absolutely delighted to be named Specsavers Ulster Grandparent of the Year and to be one step closer to winning the national title. It is a real honour and even more special because I was nominated by my granddaughter.”

Paul O’Donoghue, Specsavers Letterkenny store director said:  “Congratulations to Margaret on this much deserved achievement and her granddaughter Chloe for her fantastic entry which we were touched by. At Specsavers, we recognise that older people, and particularly those with hearing loss, are vulnerable to social isolation and these awards are an opportunity for younger generations to celebrate the many ways that grandparents and older people enrich our lives and communities. We wish Margaret the very best of luck in the final.”

Margaret has a very close relationship with Chloe who she sees almost every day.

In her winning entry Chloe says she always has fun when she is with her grandmother, knitting and baking together at Margaret’s house.

Chloe loves her granny’s sense of humour and says they often play jokes on her grandfather together.

Chloe described how special Margaret is to her, hoping to be just like her when she grows up.

The overall winner will be chosen by a panel of judges, including campaign ambassador Mícheál Ó Muircheartaigh, at the end of November and will win a weekend away in Ireland, a Specsavers voucher and the Grandparent of the Year trophy. The grandchild who nominated the winning grandparent will receive an iPad Air.

The other regional finalists are: Moya Connelly from Blanchardstown, Betty Crosbie from Killarney and Olivery Ryan from Galway.