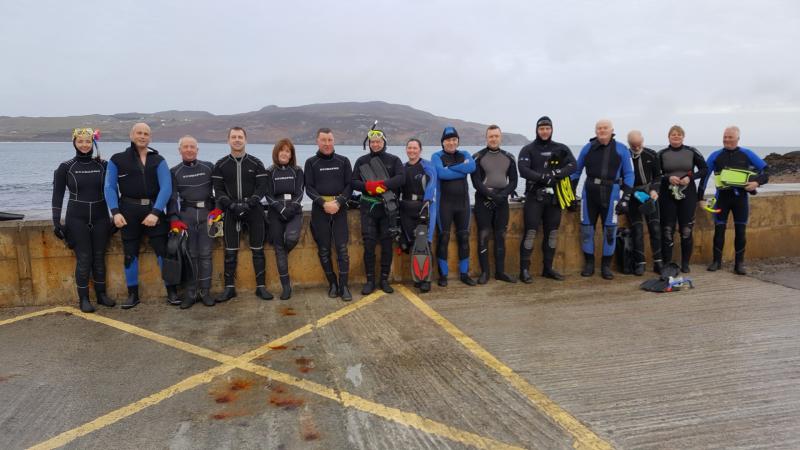 From the day of Sheephaven SAC's recent fitness test snorkel.

Our Sunday morning snorkel from PortnaBlagh harbour was led by Ryan Ward and once again very well attended. It was the first opportunity to conduct the water fitness test (WFT), which must be successfully completed for the upcoming 2017 dive season.
The water fitness test is required annually of all CFT divers. All diving members must demonstrate, without difficulty, the ability to complete three in-water exercises. Open Water Exercises: 1) Snorkel or swim 400m without stopping within a 10 minutes time frame (with fins); 2) Snorkel dive to 5m in sheltered open water; and 3) Tow a snorkel diver 50m.
For club members who have still to conduct their WFT, there will be plenty of opportunities over the coming weeks.
Afterwards, it was then back to Lizzie’s for a very well-deserved post-snorkel breakfast.
It is time to remind Sheephaven SAC club members that they can now pay their 2017 annual subscription directly to club account. Anyone who wants to be authorised to dive in January would need to ensure that they have paid their fees early enough to allow for the process to be completed in time, especially as only certified divers can be included in the Search and Recovery register.
Sheephaven’s AGM was also held this week for the outgoing committee.
After the various Club Officers delivered their reports, the club Chairman, John Joe Rowland, took the opportunity to thank all who helped make the year a resounding success. After a break, Willie Sheridan took the chair and called for nominations for club officer positions.
The following were elected for the 2017 Sheephaven SAC Committee:
Chairman - John Joe Rowland; secretary - Kevin Boylan; treasurer - Damien Kelly; dive officer – Ryan Ward; training officer - Anne Boyle; assistant training officer – Kieran Doherty; building officer - Willie Sheridan; boats officer - Timmy Boyle; compressor - Paul McCabe; PRO – Caroline McGee; medical officer – Maureen Gallagher; child liaison officer – Alison Burke; fundraiser – Eileen Coll; assistant fundraiser - Hugo McFadden; entertainment officers - Caroline McGee; oifig na Gaeilge - Michael P Bonner and vice chairman - Noel Brennan.
A special thanks to Hugo McFadden, who has stepped down as fundraising officer. Thank you for all the time and energy you gave the club over the years.
We welcome the new members to the committee: Ryan Ward, diving officer; Maureen Gallagher, medical officer; and Michael P Bonner, oifig na Gaeilge.
Ádh mór i do phoist nua.
We also thank the continuing members of the committee. We are very lucky to have such enthusiastic members who want to get involved, and we hope 2017 will be a great year for us all.
Finally, as newly elected PRO, I especially, want to acknowledge and thank Dearn McClintock for all his hard work and dedication to the club. He has stepped down from PRO, but without doubt he will still be devoted to helping and supporting the club.
Our Dearn! Dearn has been a diver with Sheephaven SAC since 2006 and the club PRO since 2008. He has publicised the clubs notes and achievements in the local papers and beyond. Everyone in the club agrees that he has been an outstanding PRO. He has now left behind some very big ‘fins’ for me to fill!!