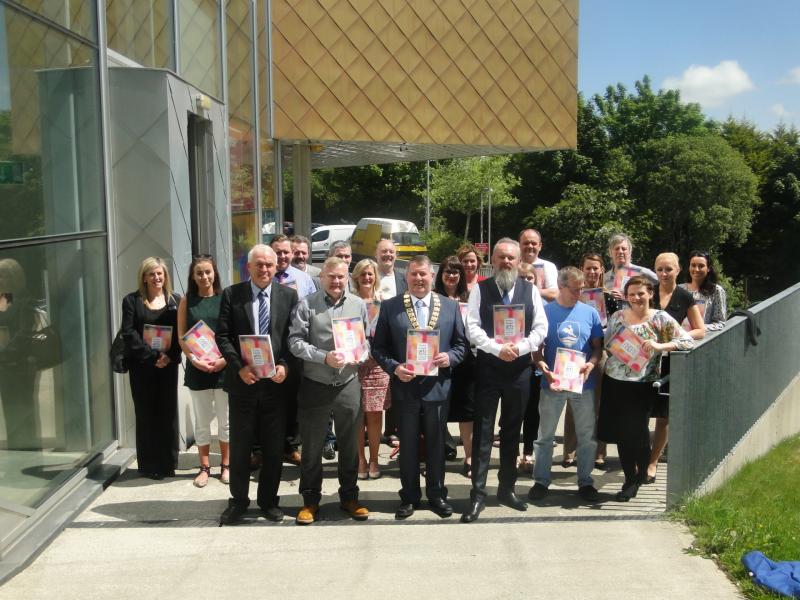 The Earagail Arts Festival is one of four Donegal events to receive Fáilte Ireland festival funding. Above, from last year's Earagail Arts launch.

Four Donegal festivals are among those sharing in €120,000 in allocations for 2017 announced by Fáilte Ireland.
Fáilte Ireland announced more than €1.6 million in funding for 16 national festivals and events as part of the first phase of its 2017 National Festivals and Events Programme.
The Donegal events on the list include the Earagail Arts Festival, which is to receive €45,000; the Rory Gallagher International Festival in Ballyshannon, €40,000; Sea Sessions in Bundoran, €20,000; and the Donegal International Rally, €15,000.
In addition to the 17-day Earagail Arts Festival in July, Earagail Arts’ vision for 2017 includes A Festival of Festivals, which will see Earagail Arts assist in the development of four additional festivals in off-peak seasons, including Letterkenny Trad Week in January, Distorted Perspectives in April, Donegal Bay and Bluestacks Festival in October and Creative Frontiers in December.
St. Patrick’s Festival in Dublin received the largest share of this phase of the national funding, with a €1 million allocation announced.
Fáilte Ireland said they will announce a further phase of national festivals funding in early 2017 that will deal largely with festivals taking place in the latter part of the year.
The national tourism development authority said each of the events funded in this first phase have demonstrated significant international appeal, describing them as 16 key national festivals and events.
“Large festivals drive tourism activity and are vital to sustaining tourism growth by providing enough compelling reasons for overseas visitors to choose Ireland,” Caeman Wall, head of research and evaluation with Fáilte Ireland, said in announcing the allocations.