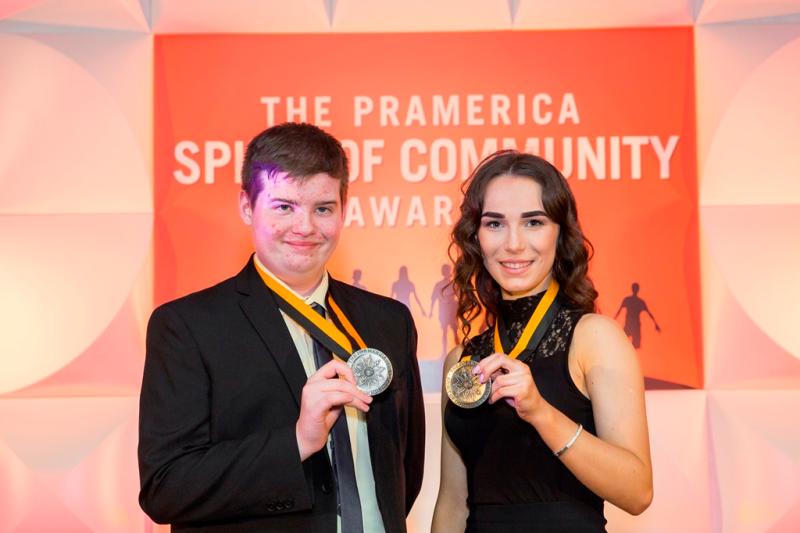 Aoife Gillespie and Dylan Nesbitt have been honoured at the 2017 Pramerica Spirit of Community Awards gala awards’ ceremony for the exemplary work they carry out in their local community.

The only all-Ireland youth initiative of its kind, the Pramerica Spirit of Community Awards programme recognises young people for their motivation, service and impact on their local community.

As 2017 finalists, Aoife and Dylan were selected for the honour from amongst hundreds of youth volunteers from across the island of Ireland and received €500 and a silver medallion, presented by Irish International rugby player Jordi Murphy.

Aoife is a sixth year student at St Columba’s College, She has been a volunteer for many years and is motivated when she sees the difference it can bring to the lives of others. The deputy mayor of the Donegal Youth Council (DYC), Aoife has worked with numerous organisations including the Health Service Executive (HSE) and the Road Safety Authority (RSA) to highlight mental health issues, internet safety and road safety. Having personally witnessed the tragic impact of cyber bullying and road traffic accidents in her local area, Aoife used the impact that these events had on her to raise awareness of these issues among students, politicians and other organisations nationally. Through her work with DYC, Aoife also worked with their Shake Up Sports initiative to encourage young people who have dropped out of sports to try new sporting activities. She has also been involved with Cycle Against Suicide and Donegal Road Safety.

Dylan, a fourth year student at Deele College, Raphoe, is a dedicated member of his local GAA club and began showing up at the junior teams’ training to help out as he knew the club was under resourced from a coaching perspective. Seeing the impact of his volunteering on both the club and the junior members, Dylan was inspired to commit to the club the best way he could on a long term basis. To do so, he undertook hours of official training, from coaching to child safety, in his own time to ensure that his work would have the most positive affect possible. Dylan spends a lot of his personal time outside of school at the club helping out and foregoes socialising and spending time with his friends to do so.

Speaking at the awards ceremony, Jordi said: “I feel honoured to have met such dedicated and committed young people who give their free time to helping others in their communities. It is testament to all of the finalist’s characters to be shortlisted for these awards, and I hope these young people continue to inspire others like them to give back to their local community and further afield.”

“These awards are designed to showcase young people’s commitment to volunteerism and tonight’s twenty finalists are no exception,” said Andrea McBride, vice president, Pramerica Systems Ireland. “It’s humbling to see the commitment and dedication from these young people, and we are honoured to recognise the volunteering they are doing in their local schools, communities and abroad to make the lives better of those less fortunate than themselves.”