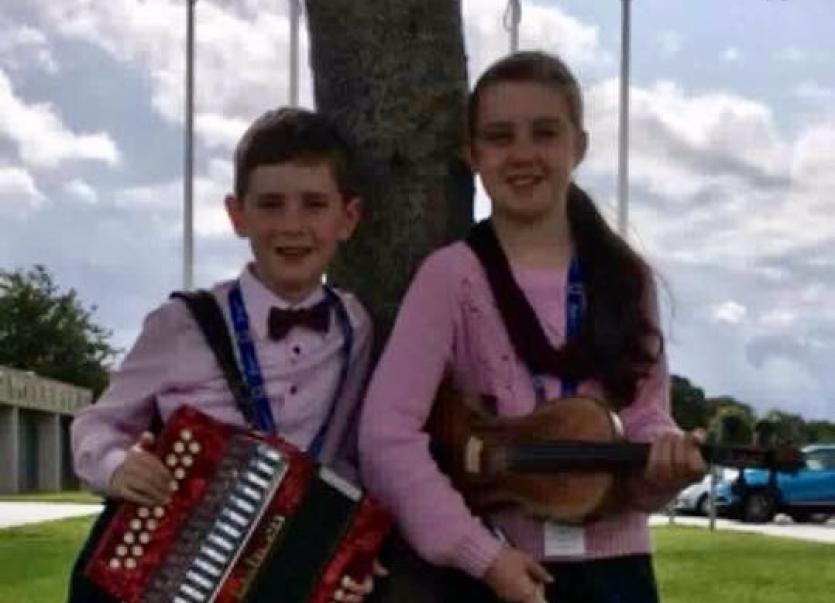 Dáithí (9) and Fódhla (11) pictured in Dublin on Saturday

A Ballyshannon duo are believed to have made history at the weekend becoming the first ever All-Ireland Community Games gold medal winners in the traditional music category from Donegal.

Nine-year-old Dáithí Sheerin and his eleven-year-old sister Fódhla blew the judges away with their playing at the finals in the National Sports Campus in Dublin.

Dáithí on the button accordion and banjo and Fódhla on the fiddle, stunned a huge crowd and impressed the judges with their renditions of a well known slide, ‘Biddy’s a Darlin'’ and ‘Tobin’s Favourite’ - a jig.

The Sheerins, from the Knather in Ballyshannon, just love their music and proud parents Sandra and Mark and their big sisters Ríonach (17) and Cíarde (19) were with them every note of the way.

Sandra, a talented gaelic footballer in her day and Mark, a handy hurler in the Aodh Ruadh colours, don’t play any instruments themselves, but they have done everything they can to foster a love of music and playing in all four of their children.

Sandra, originally from Ballybofey, told the Democrat: “Dáithí and Fódhla have been going to the Seamus Sweeney School of Music and that has been tremendous. I think it’s fair to say too that their older sisters have also been a huge influence and encouragement to them and they have picked up so much from playing with Cíarde and Ríonach.

“I was speaking to Michael Crossan who heads the Donegal Community Games and as far as we can be sure, this appears to be the first ever gold in traditional music, so that’s an added bonus for them.

“They played really well, Tipperary took silver and Meath and Kerry players followed in the other placings.”