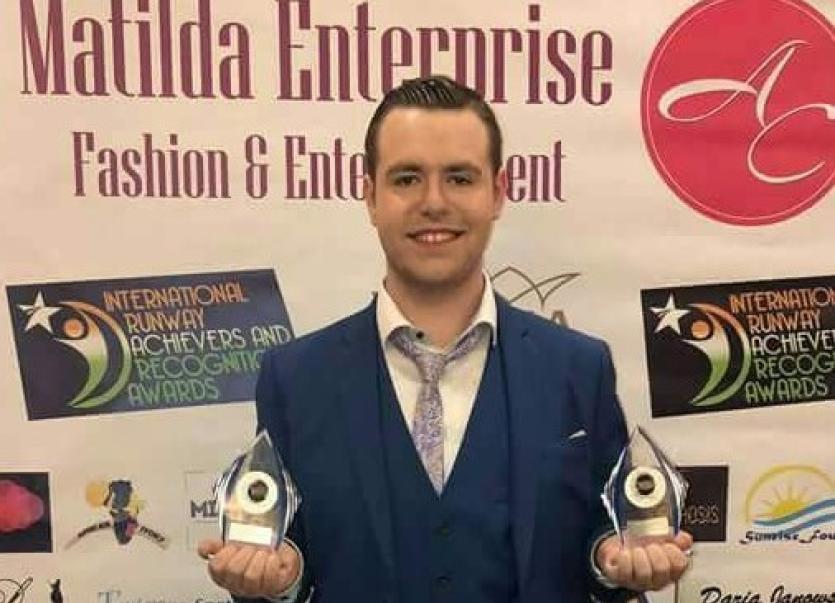 A young Donegal man is celebrating double success after picking up two awards at the International Runaway Achievement Awards in Dublin at the weekend.
Dylan Murray from Burtonport picked up the magician of the year award and the viral video of the year award at the International Runaway Achievement annual awards in the Hilton Hotel in Dublin last Saturday night.
It was a second year in a row that the 20 year-old captured the magician of the year award. He won it for the first time last year.
The viral video award was for a dvd produced in collaboration with World snooker champion Ronnie O’Sullivan which was filmed in the Clanree Hotel, in Letterkenny. The dvd was among Dylan’s body of work which caught the eye of the judges.
“It was a great night and it was a great honour for me to pick up the awards again,” said Dylan who was accompanied to the black tie event by his mother Pauline and uncle Josie.
“To win the magician award once again was brilliant but to win it two years in a row is special and hard to believe and hopefully now it will help me progress as a magician.”
“The dvd with Ronnie O’Sullivan was a huge success. It had over 25,000 hits on Facebook. It was just me and Ronnie having a chat and playing about and doing some magic. It really went down very well and was a huge success.
“It was a very enjoyable night and it was great to meet all the other award winners. ”
Dylan is a full time magician with most of his work on the corporate circuit and at private functions. He also does quite a lot of work with Belfast based magician Dynemo and he is hoping to put on live shows in Letterkenny this summer.
The International Runway Achievers and Recognition Awards (I.R.A.R.A) are a set of carefully selected awards given annually to recognise excellent work in a wide range of activities including pageantry, entertainment, fashion, community and business.
It was a case of double success too for the Murray family at the awards.
Dylan’s uncle, Josie Murray, was also among the award winners. The well known Jiu Jitsu champion and coach picked up the dancer of the year award at the ceremony.
This is the fourth year of the awards.