Hadfield touches down in Donegal 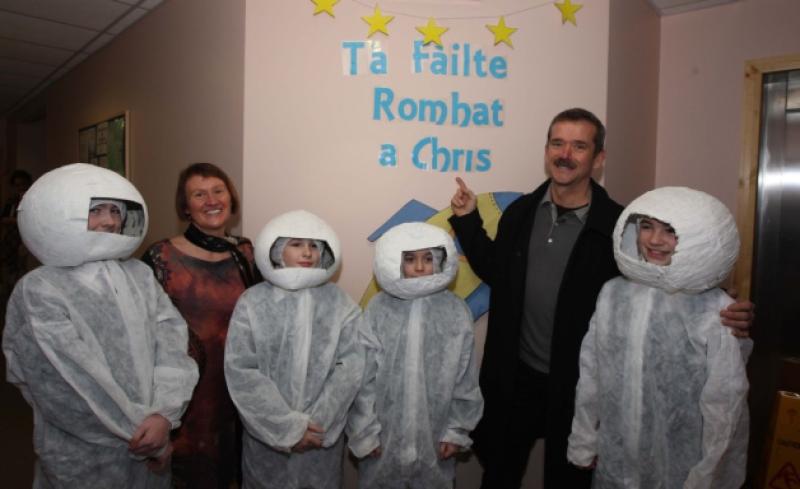 The famous Canadian astronaut who put Ireland on the map with the first-ever tweet from space ‘as Gaeilge’ last year, landed in Donegal today.

The famous Canadian astronaut who put Ireland on the map with the first-ever tweet from space ‘as Gaeilge’ last year, landed in Donegal today.

Former International Space Station commander Colonel Chris Hadfield visited Gaelscoil Bhun Cranncha this morning to learn some Irish from the children. Principal Úna Ní Mhaoilderig Uí Cheallaigh said everyone at the school couldn’t be more delighted. “He gave of his time so generously. He really respected the children and the language. It was one of those remarkable, magical days that you know will never be repeated.”

Donal Doherty of Harry’s Restaurant and Pub in Bridgend was equally chuffed. “It was our pleasure to welcome Chris Hadfield. He loved the Greencastle gurnard which was off the boat just three hours! He is a great gentleman who is being very generous with his time in promoting the Wild Atlantic Way and meeting and greeting everyone.”

Hadfield has agreed to act as a tourism ambassador for the island of Ireland and his visit to Donegal is part of this initiative. From Bridgend, he was heading into Eason’s in Derry to sign copies of his new book. He’s set to spend more time in Donegal sightseeing along the Wild Atlantic Way route in Inishowen and attending a traditional music session.

Tourism Ireland will create three short films of Hadfield’s five-day visit to Ireland – featuring different themes like Gaelic games, our spectacular scenery and major visitor attractions. These films will then be shared by Tourism Ireland with its Facebook fans (almost 2 million) and Twitter followers (109,000+) around the world, shining a spotlight on some of the many great things to see and do on a holiday in Ireland.

The films will also be shared with influential international travel and lifestyle media, through an extensive publicity and PR campaign.

Click here to watch Chris Hadfield singing Ride On at a session in the Ballyliffin Lodge & Spa. Hadfield at session