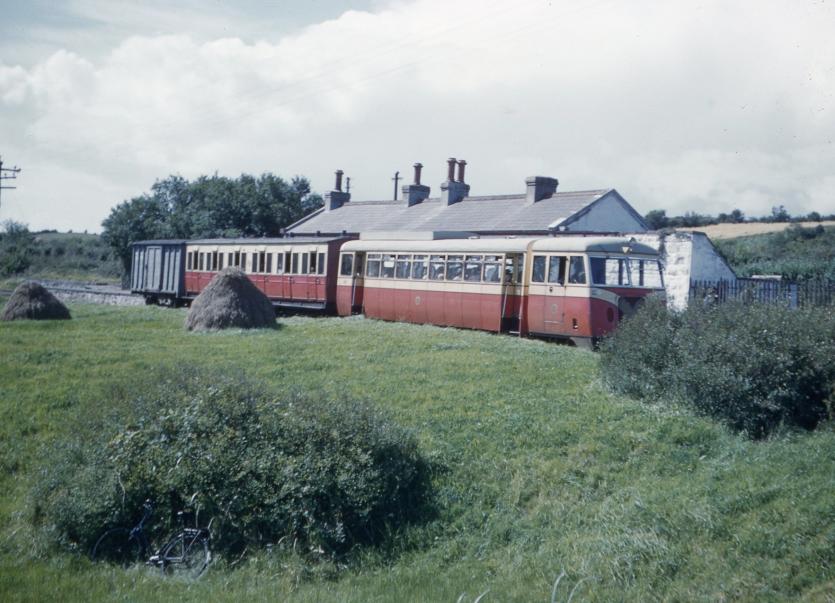 Mountcharles Station in August 1959 with a train from Killybegs for Strabane hauled by Railcar 20. The photograph faetures in the new book County Donegal Rail in Colour by John Langford

Donegal Railway Heritage Centre is launching a new book which records Donegal’s railway heritage.
County Donegal Rail in Colour by John Langford will be launched on Tuesday, December 10 at 7pm in the Railway Museum in Donegal town.
The book is the first full coloured hardcover book published by the museum in many years and has already created unprecedented interest across Ireland, the UK and further afield, Niall McCaughan, manager at the Museum said.
“Hot on the heels of our last publication early this year, Michael Bunch's Donegal Railway Diary, Part Two, we are delighted to be associated with another unique record of the Donegal railway. This latest publication is an album of the colour photos taken of the railway by John Langford, who visited the line during the summer of 1959, having heard it was to close and wishing to record its activities.
“A number of these pictures have been published before in various places, but this special collection has never before been published together. There are over 70 colour photos each of which has been carefully and informatively captioned using John’s notes taken at the time.
“This all-colour photographic collection gives a unique flavour of the line in its last year of operation showing both steam and diesel trains, passenger and goods, and stations and countryside.
“We are delighted as the key railway heritage organisation in County Donegal to have yet again another quality publication which records our remarkable railway heritage, particularly in this 60th Anniversary Year of the Station and railway lines closing. We are thankful to John for his work, Neil Tee for edited it, as well as to Donegal Local Development CLG for their funding towards this project.”
Frank Kelly, Donegal Local Development CLG stated: “Donegal Local Development CLG welcomes the project being delivered by the Donegal Railway Restoration Company CLG and which was funded under the Rural Tourism measure of LEADER.
The project can be of great benefit to the community of Donegal and tourists alike, helping to bring the Donegal Railway back to life through a series of unique pictures and accompanying stories.”
The hardback colour publication is available for €20 (10% discount for members), plus P&P. The book will be available through the museum directly, online, and through a variety of bookshops in across Donegal and Derry.
For more information or to purchase the book contact Tel: (074) 9722655 or check out:www.donegalrailway.com