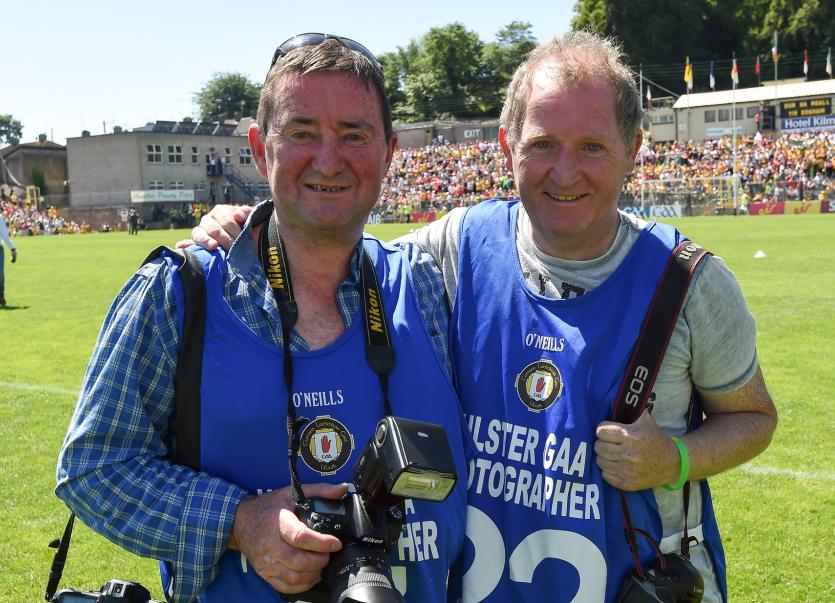 To paraphrase the words of Fr Gerard Cunningham at his funeral Mass on Tuesday, 'Life was richer for Michael O'Donnell's living'.
We knew over the last few weeks that the life of our friend Michael 'Jack' was coming to an end. We had watched him battle over the last four years, and in that short time alone he taught us much about life and how to live each day as it comes.
The popularity of the Glenties photographer was underlined by the huge outpouring of grief and messages of sympathy when news filtered through of his death on Saturday evening.
I got a call from Daniel McGeehin just before 5 pm to relay the sad news. He had visited Michael 'Jack' earlier in the day. The close-knit community of Glenties had lost one of their stalwarts.
The tribute programme on Owenea Radio on Sunday night presented by Brian Carr was local radio at its supreme best. In pre-Covid times there would have been a queue from The Rock back to the Main Street for 'Jack's' wake, but in these difficult times, the local radio station provided a great platform to celebrate the life of one of the town's greatest ever citizens.
Not that Michael 'Jack' would want to be portrayed as such. His greatest gift was that he was able to enjoy life and live in the moment. It was said that he was late for everything except a Gaelic football match. The match-day alarm was set for 9 am for a 3 pm throw-in. He was first to arrive at MacCumhaill Park or wherever the action was; a lunch or coffee in The Just Inn a pre-requisite.
His eye for a photograph was legendary and I'm sure there is a corner in the sports fields in Heaven just ready for his pull-along box and seat . . . and the long lens. That was his pride and joy, the first in the county to have a sports lens, that was not cheap when he purchased it in the 1980s.
It allowed him to capture anything within a range of 200m, be it action on the field or a face in the crowd. Hopefully, there will be some legal minds in that place in the sky to throw an eye over 'Jack's' captions to make sure they are politically correct!
The celebration of his life at his funeral Mass really did justice to the character of Michael 'Jack' and Fr Gerard Cunningham must take a bow for he captured the life in such great detail, and it always returned to his love of Bernie, his family and Gaelic football.
And lest it be forgotten, Michael 'Jack' was himself a very talented footballer, playing county minor and U-21 for Donegal. He was corner-back on the Donegal U-21 team of 1974, narrowly defeated by Derry in Claudy by 1-10 to 0-11. The report in the following week's Democrat said: "Martin Griffin had an outstanding game at full-back while Michael O'Donnell and Finian Ward also defended well."
Also on that Donegal U-21 team were the late Brendan Martin, Brendan Dunleavy and Michael Carr. Michael Lafferty cried off injured while Paul McGettigan was playing for Gormanston in an All-Ireland final (see team list on this page).
Michael 'Jack' was part of a Sligo/Leitrim P&T team which were narrowly defeated in an All-Ireland Inter-Firms final in Croke Park in 1975, losing 2-8 to 1-10 with Michael scoring a point.
Fr Gerard in his homily on Tuesday referred to their "being bumps in the road of life" for Michael. One of those bumps for Michael was suffering psoriasis. His had a very severe form of the skin disease while I had a few spots on elbows, back, etc. In the early 1990s he heard that there was a man with a cure in Rhode in Co Offaly. I said I would go with him and off we went one Monday at lunchtime. After stopping a few times for directions we finally found ourselves at the house with the man with the cure. It involved circling the body with a ring, for which we had to remove our shirts.
I was embarrassed to say that I had psoriasis when I saw Michael's torso; it was covered completely.
While we didn't make the required second and third trips, it didn't deter him and he sought further treatment a few years later and won that battle. 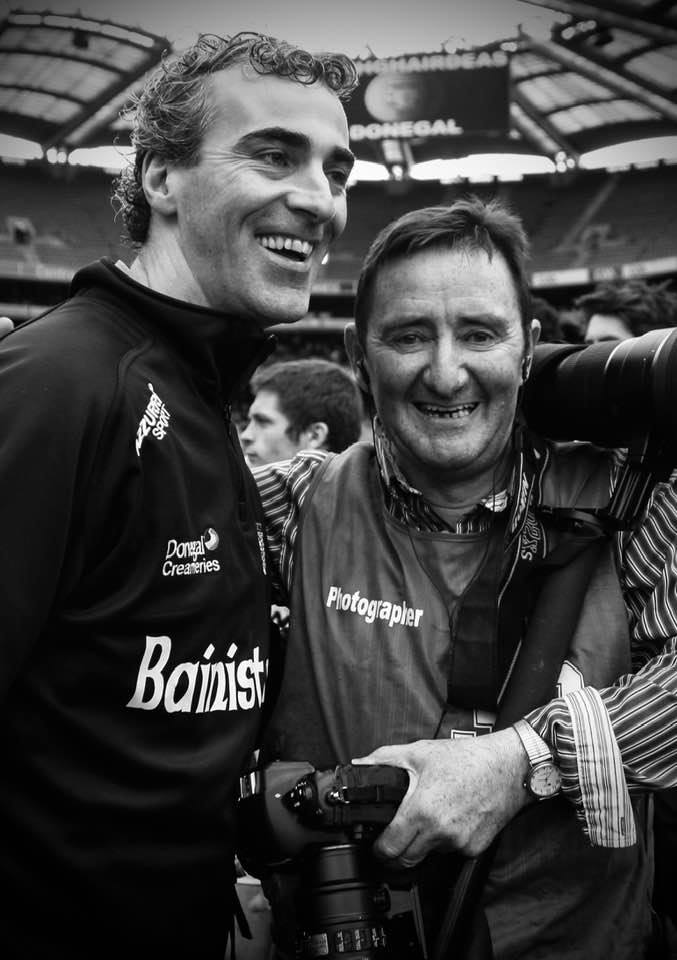 The late Michael O'Donnell with Jim McGuinness in Croke Park

TONY BOYLE TWEET
Another lovely story that unfolded over the weekend was a tweet from former Donegal GAA star, Tony Boyle, which went: 'You come home late and you come home early; sometimes you don't come home at all'. RIP Jack.
I contacted Tony on Tuesday evening to get the background. "My memory would be sketchy enough but I think it was sometime after the '92 All-Ireland and we ended up, myself, 'Jack', old John Connors snr, God rest him, would have been on the scene and Declan (Bonner). It might have been after a National League game and we ended up in Corr Point down in Packie's and we had a good night. That was one of Michael's go-to songs. I remember talking to him recently about it; it might have been five in the morning when we were leaving," said Tony.
"Then lo and behold, I hadn't seen him in a while then and I think it was the 1993 League final and here I was coming around in the parade before the match. And coming along the Canal End, you're trying to concentrate and the next thing I hear this 'You come home late and you come home early'. Jack on the sideline with the camera and the big smile. I broke out laughing and the boys didn't know what I was laughing about.
"We'd always greet each other like that afterwards whenever we would come across each other.
"He was a great character. A good skin, as they would say," said Tony, who said he would be missed greatly.

LOYAL
Above all Michael 'Jack' O'Donnell was loyal . . . to his family and friends and in the sporting world, to his beloved Naomh Conaill and Donegal. While his interest in photography was a joy rather than work, he was in heaven when sitting on the side of a field. He was prepared for all weather, ready to get that special shot.
The stories will continue to be told about Michael 'Jack' for a long time to come. I'm sure there will also be games to be covered where he is now.
May God have mercy on his soul.