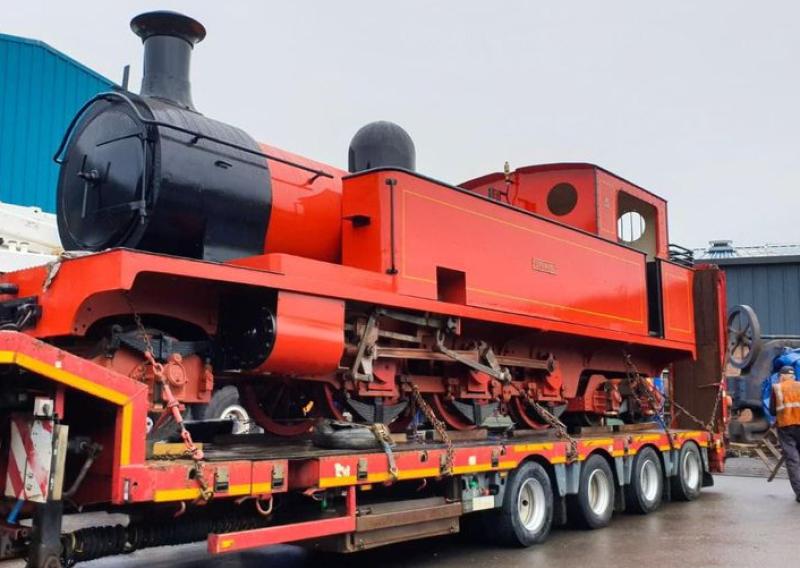 Drumboe about to leave Whitehead in Co Antrim where it has been restored PICTURE: Donegal Railway Heritage Museum

One of Donegal’s original steam engines has begun its journey back to the county more than 60 years after it went out of service.
Drumboe left Whitehead in Co Antrim, where it has been restored, after 11.30am on Saturday on its way to the Donegal Railway Heritage Museum in Donegal Town where it will go on display.
The 45-tonne engine, which is travelling on a low-loader, will be passing through Derry, Strabane, Stranorlar, Ballybofey and Barnesmore Gap. It is due to arrive in Donegal Town mid-afternoon.
It will stop at the Tinneys in Strabane, the former site of the railway station to which it made its last journey in December 1959. The engine will also stop on Barnesmore Gap, the scene of many iconic photographs of the engine in its heyday.
After arriving in Donegal Town, it will stop in the Diamond to allow members of the public to view it.
Drumboe will be lifted into position on a new presentation platform at the museum on Sunday morning.

The Drumboe engine was one of half a dozen built for the Donegal railways in 1906 and 1907.
It has become the iconic steam engine of the era of railways in Donegal.

Two years in the making

The project to return the engine into the county has cost €110,000 with funding from Leader on top of fundraising. The return of the engine has been more than two years in the making. As well as the restoration of the engine, the project has included the building of a new presentation platform and canopy at the museum.
The manager of the museum Nial McCaughan told Donegal Live there is a lot of excitement about the return of the engine.
“This is a big thing for the museum but also for the county,” he said.
“This is the first Donegal steam engine to be back in the county. It’s also the very engine that sadly left on the very last journey on December, 31 1959 - the very last passenger service that left Donegal Town for Strabane. So it has come full circle - it is coming back to Donegal Town and it is a great thing for us all.”
RTÉ is filming the return and has asked anyone who has stories about travelling on the railways in the county to come to Donegal Town on Saturday afternoon, Mr McCaughan said.
He said there are plans that the engine, which has been restored “from a rusting hulk,” will be run again on tracks in Donegal.
Most of the engine has been fully restored to an operational state so that when funding becomes available, it could go back into steam.
“We would love to put Drumboe back in operation - that is that plan,” he said.