‘Souvenir hunters’ may have removed body parts from stranded whales 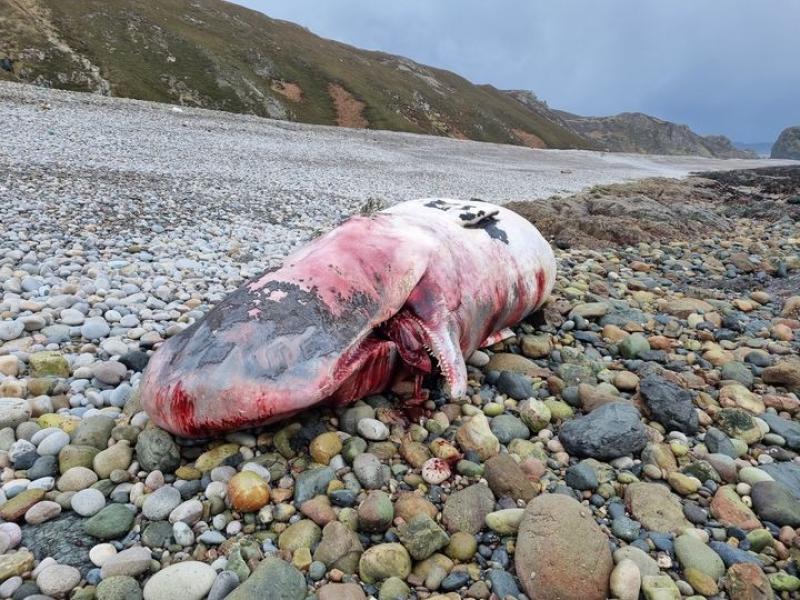 A female sperm whale washed up at Malin Head was one of two such strandings in Donegal last week PICTURE: Ali Farren

Souvenir hunters may have been responsible for the removal of parts of the jaws of two sperm whales washed up on the Donegal coast last week.

The female whales were washed up at Maghery in west Donegal and at Malin Head last Wednesday.

Photographs taken after the strandings show the lower jaw of both animals had been removed.

Marine biologist Seán O'Callaghan claimed in a tweet that the jaws had been taken by souvenir hunters or people hoping to sell the teeth “even though it's disrespectful and illegal”.

The Irish Whale and Dolphin Group (IWDG) said it has taken samples from both whales but had not removed the lower jaws.

IWDG strandings officer Stephanie Levesque said the removal of the lower jaw bone was common in sperm whale strandings.
“I don't know who does, but it is something that happens with sperm whales when they strand - the lower jaw is the first thing to go. I don't know if people think they are worth something. We don't know who did it. It might have been someone who did it for legitimate purposes but it was not us.”
The IWDG requires a licence to remove samples from the protected species. She said the group usually takes one or two teeth from the whales to help determine the age. She said the condition of the animals would not be enough to suggest that there was an unnatural cause of death.

“The majority of animals die at sea and after floating around for weeks and being attacked by scavengers they are washed up. The condition is not odd at all.”

Sadness as dead whale washes up on Rosses beach

It was not possible to say whether the deaths of the whales were linked to sonar testing, as has been suggested,  following Russian naval exercises which were held 200 miles off Ireland's south-west coast, she said.

“We do get about an average of three sperm whales  (washed up or stranded) a year so the numbers are not concerning at this time but it is something we are keeping an eye on.”

The IWDG clarified in a Facebook post on Wednesday that the recent stranding deaths of whales in Ireland cannot currently be described “as an unusual mortality event”.