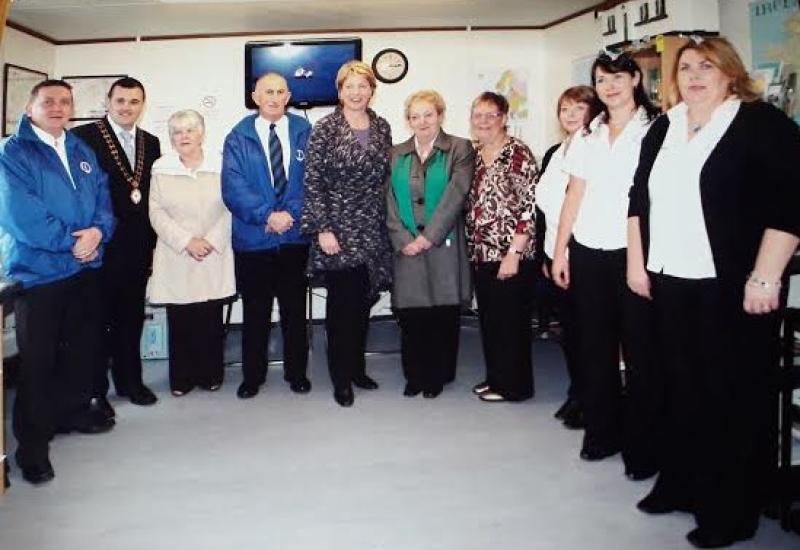 The pioneers of the now thriving tourism centre

The tourist office as it was known then was in temporary accommodation thanks to the generosity of the Killybegs Sea Angling Club. While it served a purpose at that time it was, however, temporary and unsuitable long term due to Health & Safety issues and had no facilities for workers.

In 2008 Kathleen McGuinness on her usual Sunday walk along the Shore Road collecting and disposing of rubbish noticed a small ship at the main pier and passengers walking around looking for places to go. Unfortunately at that time on a Sunday morning, there was very little open except the paper shop.

Kathleen discussed this at the Parish Council meeting where it was thought that something needed to be done about this. The Cruise Committee was formed with the late Anne Dorrian, Kathleen McGuinness and myself, Ann McHugh with help from other members Fiona O’Shea, Niamh McGilloway Kennedy and others who assisted when needed. The necessity for a tourist office was a priority.

Contacts were formed with the Harbour Centre and Sinbad Marine Services as agents for the cruise ships.

Within a short time, Ann McHugh received an email from Terry Toohey of Cruise Europe who was preparing to address the American Travel writers at the 52nd Convention in Manchester 2007. His remit was new ports and he had chosen Killybegs as one of eight ports to promote. The promotional literature was also being given to other delegates attending cruise conventions in Miami.

Julie Parkinson and I got working on this very and comprehensive promotional document. Julie provided the technical information regarding the Harbour Centre including the facilities available to ships from local engineering businesses etc. I worked on the tourism information not just for the local area but included information for possible coach tours from Cruise ships around the county and Sligo Tyrone & Fermanagh. Also included were the connections with American history.

We expect that this comprehensive document contributed to the development of the cruise business to Killybegs coupled with the excellent facilities of the new Harbour centre and the convenience and easy disembarking for passengers.

The provision of a new tourist office was the project taken on by the Cruise Committee. We contacted Barney McLaughlin Donegal Co. Council for advice and guidance on how to proceed with this project. Barney continued to guide and support us throughout the process.

The site was identified and the decision was taken to approach the Dept of Marine regarding the lease of the green area where the office is now. This involved a lot of negotiation and a final agreement was reached.  The lease was originally for 4 years however we eventually got a commitment that a further extension to the lease may be possible but not long term.

Applying for funding was always going to be an arduous job very much dependant on the good business plan and the help received from Margaret Doherty in the preparation of this comprehensive business plan was invaluable.

Prior to the Portakabin being placed on the site there was support from many people in the preparation of the site and the laying of the foundation and great thanks due to many who helped at this point too many to name as would not like to omit anyone.

The total project funding was €80,000. Like most good plans there was a cost overran of €2000 and we the Cruise Committee had to fund that shortfall to avoid delay. Our banking business was at the Ulster Bank who trusted us with this and the priority was to get this loan paid off quickly.  Kathleen McGuinness organised a trip on the Donegal Bay Waterbus. This was very well supported locally and the general area. The night was a great success and enough was raised to pay the loan.

The Killybegs Employment Project Ltd (KEPL) with Colin Mabon and Annemarie Burke were an enormous help to us staffing the office and allowing staff to assist at the Harbour Centre for the Meet & Greet when cruise ships arrived. This was great experience and was followed by arranging courses at the LYIT tourism college for the staff to gain extra qualifications and experience the satisfaction of graduation.

The three of us on the Cruise Committee each had our own niche interests.

Anne Dorrian started the “Think you are from Killybegs” project which was a great success and a wonderful interest for people all over the world. It placed the Information Office centre stage and brought much pleasure to many at home and abroad. Anne also was the person that worked on the accounts and stock.

Kathleen McGuinness developed the Craft Fairs on cruise days which became a great attraction to cruise visitors. Crafters travelled from all over Donegal and even Sligo to take part. The Bay View Hotel was very supportive of this and made the Function Room available free of charge and still do. Kathleen also got Irish dancers to perform which was thoroughly enjoyed by cruise visitors and others.

A follow on from the craft fairs was funding for the opportunity for the crafters to attend Dublin for the Christmas Fair at the RDS for two years. Quite a few of the people who are displaying their beautiful crafts in The Wild Atlantic Crafts shop started at the Craft Fairs.

Ann McHugh’s interest was based on the cruise business and working to attract more visits to the Killybegs Harbour working closely with Julie Parkinson to ensure that Killybegs as a cruise port was recognised worldwide.

Some cruise ships were very pleased to welcome visitors to the ships and tours were arranged for lecturers and students from LYIT Tourism College.

The first cruise ship to stay overnight was the MV Minerva in 2012 Local musicians and dancers were invited onboard for the after-dinner entertainment. Some passengers went out to Harvey’s Point, Castlemurray House and the Clock Tower for special dinner menus and entertainment. Many attended the Harbour Bar after dinner for traditional entertainment which was enjoyed by all.

In 2013 the MV Voyager spent 4 days in port due to a breakdown. Most of the passengers were very pleased as there was entertainment organised for them. Excursions Ireland worked with the Cruise committee to offer extra free excursions for the passengers.

There were trips to Derry two days and some passengers never thought they would experience walking the walls of Derry. They were all very impressed. Trips were arranged to all the iconic visitor attractions for the few days.

The cruise Committee also provided the shuttle bus which was a great asset to some passengers and increased visits to the Donegal Carpets factory in particular.

Hidden Gems on the Edge Tour was another successful project launched by the Cruise Committee.  The tour to Sliabh Liag was along the coast road via Mucross. Following some excellent reviews on Trip Adviser by visitors from the cruise ships the tour was being booked even 6 months in advance by cruise visitors.

Appreciation to Thomas Hegarty who was always out early making sure the Shore Road was cleaned and presentable.

Cllr. Niamh McGilloway Kennedy was a regular volunteer in the office and at the Harbour Centre and still is volunteering on Cruise Days.

Prior to the official opening day, there were many helpers on hand to get everything ready for the Official opening. It was a great day and the dream came to fruition.

In the 10 years of the Killybegs Information Centre and the year during the building preparation a total of 94,750 visitors approx. visited the Harbour Centre Killybegs on cruise ships.

This look back at 10 years of the Killybegs Information Centre has been tinged with some sadness.

Kathleen McGuinness will continue to organise the Craft Fairs on the Cruise Days.

We take this opportunity to wish the management and all involved in the Killybegs Information Centre continued success going forward.

We hope that it will remain part of the working and business community of Killybegs for a long time to come in the promotion of tourism in South West Donegal in particular.