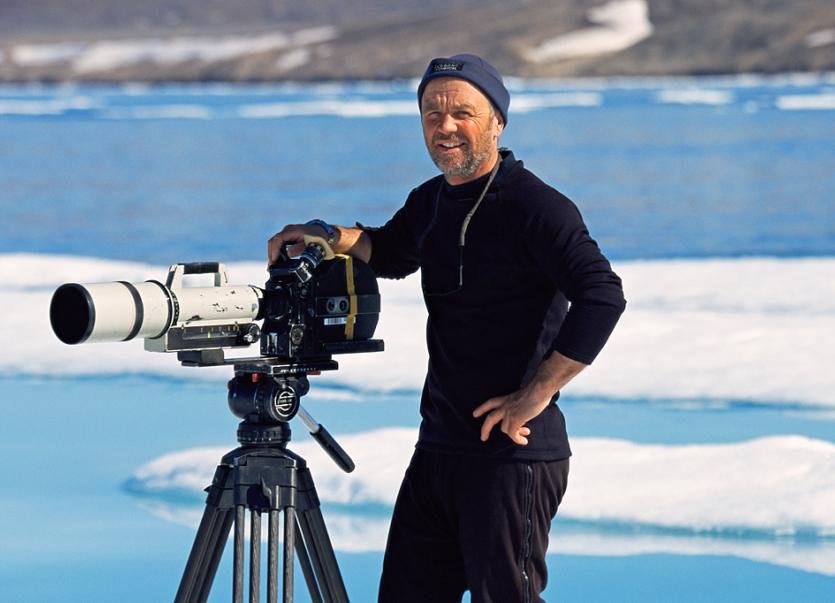 Wildlife photographer Doug Allan is coming to Letterkenny and Ballybofey

Aussie Bryson and Fergus Cleary among others perform at An Evening Of Song & Stories at The Playhouse in Derry tomorrow night (Friday 21st). Veteran showband The Indians play The Alley in Strabane and You’ve Got A Friend celebrates the music of James Taylor and Carole King at The Millennium Forum.

Also on Friday is the opening of Local Legends,  an art exhibition featuring images inspired by Irish Mythology burned onto wood by artists Nathan Keys and Jeni Kennedy. That’s at The Balor, Ballybofey at 7pm.

Also at The Balor, on Saturday afternoon at 3pm, is a free screening of seminal documentary The Battle Of The Somme in conjunction with the Donegal County Museum.

On Saturday evening singer Chris Kavanagh performs his Spirit Of Irish Folk show at The Alley in Strabane and Peter Corry’s Masters Of The Musicals is at The Millennium Forum in Derry.

Finally, The Butt Drama Circle begin a 3-night run (Tuesday 25th to Thursday 27th October) of the John B Keane classic Many Young Men Of Twenty at The Balor, Ballybofey.

Many Young Men Of Twenty

The Susan Doherty directed production of John B Keane’s Many Young Men Of Twenty opens at The Balor, Ballybofey next Tuesday.

The play, considered by many to be one of his finest, takes a look, at times hilarious, other times heart wrenching, at emigration in 1950’s rural Ireland. The late ‘50’s, of course, was an extremely  bleak time in rural Ireland. Lack of jobs and opportunity forced many young people to take the boat to England in search of work. The struggles, character and humour of this period is shown through the eyes of Danger Mullaly played by Seamus McCrudden.

It’s not all doom and gloom though. While thought provoking and poignant, the play is also steeped in classic John B Keane humour. It’s at times a raucously funny piece filled with great characters and comic moments. There’s also live traditional music featured which adds enormously to the recreation of the chaotic, irreverent atmosphere of your typical 50’s pub.

The play features a popular local cast including Dairine Laverty and Mickey McMahon – both most recently on The Balor stage in Oliver The Musical – as Peg Finnerty and Tom Hannigan respectively. There’s also a debut outing for Niall McGonagle (well known throughout the county for his work with the Finn Valley Athletic Centre) in the role of Kevin and, in a case of art imitating life, his on stage mother is played by his real life mother Rosaleen.

The Butt Drama Circle present John B Keane’s Many young Men Of Twenty from Tuesday October 25th to Thursday October 27th at The Balor Arts Centre, Ballybofey at 8pm nightly. Tickets are priced at €12 / €10, from 0749131840 or www.balorartscentre.com.

The Man Behind The Camera

David Attenborough has long made his name as the gold standard of the wildlife documentary. Life On Earth, Blue Planet, Frozen Planet, Planet Earth – the list of entertaining and amazing programmes he’s made goes on and on.

If you’re a fan of wildlife documentaries in general and Attenborough in particular, than you’ll be interested in a couple of upcoming Donegal appearances by his multi award winning cameraman Doug Allan.

Doug comes to Donegal with his show In The Company Of Giants,  an unforgettable evening of extraordinary animal adventures and unique wildlife film footage. “Big animals are my passion” says Doug, recounting what it’s like to face a hungry polar bear and its cubs as they emerge from their den or to swim eye to eye with an enormous Southern Right Whale.

The show is part talk, part screening followed by a Q&A session where you can ask Doug questions about his encounters and travels and find out what it’s like to be up close and personal with nature’s biggest creatures.

Doug was here before a number of years ago with his ‘Life Through A Lens’ show - an utterly fascinating insight into the extraordinary lengths wildlife documentary makers go to behind the scenes to get the jaw dropping footage that ends up in the final cut. It was one of the most interesting and memorable shows that we’ve hosted and I’m really looking forward to this one.

Doug Allan In The Company Of Giants is at An Grianan Theatre, Letterkenny on Thursday next October 27th at 8pm. If that doesn’t suit, he’s also at The Balor Arts Centre, Ballybofey on Tuesday November 8th. Tickets for either show are €18 (€16 concession) available from An Grianan  on 0749120777 or www.angrianan.com and The Balor  on 0749131840 or www.balorartscentre.com. respectively.

Mea Culpa. Damien Dempsey is not playing in Letterkenny next month, which I wrote last week.

I was working off an informal unconfirmed schedule which has since changed.