Column: Man’s questionable relationship with animals is in the spotlight 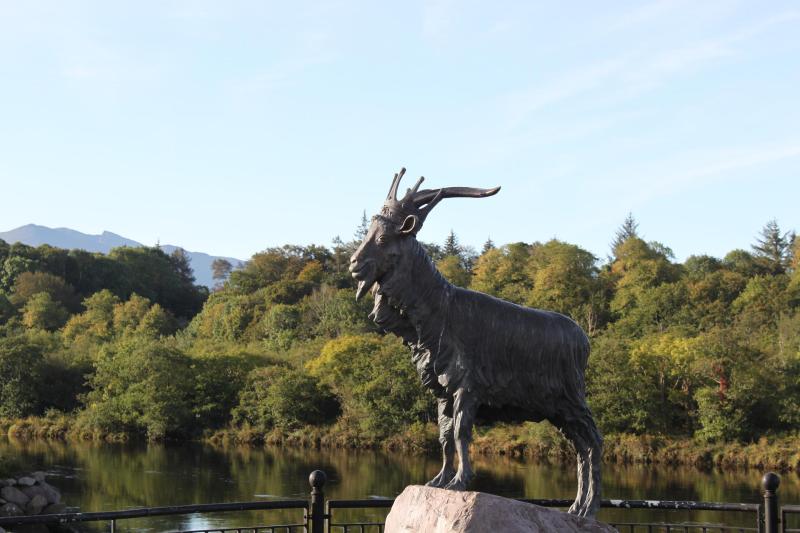 The recent controversies of the Puck Fair goat and the killing of Freya the walrus in Norway are stark and uncomfortable reminders of our questionable relationship with the animal kingdom.

It is easy to sit here in Donegal and condemn big game hunting, whale fishing, and all such horrific things that pop up in our social media news feeds. Anyone can be an armchair activist, taking a moral high ground stance and adding comments to social media posts.

But real change requires taking a long, hard look at ourselves and at our own society, and at our own behaviour, actions, and our ideas of what is acceptable.

I remember going to Puck Fair as a child. I’m not sure what age I was, but when I was told that the ‘Puck’ was the king of the goats, I was innocent enough to believe he was actually a king and that he was happy to be celebrated at the festival.

Years later as a young adult, I was watching a news report on Puck Fair and felt quite stupid at my earlier naivety, even allowing for the fact that I had been a child. By that stage of my life, the idea of people going out and capturing a wild animal and putting it in a tiny cage in a crowded town appalled me.

It is incredible to think that in this day and age, when we are so much more mindful of animal rights, that this practice continues.

How often do we hear the word ‘tradition’ as an excuse for behaviour that should be unacceptable?

What I found particularly worrying about the Puck Fair debacle was that despite the undeniable cruelty to the wild goat being held in a cage with temperatures in the high twenties, it was only after a directive was issued by the Department of Agriculture that the goat was taken down from the caged stand.

In other words, it was only when the festival organisers were forced by officialdom to act that they did so. And even after following the directive last Friday, they continued to defend their original actions.

The Department of Agriculture, Food and the Marine received 175 calls to its Animal Welfare Hotline in relation to the Puck Fair goat as of Friday evening. A number of animal welfare organisations, both national and local to Kerry, also reported receiving a high number of calls from people voicing concerns for the goat.

It now seems that the entire ‘King Puck’ concept is under review, and not just because of this year’s exceptionally hot weather. Let’s face it, if someone were to moot the idea today of going out and capturing a wild animal from the mountains, parading him through the streets and then suspending him in a tiny cage 50 feet above the crowds below for three days, it would seem archaic, barbaric even; a display of supremacy that has no place among right-thinking people.

While a number of public representatives have publicly condemned the practice, independent Kerry TD Danny Healy-Rae defended it, telling Kerry Radio: “I saw the goat and the goat is fine.”

He told listeners that the committee, and all committees for the last 400 years, had the goats’ welfare ‘always at the centre.’

Ironically, he went on to say: “I was glad to see that people were enjoying themselves in Kilorglin last night and not locked up like we have been for the past few years."

Though of course he didn’t mention, not locked up like the poor wild goat.

It is understood that a local sculptor has offered to create a ceremonial King Puck so that this traditional fair can continue without any discomfort to wild animals. Let’s hope that common sense and compassion will prevail and the veil of tradition will no longer be used to mask a cruel and unnecessary practice.

Elsewhere, the killing of a walrus in a Norwegian fjord has also led to questions about humankind’s relationship with animals.

Freya, called after the Norse goddess of beauty and love, has been basking in the waters of a fjord near the Norwegian capital Oslo since mid-July.

The decision to euthanise the animal drew global attention after members of the public ignored appeals to keep their distance - in the interests of their own safety - from the 600kg animal.

It’s easy - and certainly justifiable - to point the finger at Norwegian authorities for the wrongs of this decision, made in the interest, they say, of human safety. But really, we had a similar situation with a walrus here in Ireland where too many people were ignoring calls to give it space, and were getting close to the animal in order to take photographs. Fortunately, that particular walrus moved on, and left Irish waters before anyone got hurt.

On the flipside, much is being done to protect and conserve wild animals, and human intervention is often a good thing.

It’s a matter of stepping back and asking ourselves if our actions are necessary and informed, and if they are harmful or beneficial.

Nature does not belong in a cage.