Bonner says McFadden-Ferry not far away from Donegal return 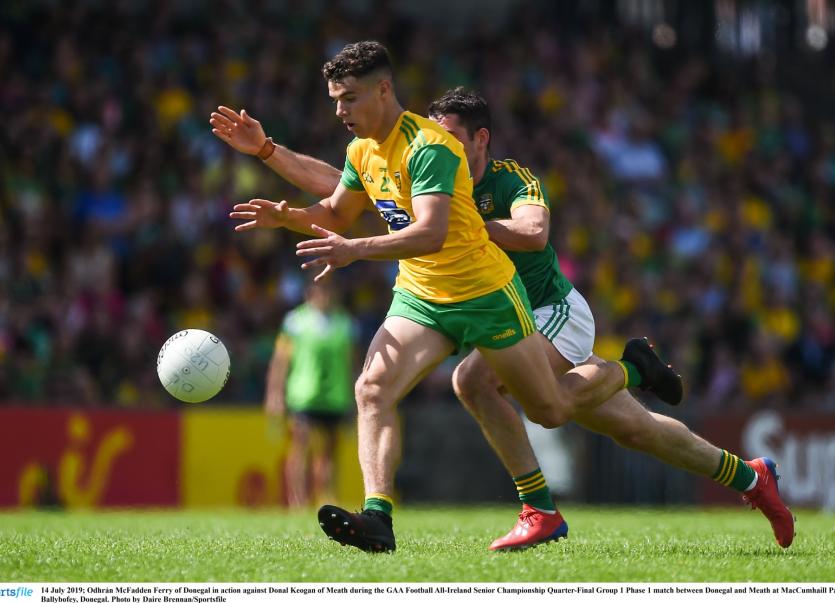 Odhrán McFadden Ferry may be back in the Donegal colours on Saturday night at Breffni Park. Photo by Daire Brennan/Sportsfile

Donegal manager Declan Bonner admits he is tempted to play Odhran McFadden-Ferry this Saturday night against Dublin in the Allianz League Division 1 semi-final at Breffni Park.

McFadden-Ferry made his inter-county debut in the 2019 Ulster SFC win over Cavan but has not played for Donegal in 15 months since Monaghan visited Fr Tierney Park in Ballyshannon prior to lockdown.

The Gaoth Dobhair defender missed the 2020 championship campaign as he was undertaking a six-month stint in Lebanon with the Defence Forces with the 28th Infantry Battalion, but having been an unused substitute against Armagh the weekend before last, isn’t far away according to his manager.

“He has been back training, he has had two weeks behind him and another couple of sessions and we will see where he is at," Bonner said. "He is not far away, he has missed a lot of football naturally and he has not played at inter-county level for over a year so he is just getting back up to speed again. He has had a couple of good sessions now and he is getting there gradually.

"His conditioning is very good, it is just trying to get up to match sharpness. If any team is going to test you out it is going to be Dublin but he is in good shape.

Donegal topped the northern section of Division One, following an 0-18 to 0-16 win in Omagh against Tyrone before a 1-20 to 4-11 draw with Monaghan and then another share of the spoils, 1-16 apiece at Armagh. Should they overcome Dublin on Saturday, there will be no league final with Down to come in the Ulster SFC preliminary round on Sunday, June 27.

"We have used 28 players in the National League campaign so far so we have used a lot of players," Bonner added. "You will probably see one or two more come in at the weekend, we just need to keep these guys and get lads up to speed. As I day championship is two weeks away from next weekend and that is going to be another test going to Pairc Eisler in Newry."