Donegal minors fall to derby defeat to Derry at Owenbeg 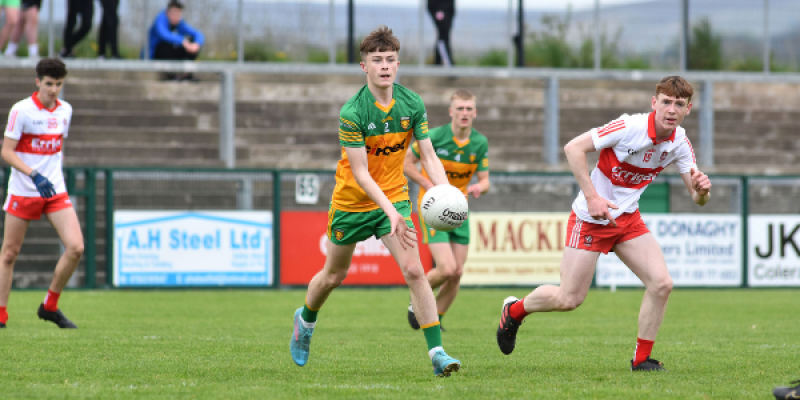 Donegal suffered a disappointing Ulster Minor Championship defeat after going down to Derry, who are one step away from a sixth Ulster minor final in eight seasons.

Derry, with the aid of a slight breeze, led by seven points at half-time and looked home and dry when Odhran Murphy slotted home a 42nd minute penalty putting Martin Boyle’s side 2-11 to 1-4 ahead.

While they never looked in any danger of losing, Derry went 24 minutes without a score to give them an area of focus for their semi-final preparations.

For the first three quarters of the game, Derry played like a team that had been together for years. They kept their width and rotated this inside forward to keep Donegal guessing.

When Donegal gave Cavan the blues

Donegal and Cavan faced one another four times in succession between 1989 and 1992 - all four of which provided pathways to the Ulster final, as Chris McNulty explains with Declan Bonner, Joyce McMullin and Tommy Ryan

Derry pressed Donegal right into their own half both on their kick-outs and their running game.  Goalkeeper Ben O’Connor continued his assured performance from the Armagh game and positioned himself on his own 45 on Donegal’s kick-outs and everyone pushed up a line.

Donegal had their chances to pull themselves back into the game, but lacked the composure in front of goal that Derry brought to the first half.

Like the Armagh game, James Murray started at full back where he picked up Daithi Gildea who had bagged 2-8 in Donegal’s win over Fermanagh. Derry’s collective defensive unit kept him to one point from a free. 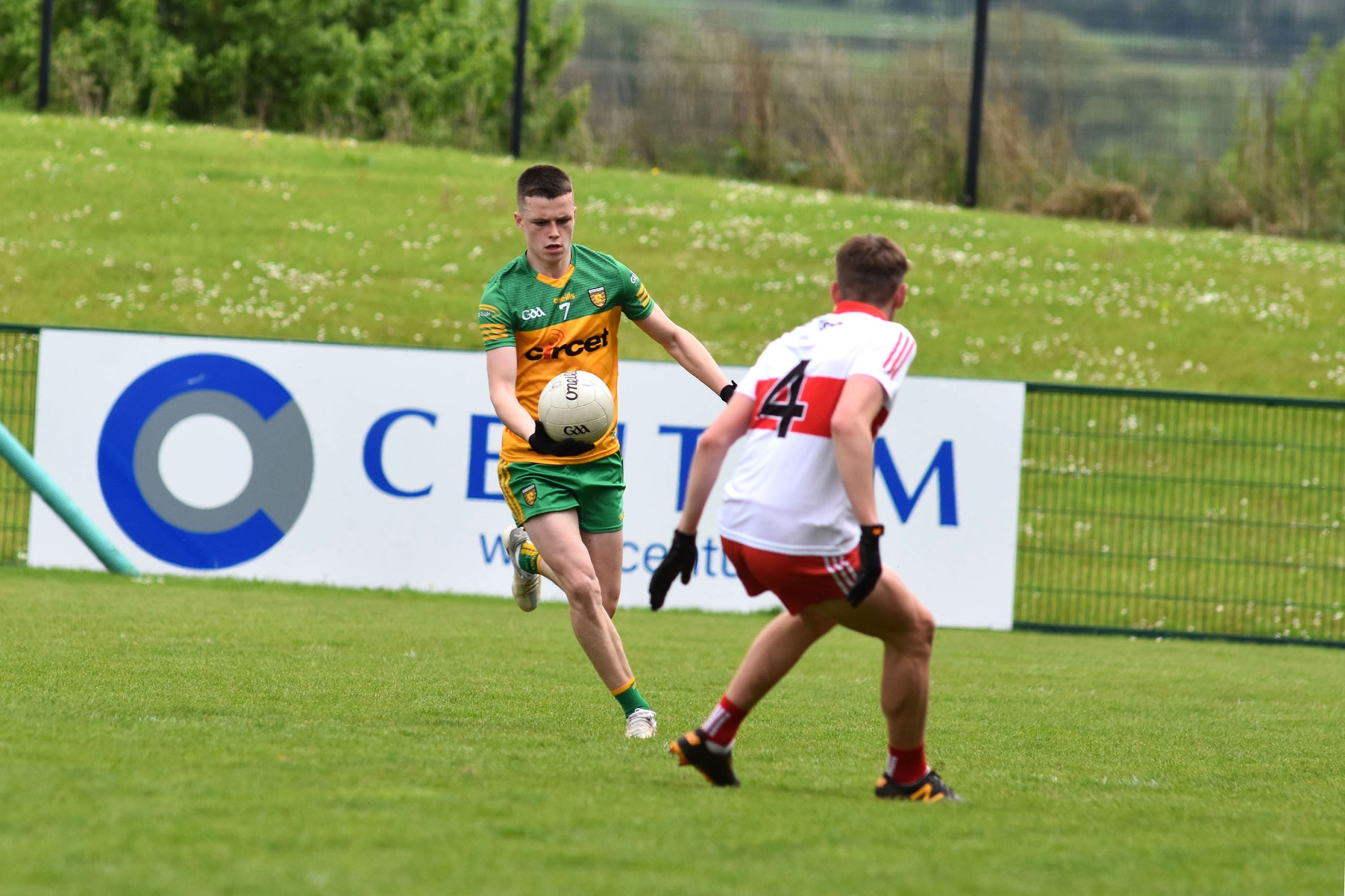 Aside from the move that led to the Donegal penalty, Derry’s defensive unit was exceptional in the first half. Their positioning was perfection.  Once a Donegal player took their third step, you could almost see the red and while jerseys closing down any glimmer of an opening.

When Donegal did score their penalty, Derry were caught out of position after giving the ball cheaply. It was the quickness with how they tracked back that stood out and James Murray made an excellent block.

The home side took control early on, but Spiers and Birt registered wides. From the second Donegal kick-out, Conlon kicked the ball straight to Ryan McNicholl who coolly lobbed to the net for a 1-0 to 0-0 lead in the fourth minute.

Donegal had a big chance in the sixth minute. A Lorcan McGee shot came down off the post where Cian McGee kicked over the bar with goal there for the taking.

Their running from defence then put Derry back on the front foot, with Chambers and Higgins – with two points each – adding scores to put them 1-6 to 0-1 ahead after 22 minutes. 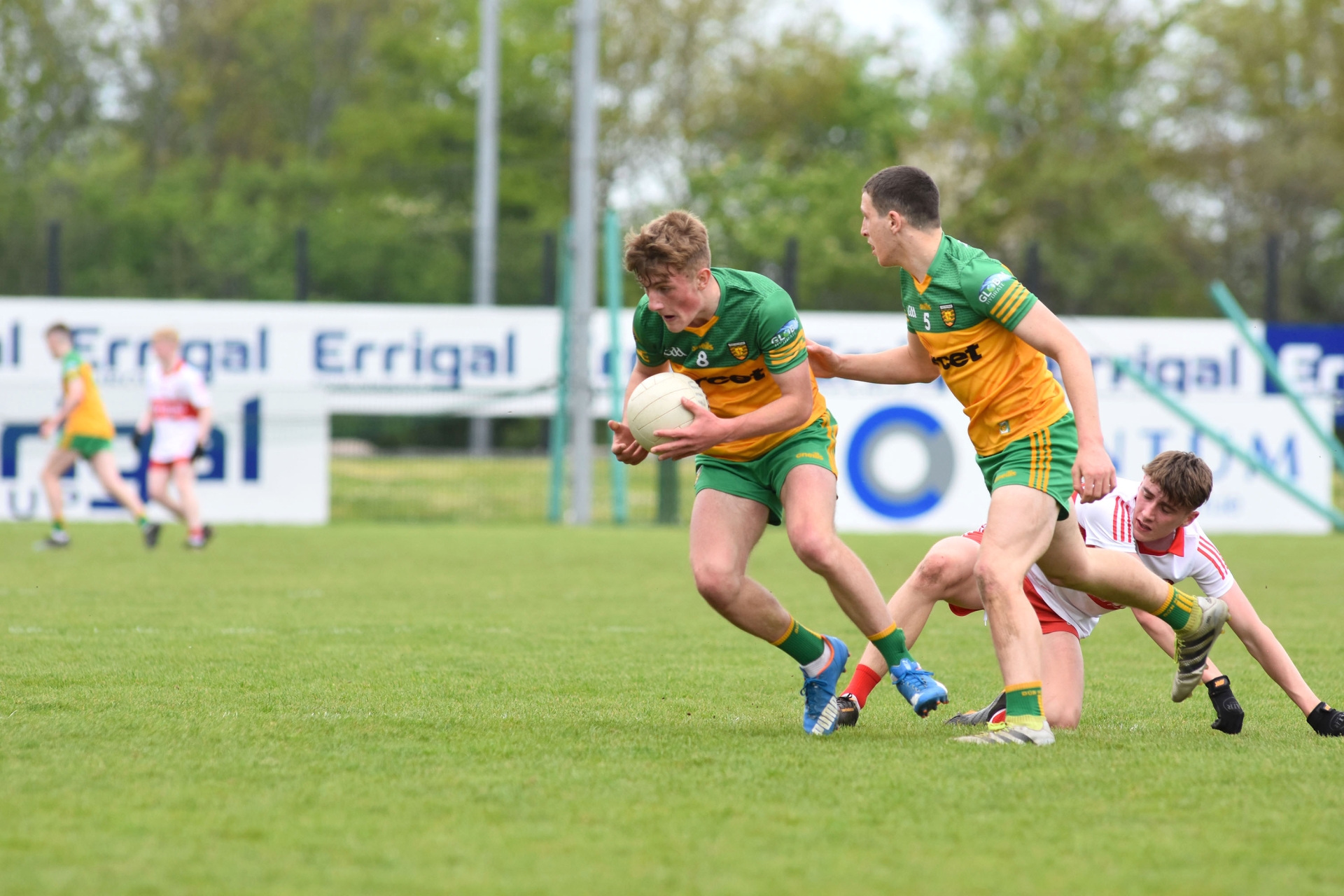 Derry controlled the first half in every sector before corner back Donal Gallaher popped up for his side’s first score in 18 minutes.

Donegal then found a way back into the game. Mark McDevitt got away from Fionn McEldowney who tugged him back and Cian McMenamin tucked away the resultant penalty.

Eoin Higgins thumped over a fine score from long-range, with Shea Birt and Chambers (free) giving Derry a 1-9 to 1-2 interval lead. Donegal had goalkeeper Conlon to thank for a block to deny Ciaran Champers a goal with the last action of the half.

Derry did have a chance for a second goal, but Conlon did well to deny Conal Higgins after a Cahir Spiers slide rule pass.

The pressure paid off three minutes later when Odhran Murphy tucked away a penalty he won himself and Derry were 2-11 to 1-4 clear.

Donegal started to get a foothold in the game and Derry needed a Dara McPeake block to prevent a half chance for goal from Daithi Gildea.

McGinty fired over a point and Karl Joseph Molloy blazed a goal chance wide as Donegal had their moments of control.

Donegal continued to carry the fight to Derry in the final stages, but never looked like finding the net and lack the composure to save the game with points.