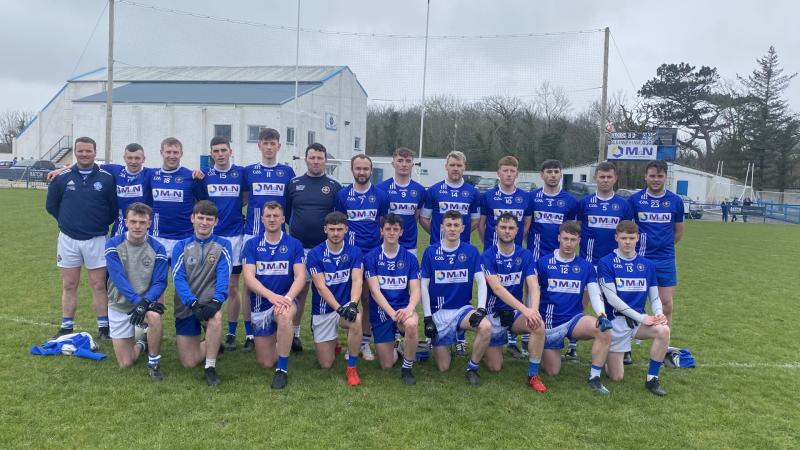 Conditions were perfect as Cloughaneely posted a fine win over Kilcar on Saturday evening at Páirc Naomh Fionán.

Two first half goals set Michael Lynch’s team on their way, with Cillian Gallagher grabbing both. Ciaran Scanlon added a third in the second half, with Jason Campbell netting for the visitors, who also saw Mark McHugh pop over three points and Oran Doogan four, with Ciaran McGinley sent off late on for the side managed by Conor Cunningham.

A point from McHugh and a goal from Cloughaneely’s Gallagher opened the evening’s proceedings with McHugh going on to score three more in the space of seven minutes followed by Doogan before the 15-minute mark. However, Kilcar losing Stephen McBrearty to a hamstring injury.

Although Cloughaneely’s Michael Fitzgerald had a goal opportunity, which was saved by Eoin Love, it took 17 minutes for the home side to get their next score which came from the boot of Shaun Maguire. This was shortly followed by Shaun Curran with another for the Páirc Naomh Fionán men.

Kilcar answered with two more from McGinley and Oran Doogan with McGinley picking up another point for the visitors before half time.

Cloughaneely saw out the first half out with Ciaran McGeady and John Fitzgerald picking up two points apiece and the man who started proceedings for the home side, Gallagher, rattled the back of the net once again to leave the score at half time, Cloughaneely 2-6, Kilcar 0-9.

Cloughaneely marched on in the second half with another two points coming from Curran and one from Gallagher before Scanlon scored another goal for the Falcarragh men with brothers Shaun and Martin Maguire following with a point a piece before the final whistle. Kilcar came out fighting after the half-time break with Doogan, McHugh, Conior Doherty and Michael O’Donnell all picking up points before they were left with 14 men after the sending off of McGinley.

Another point from Daniel Lyons and a goal from Campbell concluded proceedings for the Towney men as they suffered a five-point defeat.