Glenswilly turn on the style to easily see off Termon 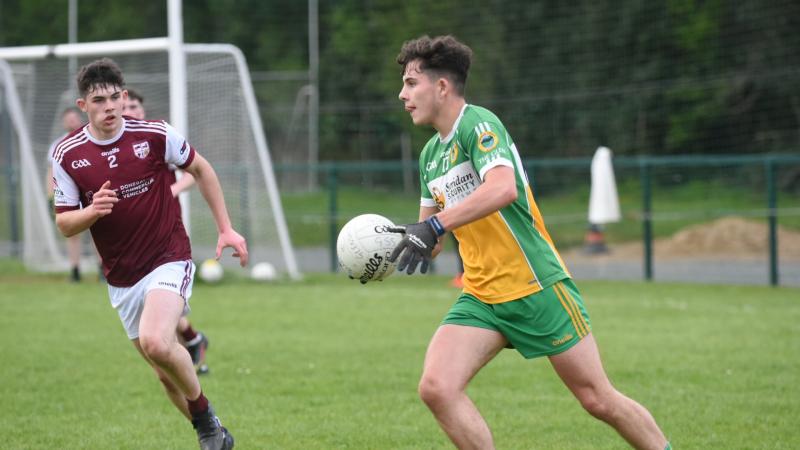 Gary Kelly of Glenswilly in possession as Conor Cassidy from Termon closes in. Photo: Geraldine Diver

There was a pep in Glenswilly GAA followers as the departed Pairc Na Columba on Saturday after watching their senior footballers overrun Termon.

A massive 13 points separated the sides at the finish as Padraig Bonner’s young guns chalked up their second league win of the season with Caoimhin Marley and Kealan Dunleavy grabbing the goals.

With Michael Murphy county-tied and Gary and Kealan McFadden both nursing injuries, Bonner fielded a largely young and inexperienced side led by veteran Caolan Kelly. But the manager might not have worried, with Dunleavy, Jack Gallagher, Marley and Shane McDevitt picking up the baton and Glenswilly turned on the style.


Playing a fast running game and mixing the quick hands short passing and the  long quick delivery they set their stall out from the off. They rattled off 1-2 in the opening 10 minutes. Marley finished off a sweeping move with the goal on the 10-minute mark.

McDevitt scored the two early points after Kevin McGettigan had opened the scoring for the men from the Burn Road with a well-struck point. And by half-time thanks to further points from McDevitt - who was on fire in the opening half - Sean Collum, Marley, Shaun Wogan, Kelly and Jack Gallagher they had raced into a 1-7 to 0-3 lead. Ricky Gallagher and the returning Enda McCormick hit the two points for the away team.

The game was McCormick’s first game since returning from London who played with the Allianz National League and Connacht SFC against Leitrim. Termon too, were down in numbers with among those missing Daire McDaid. Termon did hint of a revival on the resumption and thanks to points from McCormick and Bobby McGettigan the margin was back to six points. After that, Kelly had stretched the locals lead out to eight points.


But the game as a contest was well and truly ended shortly  after when Kelly and McDevitt combined to set up Dunleavy for goal number two and a 2-8 to 0-5 lead.

Despite the best efforts of Oisin Cassidy, Kevin McDaid, Ricky Gallagher and Bobby McGettigan there was no way back for Termon after Dunleavy’s strike. The game fizzled out as McDevitt and Dunleavy capped two brilliant performances with late points for a comfortable win for the locals that will move them away from the bottom end of the table.