SPORTS COMMENT: Donegal's review after Armagh defeat should go back to grassroots 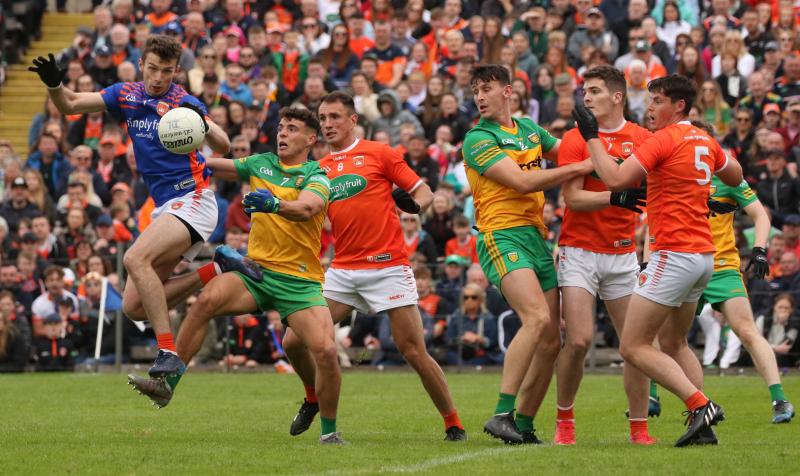 Sport should be more than about winners. But in a cruel way, it all comes down to that. For the second time in a couple of weeks, the Donegal footballers had to make their way back to the dressing rooms under the Gerry Arthurs Stand in Clones with heads bowed.

Supporters, well a good proportion of them, were already back in their cars and heading for home, some cursing and swearing. Others stayed and tried to provide some comfort.

But it is the players who have put their lives on hold and have to deal with the bitter disappointment. Their championship season is over after toiling from January, training and playing.

It is something that players experience quite a lot but probably something they never get quite used to. They will go back to their clubs and lick their wounds and then get back up on the horse again. It's what they do.

Was Sunday's defeat any different to what Donegal experienced at different stages of the championship over the last eight years - the last time they reached the All-Ireland final?

Did the defeat mark a fork in the road for the present team?

Did the defeat mark a fork in the road for the management?

Those are questions which have been debated by long and short-term supporters over the last few days. They are all valid questions and hopefully the debate will be civilised and within the boundaries of common decency.

When you look at the year overall for Donegal, from the Dr McKenna Cup in January through the league to our eventual exit from the All-Ireland championship on Sunday last, it has been a mixed bag.

MAC'S VIEW: Donegal have to regroup and freshen things up for next year

Donegal's All-Ireland winning manager, Brian McEniff says there is no need to panic but new blood will be needed after loss to Armagh

Sunday's defeat could well have been a watershed for the team. The nature of it had links to the Donegal collapse in Crossmaglen in 2010 at an almost similar stage. The defeat in Crossmaglen, though, came after a first round Ulster defeat. Sunday's was different in that they were recovering from the disappointment of losing an Ulster final narrowly to Derry.

It has to be said also that all four beaten provincial teams lost out last weekend, which showed that final defeat leaves a mark that a couple of weeks cannot heal.

Right away, fingers are pointed at management. They are an easy target and always will be. Next on the list for the ill-informed are the players.

Maybe we have to be practical and say Donegal are just not at the level at the moment. In the last few games we have played well in short periods, but not over a sustained time. The one thing that we seem to lack is real pace, and against the type of defensive systems being put in place by opposition at the moment, pace is the key to unlocking doors.

For the real issue regarding Donegal football at the moment, you have to go back to the roots - underage, development teams, minors, U-20s and the clubs.

They are all playing the type of possession football which isn't developing players who can play off the cuff, take off and beat defenders and create openings. The focus is on keeping the ball and if that means standing still and toe tapping the ball for a few minutes, then that's what they do. 'Keep it and let the other team come out'.

I've seen it at first hand at almost every club league game I've attended this year. And then you have supporters giving out about the county teams doing it.

It is almost a culture and it is undermining the chance of Donegal producing players who can make a difference. At the moment we are producing panels of players who are all being forced into a clone system.

And while it is taking us so far, it is not bringing success. Just look at the evidence.

The same game is being played by the ladies and they lost the Ulster final after extra-time.

Going back to Sunday and all the arguments about playing Michael Murphy on the edge of the square, how he was missed around midfield when the pressure came on!

Just look at the freedom given to Rian O'Neill and how he flourished in that role.

As we listened to Eamon McGee on Newstalk on the way home from the game, how right he was in saying that our focus should not be on Michael Murphy after every game; it's time to put the focus on what is not working.

The next few weeks will be spent taking stock and manager Declan Bonner will be given time to make a decision on his future.

But the future for the team will not be in the Na Rossa man's hands; that is down to the players being produced by club and development squads. Since 2014 we have been there or thereabouts but the graph is slightly downwards.

That suggests that we are not developing players to take us to the top level. We have it in our powers to change that.

There is one other worrying factor at intercounty level at the moment and that is the disconnect between the senior team and the paying public. There is no buzz being created around the senior team and the supporters are not buying in.  It's a two-way street here, the county team need to be connected to those supporting them and they can get a lift when they hear that roar on the big day. There is a need for better PR in this regard; give those supporters who are prepared to fork out hard-earned money, some information regarding injuries, team selections, player interviews, etc.

There is no need to give away trade secrets regarding tactics, etc., but if there is no connection then the public stay at home, as the Donegal support did last weekend. The result is a demoralising show of colours, as much as five or six to one.