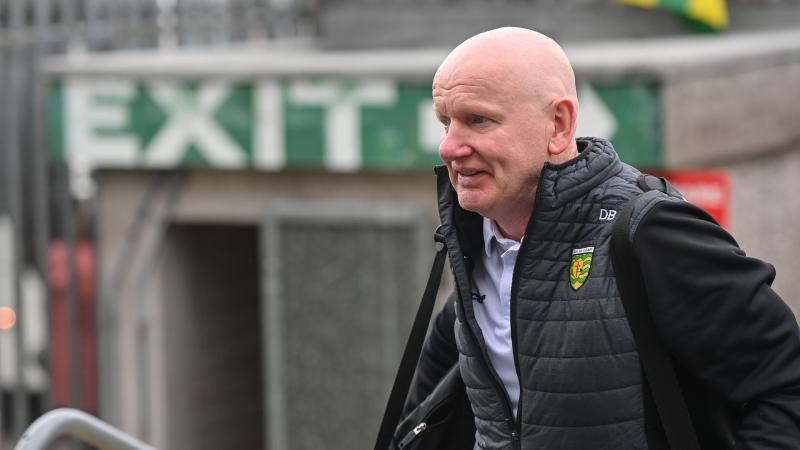 Declan Bonner has stepped down as the Donegal senior football team manager.

Bonner informed the county’s clubs of his decision at the July meeting of the Donegal county committee this evening.

Bonner was present at the Donegal GAA Centre in Convoy to deliver his end-of-term report to club delegates.

“It has been a great honour to manage this team over the past five years, as it was to manage the teams from u16 level up in the five years before that,” Bonner said.

“Highlights from my time in the role include competing in four Ulster finals and winning two of these, back to back, in 2018 and 2019. I am proud to leave the team playing league football in Allianz League Division 1 next year.”

Earlier in the week, Bonner conveyed his decision to the Donegal players and the Donegal County Board, who have now begun the process to select a successor.

The Na Rossa clubman vacates the role after leading Donegal for five campaigns having previously held the position between 1997 and 2000.

In all, the Lettermacaward man managed the Donegal senior team 104 times.

He said: “I would like to thank each and every player involved with the team over the past 5 years as well as every member of the management team during this period. Their commitment and work ethic was inspiring and working with them has been a privilege.

“Thank you to the County Board for their support throughout and in particular, our chairperson Mick McGrath for his support. We didn’t always agree on everything but both of us always had the best interest of Donegal at heart.

“Club is the heart of the GAA and I would like to thank all 40 clubs in Donegal, in particular my own club Na Rossa who have been a brilliant support to me always.

“I would also like to thank the genuine Donegal supporters, most of whom I know personally. Many have travelled the length and breadth of the country with the team and I know they will be back in the stands and terraces supporting the team next year.”

After succeeding Rory Gallagher in the position in September 2017 Bonner guided Donegal to Ulster Championship titles in 2018 and 2019.

Last August, Bonner was reappointed for a two-year term, but has decided to cut short his reign.

The Donegal County Board Chairman Mick McGrath said the Executive will select a three-person panel to liaise with interested parties and clubs have until August 15 to nominate candidates.

Bonner’s announcement ends several weeks of speculation surrounding his future since Donegal’s involvement in the 2022 All-Ireland SFC was ended by Armagh.

Donegal suffered a surprise defeat by Cavan in the 2020 Ulster final while a 0-23 to 1-14 reversal at the hands of Tyrone saw them bow out of the 2021 race for honours.

In between his spells as senior boss, Bonner guided Donegal to an Ulster Minor title in 2014 having won the Jim McGuigan Cup (Under-17) and Buncrana Cup (Under-16) in the previous two years.

He paid tribute to his wife, Catherine, and their children Amara, Christian, Arianna and Cillian ‘for their patience and support always.’