The ties that bind: Why Ramelton will have all eyes on the All-Ireland football final

Galway players Cillian McDaid and Sean Kelly can trace their roots back to Lennonside and so too can Kerry's Tadhg Morley. Indeed, there are family ties between the families of McDaid and Morley 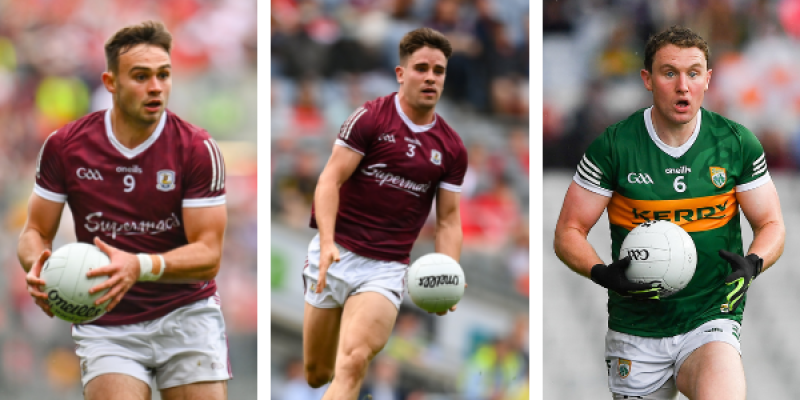 Cillian McDaid, Sean Kelly and Tadhg Morley will all feature in the All-Ireland final. Photos: Sportsfile

Ramelton will have plenty of skin in the game on Sunday when Kerry meet Galway in the All-Ireland senior football championship final at Croke Park.

Indeed, there are even links between the families of McDaid and Morley.

McDaid is the son of Garvan McDaid, a Galway-based Ramelton native whose brothers Fergus and Kieran played League of Ireland football for Cobh Ramblers and Galway United. Cillian’s grandfather, Eamon McDaid, was a Swilly Rovers player of some distinction.

Morley is a nephew by marriage of Eileen Glackin, nee McDaid.  Eileen happens to be a firs cousin of Garvan McDaid.

Ramelton will also have a close eye on Kelly, who is a nephew of Philomena Friel, the former Principal at Scoil Mhuire, Ramelton.

The Kelly brothers - Sean, Paul ad Eoghan - played alongside their cousin Seamus Friel from Ramelton, who was in goals for Moycullen as they defeated Mountbellew Moylough by 2-12 to 1-11 in Pearse Stadium, Salthill, to lift their first ever Galway SFC crown in 2020.

Ramelton native Friel is a teacher at Clarin College, Athenry, and was part of the St Eunan’s College team who won the MacLarnon Cup in 2000, playing right half-forward alongside the likes of Colm McFadden, Rory Kavanagh and Neil Gallagher.

He played underage football for Moycullen, where he spent his summers, and played football locally for Swilly Rovers, alongside his brother Damien, who won an FAI Schools Dr Tony O’Neill Senior Cup in 2004.