Sean MacCumhaills will take on Milford in the play-off following an eight-point home win against St Naul’s. 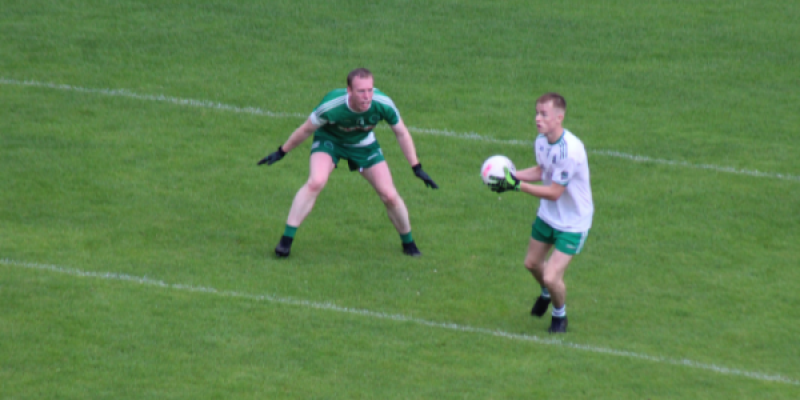 Sean MacCumhaills will face Milford in a promotion play-off next weekend after posting an eight-point win over St Naul’s in a Ballybofey downpour on Saturday evening.

Joel Bradley-Walsh hit 1-4 for the Twin Towns men, the goal coming from a penalty nine minutes from time.

Bradley-Walsh drilled home after Gary Wilson, who scored five points, was hauled down.

A Barry Rose goal in the 38th minute had given St Naul’s a glimmer, but Wilson and Bradley-Walsh helped pull MacCumhaills clear.

The side managed by Darren O’Leary and Mark O’Sullivan will go up against Milford with Downings’ win over Buncrana at The Scarvey giving them a place in the Division 2 final.

The ties that bind: Why Ramelton will have all eyes on the All-Ireland football final

Galway players Cillian McDaid and Sean Kelly can trace their roots back to Lennonside and so too can Kerry's Tadhg Morley. Indeed, there are family ties between the families of McDaid and Morley

Jamie Keegan, who popped over an earlier effort from the ’45, was closer with his second of the evening, which opened up a 0-6 to 0-1 lead for MacCumhaills.

Chad McSorley and Bradley-Walsh had MacCumhaills off and running and they almost had a goal in the 12th minute.

Carl Dunnion shipped a heavy knock as he went to prod a loose ball the way of Brendan McLaughlin. A subsequent ball inside presented Gary Wilson with a goal chance, but goalkeeper Cathal Charlton managed to divert the ball around the back.

Bradley-Walsh sailed over the ’45, belying the testing conditions facing place-kickers on the evening.

Already-relegated St Naul’s, who have been without Peadar Mogan since he left for a short spell in the US following Donegal’s exit from the All-Ireland race, were minus county full-back Brendan McCole due to an injury.

Stephen Griffin and Michael Coughlan hit two in a minute for the Mountcharles outfit, but Keegan’s third of the game had MacCumhaills five in front, 0-8 to 0-3.

A Griffin brace brought St Naul’s a little closer, but MacCumhaills had a 0-9 to 0-5 advantage at the short whistle after Bradley-Walsh curled over when he found a pocket of space in added time.

Rose applied the final touch for a St Naul’s goal eight minutes into the second half, but MacCumhaills hit 1-5 in the next 15 minute, with young Kevin McCormack (2), Wilson (2) and Bradley-Walsh on target with the points and the latter smashing home the penalty to seal the deal.