Watch: Manus Boyle: ‘You might have heard me shouting go for those kicks’ 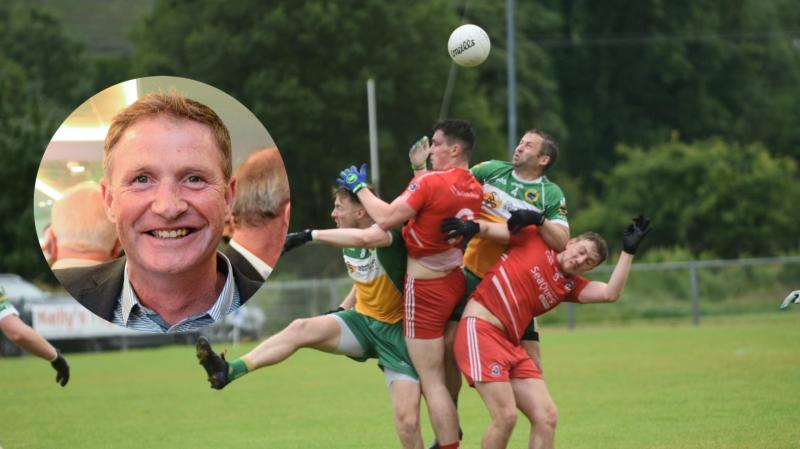 All hands to the pump between Killybegs and Glenswilly in Glenties and, inset, Manus Boyle. Photos: Geraldine Diver

Delighted and relieved Manus Boyle saluted the courage and character of his young Killybegs charges as they stormed back for a famous 0-10 to 0-9 victory over fancied Glenswilly in a thrilling relegation play-off in Glenties.

Boyle, Barry McGowan, Antoine O'Hara and Shane Molloy’s young men were expected to put up a good fight, but virtually everyone was fancying Glenswilly especially as they had already beaten Killybegs in the League.

But Boyle said the group had great belief and it all came right on a mostly mizzly Saturday.
“I know these lads since they were 12 or 13 years of age and I have coached them and maybe without the success that others would have liked,” he said. “But it is about developing people, developing men and developing them into the community and the GAA.

“I mean these guys typify all that is good and there were people from Kilybegs who did not think we were going to win today, but within our group we had a plan.

Killybegs strike late to survive and relegate Glenswilly to Division 2

In a dramatic relegation play-off in Glenties, Glenswilly looked to be in the driving seat for the most part only for Killybegs to muster up a comeback in the closing stages to save themselves


“We have a lot of people working behind the scenes - Anthony O’Hara works along with myself, Barry McGowan and Iarla Cox and we work hard together as a group. It is not about an individual, it is about getting the best players out all the time. We set a few standards that maybe were missing this last while and these lads are getting there”.

A candid Boyle admitted that the Fintra-based club’s campaign wasn’t as they had hoped, having picked up just eight points from the 12 outings.

“We struggled getting bodies on the pitch and this is the first time that we have had a good 20 players to pick from and that is important,” he added. “But, kicking on from here for the championship, we just have to start working harder and believe a bit more in ourselves”.

With nine minutes to go Glenswilly were two points up and playing with the wind and Boyle also saluted the sheer accuracy of Conor Cunningham.

“Conor since he was 12 or 13 has been capable of that and you might have heard me shouting from the line to tell him to go for those kicks,” Boyle added. “But to be fair to Glenswily they depend a lot on four or five lads and they kept them in the game.

“Both sides realised that this was not where we want to be for what we want to be fighting for at the end of the season. We want to be up the table and we want to be preparing for the championship. We have stayed up and we will park that and go back at it again”.

And Boyle is hoping that Seamus Óg Byrne and Hugh McFadden will be back as soon as possible to strengthen the panel ahead of the visit of Glenfin in the Donegal SFC opening weekend in three weeks’ time.

“Seamus has been working very hard, possibly harder than all of the rest, to be back,” Boyle added. “Hopefully this result will give him a big lift and we are waiting on Hugh McFadden to come back after injury.

“We hope to get him back on the pitch next week. This is a great group, and they are sticking together and only John Ban and Christopher Murrin are over 26 so this is a very young team, but they showed great spirit out there today.

“They were two points down into the wind and they dug deep, and they do that every Tuesday and Thursday night as well. That is a tough opener, but we will prepare for that. We are a proud club, and we like our Division 1 status because we feel we have the footballers to be there, but we will work hard to develop that”.