Anthony Doogan, Moville's joint-manager, said it was a disappointing conclusion to the Division 2 campaign with his side relegated due to a walkover victory picked up by Red Hughs over Gaeil Fhánada 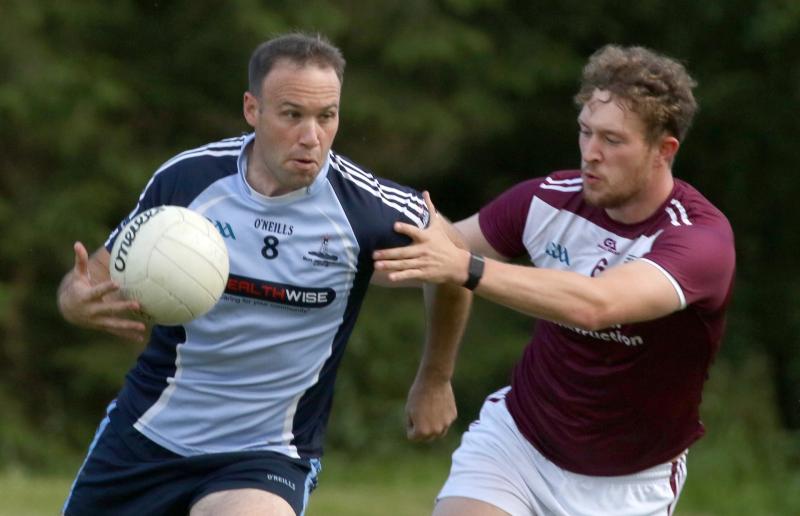 Moville's Malachy McDermott tries to get past Pettigo's Matthew Gallagher during the Junior A Championship in Pettigo on Saturday evening. Photo: Thomas Gallagher

Moville joint-manager Anthony Doogan believes the integrity of the Division Two League was “rendered a little bit suspect” after they were relegated as a result of Gaeil Fhanada not fielding against Red Hughs last month.

The two points awarded for the walkover victory ensured that Red Hughs were safe for another year in Division 2 but meant that Moville lost out on a possible play-off.

“We were very disappointed, and the intention of the County Board was that every match would be played at the same time so that no team would have an advantage,” Doogan, who shares the managerial responsibilities with Eamonn Reddin, said after Moville’s 2-16 to 1-9 win in the Donegal Junior A Championship opener on Saturday.

“We agree with that philosophy but because one team gave another team a walkover it meant that the integrity of the league was rendered a little bit suspect because of the walkover on the very last day.

Doogan admitted that his team also failed to field against Letterkenny Gaels earlier this season. On the day of the scheduled fixture between Red Hugh and Gaeil Fhánada, Moville’s last fixture was postponed due to a waterlogged pitch when St Mary’s Convoy the visitors. However, a week later Moville were comfortable winners in the rescheduled fixture on a 6-15 to 1-14 scoreline.

“We are no angels, we gave a walkover at Easter and we just did not have the players and it happens from time to time,” Doogan added.

“But it was very disappointing that we ended up playing Convoy and beating them well and had it been a match where Gaeil Fhanada had beaten Red Hugh’s we would have ended up being in a play-off match with Convoy. We are disappointed about that, but such is life”.