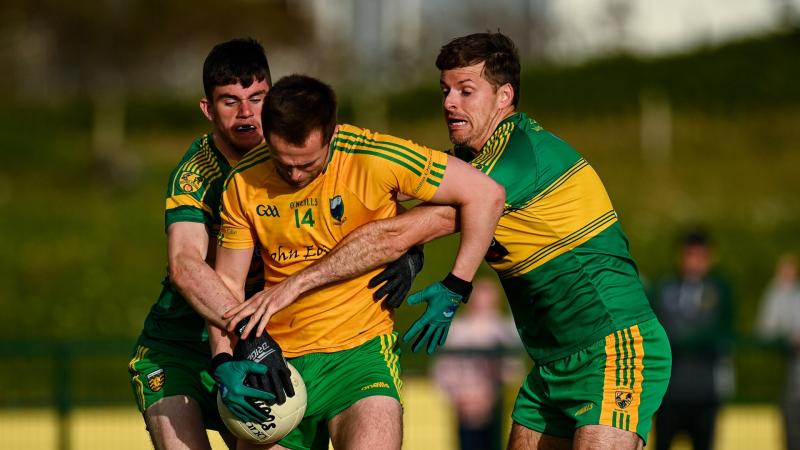 Naomh Columba were convincing winners with a ruthless second half display which yielded seven goals against St Mary’s from Convoy in Donegal IFC.

Following on from last week’s victory over Naomh Bríd, it’s two from two for Patrick J McGinley’s team, while St Mary’s are still on the lookout for a first point having lost to Buncrana in their opener.

It was 0-6 to 0-1 in favour of Naomh Columba midway through the first half with points from Lanty Molloy, two, Eric Carr, Phillip Doherty and a pair from Ryan Gillespie, with Joseph McGill with the reply for the visitors.

St Mary’s John Toye popped over two - one from a mark - before another Carr point in the 27th minute - but Convoy took the last score from  McGill to leave the half-time score 0-8 to 0-4 in favour of the hosts .

The second half was barely a minute old when a Lanty Molloy pass to Aaron Doherty, who fisted it across goal for Kevin McNern to fist to the net.

Aaron Doherty got a free before Joe McGill fired over and a Ryan Gillespie free followed by a mark from John Toye.

Then the goals came in abundance - through Carr, McNern scored his second after a delightful pass from Paul O Hare,  Ryan Gillespie and Molloy.

St Mary’s mustered points from McGill and Pauric Gordon. O’Hare’s point was followed by a Philip McNern goal - Naomh Columba’s seventh. Eric Carr got his second of the game before Kevin McNern put over the bar as the full-time whistle went.