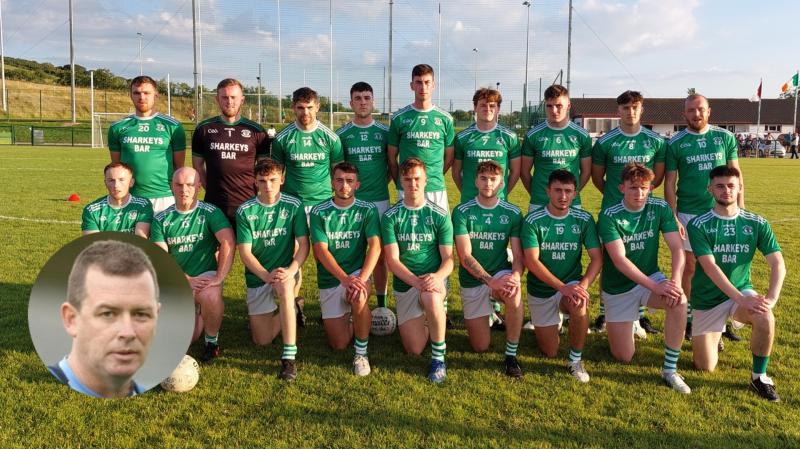 The pandemic holds few good memories for anyone and the reintroduction of the water break had something of an impact in Termon last night.

With the hot weather, the Donegal CCC decided - for one weekend only for definite - to bring back the breaks, which were a facet during the 2020 and 2021 seasons.

By the time of the first one at the Burn Road there was only a kick of the ball between Termon and Naomh Muire - a fantastic score from Anthony Grant to make it 0-3 to 0-2 for the home side - but from there onto half-time it was all one-way traffic with the home side kicking seven out of the next eight scores to go in 0-10 to 0-3 in front.

Termon were certainly more aggressive in chasing down Declan Ward's kick-outs, although the significant change in the contest's pattern when the bottles were taken back to the sidelines, did bring back memories.

“It was an issue at all levels during covid and I wasn’t a big fan of it and I’m still not a big fan of it,” Naomh Muire manager Danny O’Donnell said of the water break after his side’s 2-13 to 0-11 loss.

“It disrupts the flow of the game and you’re basically playing four quarters. The game was settled going into the first half water break and then after it Termon went at it more and won a lot of kick-outs. It had an influence and it is what it is. Needs must and all that. We probably won’t see it next week but look, the better team won tonight and there’s no doubt about that.

“We knew coming here was going to be very tough against a Termon side on their own patch. They’d been playing Division 1 football all season and we came from Division 3 so really what we wanted was to get performance out of the lads.

“For 15 minutes it was cagey and we were happy enough but then Termon put the big squeeze on us after the water break.”

O’Donnell said he had mixed emotions and although an eight-point loss looks quite conclusive on the scoreboard, there were only three points between the teams as late as the 57th minute before Daire McDaid struck two Termon goals.

All in all, O’Donnell had little qualms about the result and following on from an excellent opening round win over Malin at the Banks last weekend, his side welcome Gaeil Fhánada next week with a place in the Donegal IFC quarter-finals up for grabs.

“Mixed emotions to be honest,” he said of the showing on Friday. “Termon dominated midfield and went in at half-time seven up and that second quarter was the winning of the game really. I didn’t want to say that the game was gone at half-time but it probably was. What we wanted to do then was get something out of the second half and see if we could play on their nerves.

“The boys - I have great admiration for them - and in that second half they did very well. We went man-for-man with a different shape and got back into the game before they got the goal on the break to kill us. I’m happy enough with the second half.”

In May, Naomh Muire were soundly beaten on a 0-14 to 1-4 scoreline at Páirc Uí Shiadhail by Gaeil Fhánada in the Junior Comórtas Peile na Gaeltachta final although now the sides meet in the IFC with Mullaghderg playing host.

“We played Fanad in the Gaeltacht final and they beat us well but we’ve home advantage and we’ll have to draw on that having got a good result against Malin at home,” O’Donnell added. “We’ll try and give ourselves every chance. If someone told us at the start of the championship if you won two home games then you’d get through we’d have taken it.”