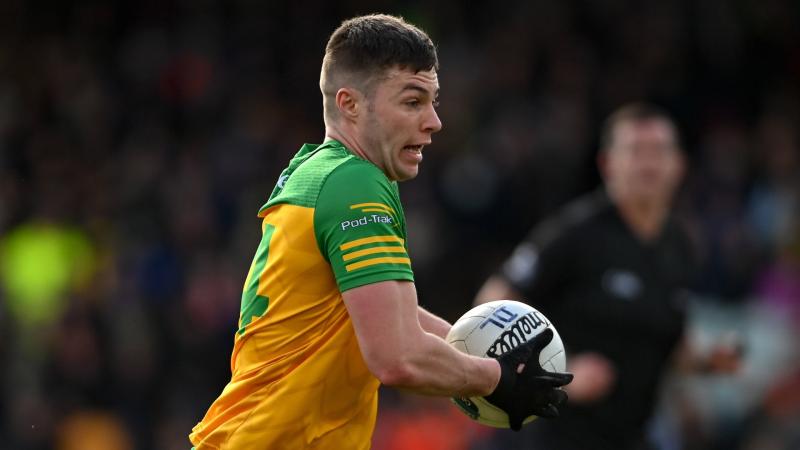 Conor O'Donnell had a big impact for Carndonagh on Saturday. Photo: Sportsfile

There were times when the natives around Foden felt restless as a dogged Urris pushed them to the limit, but Carn are now the last Inishowen side standing in Championship football this year.

The sides were level at 0-5 apiece at half-time and the Páirc Uí Dochartaigh scoreboard was unchanged by the time O’Donnell was sprung into action in the 43rd minute.

Padraig Doherty had said last month that O’Donnell wouldn’t be forced back until he was at full tilt. On the evidence of his 20-minute appearance here, he could have a big say in the destination of the Dr McCloskey Cup.

Urris twice moved ahead, through Pearse McCarron and Alan Friel, but Carndonagh responded each time.

O’Donnell drilled over in between the Urris brace and, after Friel delightfully spun over off his right foot, Carndonagh struck gold.

Donal Doherty cut in from the left-hand side and his ball in was brilliantly flicked on by Fergal Doherty to the waiting Ryan Kelly. The midfielder made no mistake in arrowing past Jonathan Noone, the Urris goalkeeper.

O’Donnell teed up Cian Doherty to move Carndonagh 1-8 to 0-7 in front, but the visitors drew level eight minutes from the end when Dean Kelly batted to the net from Dean Harkin’s raking ball into the danger zone.

The next score was vital - and O’Donnell duly landed it for Carn. The Donegal senior panelist, who is just inching his way back from an injury, added two more points, one of them a free, to seal Carn’s passage into the semi-finals.

Urris got into their gear midway through the half and hit three in as many minutes, via Oisin Devlin, McCarron and Conor Bradley. The latter arched over after Dean Kelly swept the ball his way following a neat move involving John McCarron, Oisin Devlin and Gavin McDaid.

Goalkeeper Noone converted a ’45 and Bradley slammed over a fine point to put Urris 0-5 to 0-3 in front, but Carn were level at the interval as Fergal Doherty, from a free, and Eoghan Kelly got in on the act.

Urris fashioned a 40th minute goal chance when Dean Kelly surged through and fed Matthew Brennan, whose shot was superbly saved by Kyle Harkin in the Carn goal.

With Urris keeping themselves in the mix and Carn not troubling the white flags, O’Donnell was summonsed - and it proved the decisive move as Carndonagh got their name in the hat for the semi-final draw.