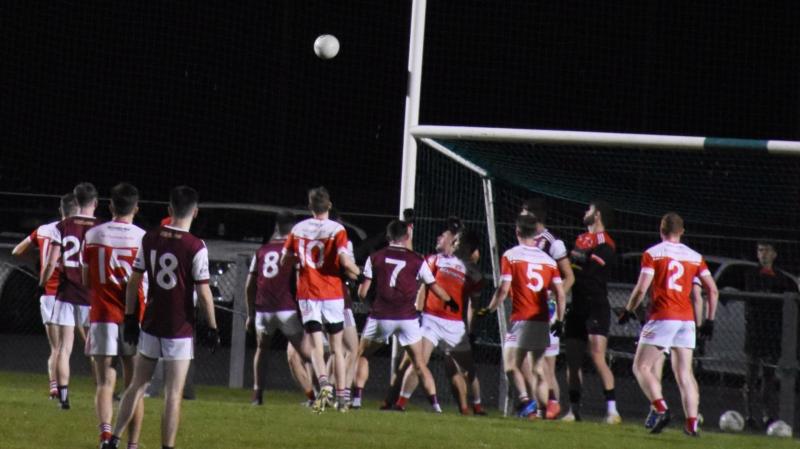 All eyes on a dropping ball towards the Dungloe goal against Termon. PHOTO: MARY BONNER RODGERS

Dungloe are looking forward to a second successive Donegal IFC final after a hard fought semi-final win over Termon at Ardara’s Pearse Park.

Just four points separated the sides at the finish but Dungloe - who had  to work harder for scores - were the better side for most of the 60 minutes. And while Termon threw the kitchen sink in the closing 10 minutes, Dungloe held firm.

Oisin Bonner,  Mark, Darren and Barry Curran, along with Conor O’Donnell and Gerard Walsh all turned in big performances for the men from Rosses Park. And young Karl Magee, who is just out of a minor, capped top drawer performance with three brilliant points.

Dungloe got off to a flying start and had three points on the board before Termon had their first shot at the posts. Oisin Bonner then converted from a close in free on 12 minutes and Dungloe were 0-4 to 0-0 in front. Magee got up from wing back to kick the game's opening score.

Termon were ultra defensive with 15 men back in their own half but finally got off the mark courtesy of a 13-metre free after Jack Alcorn. Ryan McFadden had a great chance from close range before McCormack added a second for the Burn Road-based side.

McCormick pointed 35 metres after referee Sean McDaid adjudged that a Dungloe defender had interfered with McCormick's initial strike from a free 40 metres out. McCormack’s point  on 23 minutes was the last score of the half and the half-time score was 0-4 to 0-2 in favour of Dungloe.

Conor O’ Grady drew first blood for Termon and Daire Gallagher and McCormick traded frees as the second half took shape. McCormack’s strike reduced the margin to one as Dungloe led 0-5 to 0-4.

Dungloe responded with four unanswered points to move into a 0-9 to 0-4 lead with just under nine minutes of normal time remaining. And while Daire McDaid trimmed the lead back out to three Shaun McGee and Karl Magee closed out the game with late white flags.