Kavanagh pays tribute to the ‘commitment and dedication’ of Morrison

Manager Rory Kavanagh was full of praise for Conor Morrison, who made his first appearance for St Eunan's seniors in over two years in their Donegal SFC quarter-final win over St Michael's in Glenties 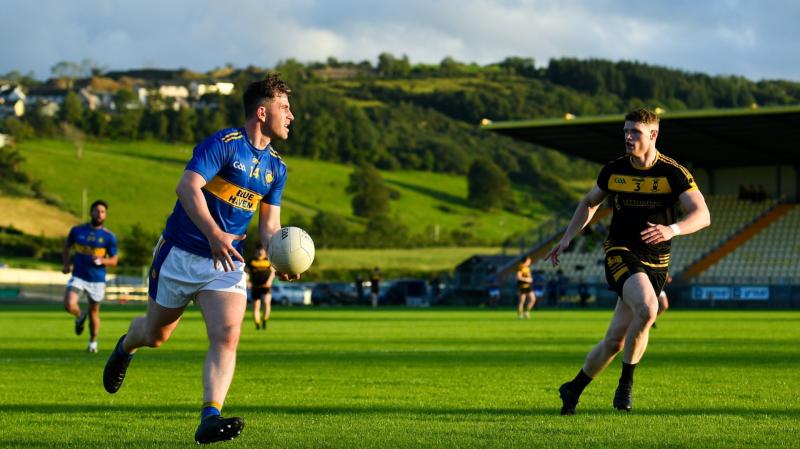 When Conor Morrison wasn’t part of the St Eunan’s Junior panel for their Junior A quarter-final clash with Na Rossa at O’Donnell Park on Saturday afternoon there was a whisper as to why.

Later that evening in Glenties, Morrison was a late substitute for Rory Kavanagh’s St Eunan’s seniors in their 2-15 to 0-5 win over St Michael’s in the Donegal SFC last eight tie.
For Morrison, it marked his first senior appearance in 25 months.

The then 24-year-old, who had lined out for Donegal in the 2020 Allianz League Division 1, sustained a complicated knee injury against Killybegs in Fintra, which included a severe multi-ligament injury, which included a ruptured ACL (anterior cruciate ligament).

“It’s great to be able to bring Conor Morrision back in,” Kavanagh said afterwards. “It was a huge journey for him to get where he’s at now and that’s testament to the commitment and dedication he’s shown over the last 18 month to two years. I’m really pleased for him. That’s what it’s all about, keeping the squad strong. He would remind you of Paddy McGrath in his approach.”

In regards the win, it was perhaps  the most impressive showing of the season from St Eunan’s, on a par with their performance in last year’s SFC final where they entered the contest against Naomh Conaill as underdogs before running out winners on a 1-11 to 0-4 scoreline.

“Job done from our perspective,” Kavanagh said of the win over St Michael’s. “I thought we were quite nervous at the start for maybe 10 or 15 minutes when we coughed up quite a bit of possession. Once we settled and got into our groove we started to tag the points on then.

“We’ve good variety up front between the running game and kicking but look, there’s still plenty of work to be done for us when you look at the first 15 minutes when St Michael’s were in that shape. We were sloppy at times.”

St Michael's felt the wrath of St Eunan's in what developed into a one-sided Donegal SFC quarter-final in Glenties, with joint-manager Raymond McLaughlin admitting Rory Kavanagh's team have a lot going for them

St Eunan’s were eight points ahead approaching the midpoint of the second half and although it was unlikely they would be caught at that, goals from Ciaran Moore and Conor O’Donnell snr made absolutely sure of their progression to the semi-final.

“They were finished well,” Kavanagh added. “Ciaran Moore broke inside and took his chances and then same for the second one. That was the pleasing part of it. We might’ve been more clinical in the first half when we broke and Eoin McGeehin went close at the start of the game. Goals are always crucial and I suppose the two we got ended the contest.”