‘If we’re playing chess at home, we’d want to win that’ - Padraig Doherty

Knockout wins in the Junior Championship have been a rarity for Carndonagh, but manager Padraig Doherty was delighted with the resilience shown in Saturday's quarter-final victory over Urris 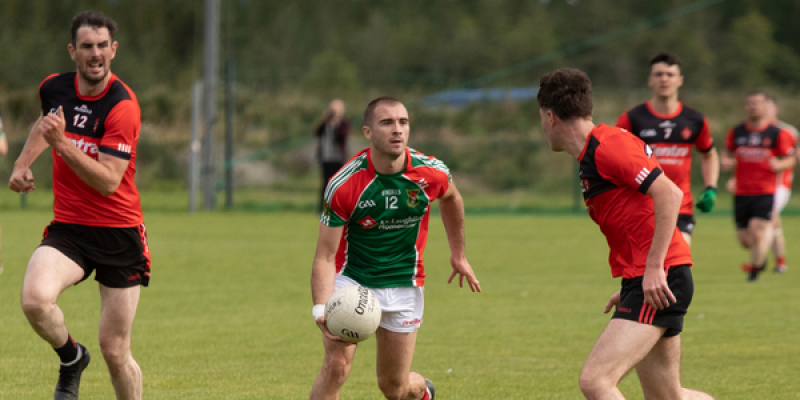 Eoghan Kelly on the attack for Carndonagh against Urris. Photo: Tom Heaney.

Padraig Doherty told how resilience was called for as Carndonagh defeated Inishowen neighbours Urris to book a place in the semi-finals of the junior championship.

An impressive cameo from the fit-again Conor O’Donnell and a Ryan Kelly goal gave Carndonagh the little pocket of breathing space they needed.

Carndonagh’s 1-10 to 1-8 win offered something of a rare knockout success for the Foden men.

“I can’t remember us winning a knockout game since we last won the junior (2008).

“It was important for us to win at home too. If we’re playing chess at home, we’d want to win that.

“We showed a good bit of resilience. That has sort of typified our championship performances at home this year.

“We keep going to the end. That’s going to be important no matter how far we get this year. Nobody remembers much beyond who wins a game.”

It was all square, 0-5 apiece, at half-time. It had been cagey and remained so in the third quarter. O’Donnell’s arrival added a new gear to the Carndonagh engine. Ultimately, it was his introduction that tipped the scales in Carn’s favour.

Doherty said: “Conor brings that extra wee bit of a spark to us. He brings a bit more confidence to anyone.

“It’s no different to any club, in any standard, when a county player comes back in, it’s a case of: ‘Right, we have to up it now too’. The standards are set again.

“A player who has played at that level coming in is an obvious lift for any club, even up at intermediate or senior championship levels.”

When Dean Kelly netted for Urris, it threw a gauntlet down to Carndonagh, but the home side responded with O’Donnell tacking on a point with the next attack, restoring a lead which they held to the finish.

Doherty said: “We had to keep our shape. The last couple of times we played here against the wind, we started at 100 miles an hour. Urris wanted to bring it down the stretch and they did.

“They got their goal and the next score was so important. We went back up the field and got a point. That broke their momentum after getting back into the game.”