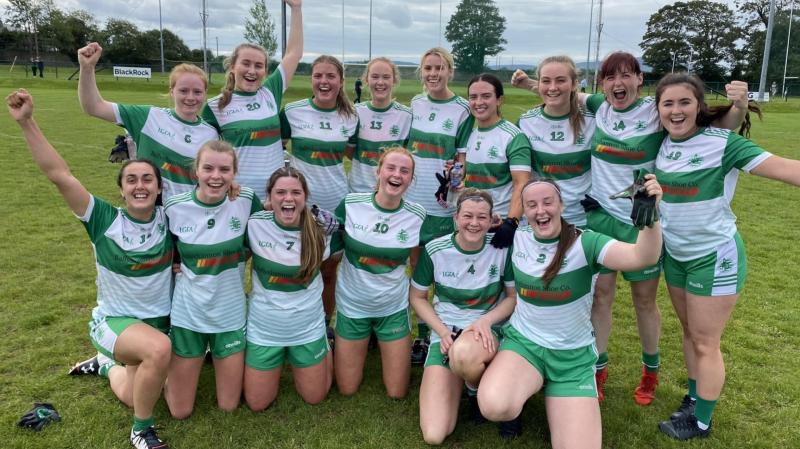 A super-charged second half display from Aodh Ruadh was enough to seal progression to the Donegal LGFA Intermediate Championship final against Ardara.

And once again it was the powerful Cait Gillespie and the ever-accurate Eimear McMahon, who provided the bulk of the scores for the home side in Ballyshannon.

The deadly duo finished with a total of 3-9 of Aodh Ruadh's total against a game Naomh Muire who made a real battle of it in the opening half. The home side led by 2-7 to 2-4 following an action-packed first half where Caroline Sharkey at full-back and Erica Hanna caused the excellent Tara Khan and her defence some anxious moments.

Aoibhinn McGarrigle and Caitlin McGarrigle opened the scoring for Aodh Ruadh. But they were rocked by a lightning goal from Naomh Muire's Kate Gillespie and points from Caroline Sharkey with McMahon responding for Aodh Ruadh to leave the visitors leading by 1-2 to 0-2 after 10 minutes.

McMahon replied with another point before Gillespie blasted to the net to put Aodh Ruadh ahead by 1-3 to 1-2.

Termon and Glenfin will once again contest this year's Senior Ladies Final in Donegal; the Intermediate Championship is also down to the last two where Aodh Ruadh, Ballyshannon and Ardara have made it through to the decider

But Naomh Muire looked deadly on the break and Erica Hanna found the net after a great pass from Saoirse Bonner. That super strike put Naomh Muire in front by 2-3 to 1-4 but the double act of Gillespie combined for the latter to goal and put them into a 2-4 to 2-3 lead as the frenetic pace never flagged.

It was point for point in the run-up to half time with Aoibhinn McGarrigle and McMahon on target for Aodh Ruadh and Sharkey replying for the visitors as Ballyshannon led by 2-7 to 2-4 at the break.

Not surprisingly the pace dropped on the resumption as Aodh Ruadh, aided by a slight slope and breeze, took a firm grip on the match and restricted their outgunned opponents to four points as they tacked on 2-6.

Gillespie and the athletic Caoimhe Keon got the goals while McMahon provided the bulk of the points with sub Ciara Cavanagh, and Ailbhe O'Donnell responding for Naomh Muire.