Naomh Colmcille impressive as they get the better of Na Rossa

Clarke shines as Naomh Colmcille are runaway winners in Dooey 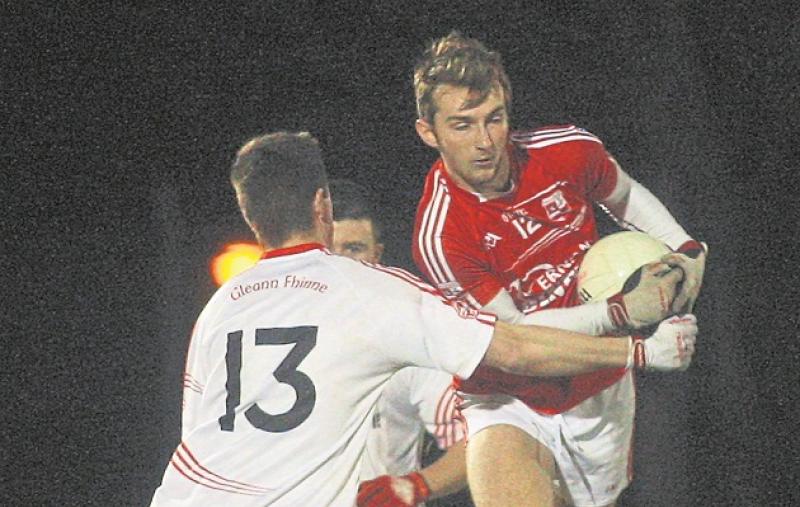 Stephen Gallagher was part of the Naomh Colmcille team which defeated Na Rossa on Sunday.

Naomh Colmcille took a giant step towards a place in the Junior A Championship semi-final with a comfortable win over understrength Na Rossa, in Dooey, this afternoon.

With 17 points between the teams at the finish this was as comprehensive as Naomh Colmcille could have wished for. After all Na Rossa are a particularly tough nut to crack on their home patch.

The locals have something of an injury crisis at the minute and were without key personnel including county U-21 Christian Bonner, former county minor John McDyer and regular midfielder Eugene Molloy.

They were also without the recently returned All-Ireland winner Adrian Hanlon, who is championship-tied.

In fairness to Naomh Colmcille, they made the trip west without two key men, Paul McErlain and Ricky Hegarty.

Naomh Colmcille played against the stiff breeze but led 0-7 to 0-4 at half-time having struggled at times to break down a well marshalled home defence.

Daniel Clarke, who went on to post nine points, hit four of the first half points.

Willie Gillespie (2) and Conor Grant were the other Naomh Colmcille scorers in the opening half.

The ever-reliable John Paul McCready, with two converted frees, and Odhran Molloy, who proved a real handful for Naomh Colmcille in the first half, scored the other two, both from play.

The game as a contest ended early in the second half after John Fullerton struck for the Naomh Colmcille goal.

That was on three minutes when following up a high lob into the Na Rossa goalmouth he first timed to the net when keeper Patrick Hanlon failed to hold McCrossan’s delivery.

The goal propelled Naomh Colmcille into a seven point, 1-8 to 0-4, lead.

And it did not get any better for the home side as Ryan McKinley’s men scored at will as they reeled off ten points without reply.

The win moves Naomh Colmcille onto five points and to the top of the Group B table after three rounds of games.

Naomh Colmcille have games against Convoy and Lifford still to play.

Na Rossa also still have two games to play but with no points from their three games played they are all but out of the championship race.

Daniel Clarke with his nine points was man of the match but he got a run for his money from Willie Gillespie, William Lynch and John Fullerton, while Matthew Crossan ended the game with three points, all in the second period from the top shelf.

Daniel Martin Melly, Caolan Devenney and Sean McMonagle marshalled the Na Rossa defence well until the dam opened in the second half.

Patrick Hanlon pulled off a point blank save to keep his net intact in the first half to deny Conor Grant from five metres.

Conor McCahill looked threatening every time he ran at the Naomh Colmcille defence and Odhran Molloy on a limited supply was dangerous up front for the locals.