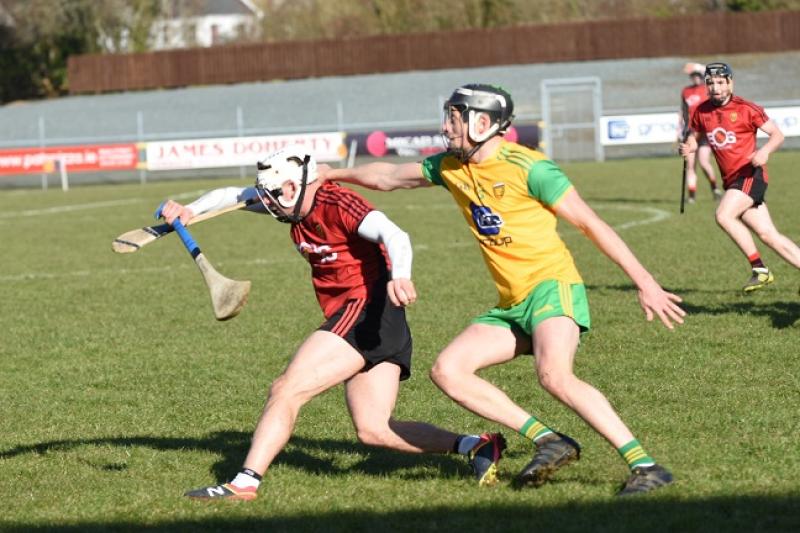 Action from the Donegal v Down game

Donegal have pulled off a shock and historic first win over Down in the Allianz Hurling League, in O’Donnell Park.

Donegal went into the tie as the raging underdogs with one win under their belts against table toppers Down.

And after a controlled and polished performance they came out on top with three points between the sides at the finish.
There was no fluke or no flash of good fortune about the win, Donegal were  full value for the three point margin.
They led by double scores 0-10 to 0-5, at half-time thanks to some wonderful point taking from Ciaran Mathewson, Lee Henderson, Declan Coulter, Sean McVeigh, Joe Boyle and Danny Cullen.

The Mourne men did cut the lead to three with three quick points to Donegal’s one in the early second half exchanges.

And they further reduced the margin to one by the three quarter mark.

But Donegal held their nerve and led by captain Danny Cullen, who had fantastic game, and thanks to a fantastic three point flurry in the middle of the second half courtesy of two Henderson frees and one brilliant point off the stick of Gerard Gilmore, Donegal went four up again.
And in an exciting closing ten minutes they held on with replacement Enda McDermott landing the last point to finally seal the victory, deep in injury time.

The win moves Donegal on to four points in the table and surely Division 2B status secured for next season.