Whale washed up near Ballyshannon 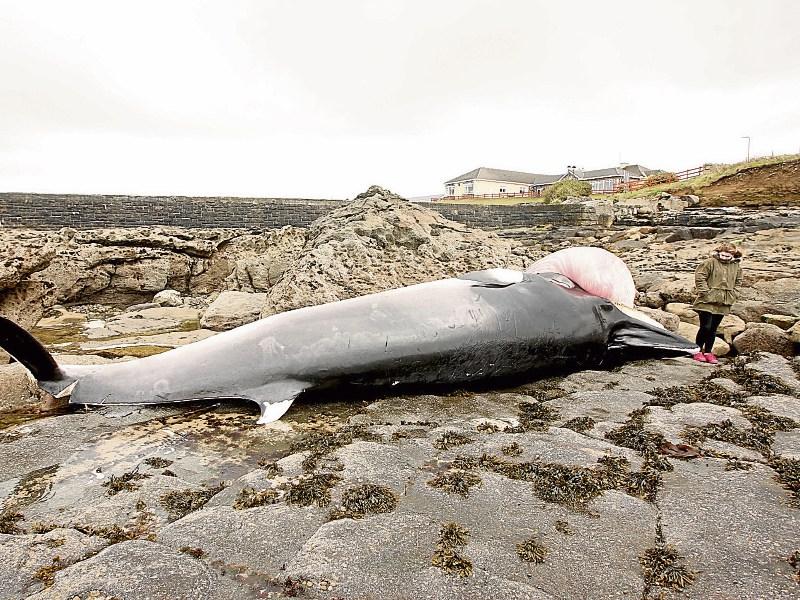 A dead minke whale washed up on rocks at Creevy Pier between Ballyshannon and Rossnowlagh on Wednesday evening/Thursday morning is attracting interest with increasing numbers of curious visitors arriving on Thursday evening to view the whale.

It’s reported that there was “a steady stream of people” coming to view the dead whale.

The dead whale was lodged on rocks approximately 50 metres ‘behind’ the pier on the Kildoney side.

At high tide it may well be taken out to sea by the tide but for the moment it has been in the same spot for the best part of a day at high and low tide.

Should it remain on the rocks its disposal will be an issue for the local authority in due course.

Although first ignored by whalers due to its small size and low oil yield, it began to be exploited by various countries beginning in the early 20th century. As other species declined larger numbers of common minke whales were caught, largely for their meat. It is now one of the primary targets of the whaling industry. There is a dwarf form in the Southern Hemisphere.

Our photograph, taken on Thursday evening shows Róisin Gallagher, a daughter of Donegal Democrat staff photographer Thomas Gallagher standing beside the whale to give a sense of size and scale.