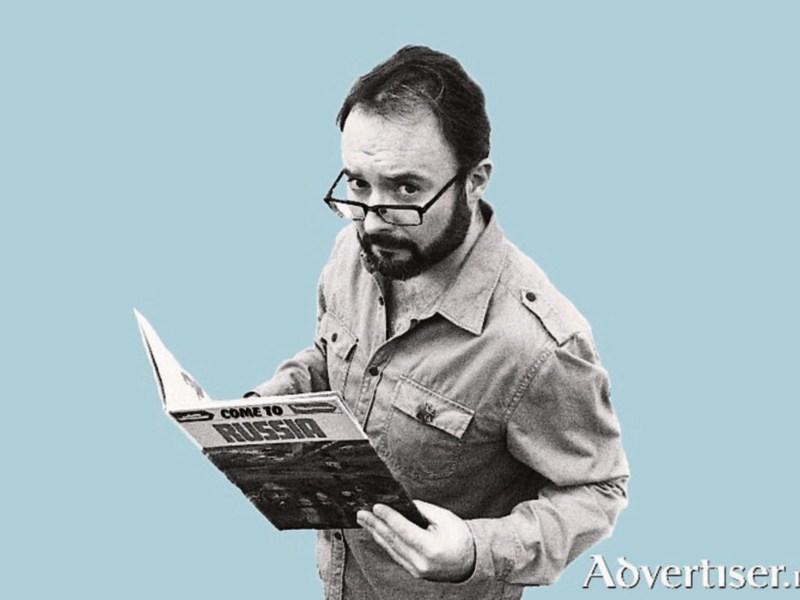 The Earagail Arts Festival is really hitting its stride this week. Here’s a quick day by day run down of what awaits in the week or so ahead.

Paddy’s a very talented comedian, writer and musician – he’s the band leader of The Camembert Quartet (The Late Late Show's house band) and a writer for the hit RTE Radio One series Callan’s Kicks.

His show Solutionism – a sellout success at last years Kilkenomics Festival – is his pointedly hilarious take on the state of Ireland and the world at the end of which he’ll have shown how to save the country €64 billion. Handy info indeed.

If music is more your bag, then check out Haitian voodoo roots band Chouk Bwa Libete who play The Regional Cultural Centre as part of the festival within a festival, Donegal International Folk & Roots Weekend.

Also part of the Folk & Roots weekend is a nice double header of a gig at The Regional Cultural Centre on Friday night. Four piece Dublin traditional folk group Lynched are joined on the bill by English folk band Stick In The Wheel.

Come Sunday, cast your eyes towards Home To Ballybeg at An Grianan Theatre, Letterkenny where acclaimed traditional composer, producer and multi-instrumentalist Manus Lunny has put together a specially commissioned concert dedicated to the legacy of acclaimed playwright Brian Friel. In addition to Manus himself, there’ll be an array of renowned traditional musicians on stage including Mairead Ni Mhaonaigh, Michael McGoldrick and Theresa Kavanagh.

Pearse in Pictures and more

Monday is an easy choice – there’s only one event listed in the Earagail programme. Pearse In Pictures is the story of the 1916 Rising illustrated live by artist Dara McGee with musical accompaniment in between the chapters of the story. It’s at Ionad Naomh Padraig, Dore on Monday 18th at 2pm and again at An Chrannog, Gweedore at 2pm on Tuesday 19th.

Also on Tuesday 19th, is Banyan Theatre Company’s Gruff – a stage adaptation of the popular kids story The Billy Goats Gruff. That’s at The Balor, Ballybofey at 3pm on Tuesday and also at The Holy Trinity Parish Hall, Dunfanaghy at 3pm next Wednesday.

Also on Wednesday, Follow The Hops combines a tour of the Kinnegar Brewery plant in Rathmullan with specially commissioned new performances by local musicians – that starts at 5. Remember, drink responsibly.

Finally there’s a trio of big hitting gigs on Thursday next,July 21st. Chapterhouse Theatre Company perform Wuthering Heights on the lawn of Rathmullan House at 3pm (pray it stays dry). There’s also the opening night of Unified The Musical which runs until Saturday at An Grianan Theatre and finally, the magnificent The Lost Brothers are at The Balor, Ballybofey with support from local trio Dearg Line.

You can check out the full festival line up and book tickets online at www.eaf.ie. Tickets can also be booked the old fashioned ways – in person or over the phone – at the festival box office at An Grianan Theatre Letterkenny (0749120777).

The headline theatrical event of Earagail Arts Festival 2016 is undoubtedly Unified The Musical which takes place from Thursday July 21st to Saturday July 23rd at An Grianan Theatre, Letterkenny.

In years gone by textile factory Unifi was by far the largest employer in Letterkenny. Over the course of more than thirty years, thousands of people would have worked there with every department it’s own tribe and every shift having it’s own personality. Lives were changed, skills learned, friendships forged, partners met and families reared on the wages. The employees personal experiences and the story of the factory as a whole is both a celebration of a Letterkenny institution and a fascinating social document in a time of rapid social change.

Unified follows the successful template used for the 2014 Earagail Arts Festival hit show Fiesta which was based on the famous Fiesta ballroom and the people who frequented it. Writer Guy Le Jeune (who also wrote Fiesta) has employed a similar research method for the script – interviewing ex Unifi employees and weaving their memories and stories into one rich tapestry (sorry for the obvious puns – couldn’t resist). The script is augmented by original music from Fionn Robinson and Aoife Toner’s choreography and it’s all brought together by director David Grant into one big rip roaring musical extravaganza featuring a largely local cast.

Unified The Musical runs at An Grianan Theatre, Letterkenny from Thursday July 21st to Saturday July 23rd at 8pm nightly. Tickets are €15 (€12 concession0 available from An Grianan on 0749120777 or online at www.angrianan.com