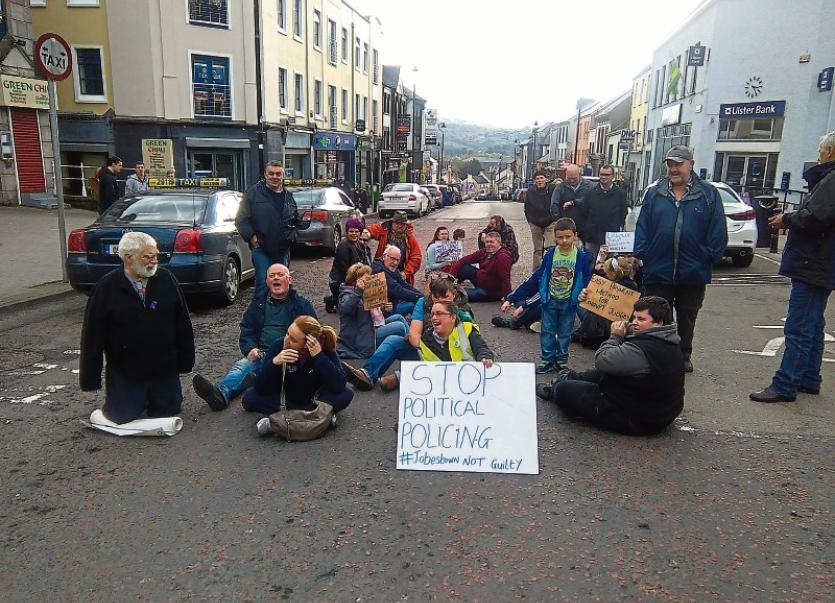 The sit-down protest in Letterkenny

Customs officers left an eight months pregnant woman at the side of the road in Donegal last week when they seized her car because it was northern registered.
The facts are disputed but it seems the woman's own car, which is southern registered, was being repaired and she was supplied temporarily with another vehicle by her garage in Strabane.
The rights and wrongs of that seizure have already been well aired on the BBC, Highland Radio and in a number of papers in Inishowen so I have little to add in this particular case.
It was what happened afterwards I found unbelievable. When contacted the Revenue Service's press office said that while they couldn't comment on individual cases customs officers always acted in a 'fair and proportinate manner'.
Eh? Run that by me again...seizing a car from an eight months pregnant woman and leaving her at the side of the road is 'fair and proportinate?'
If that's the definition of fair and proportionate I suppose hanging and flogging might be considered a wee bit over the top.
As a former cross border worker this whole seizing of vehicles under VRT Tax rules is, for me, problematic. Firstly, Ireland is breaking EU law in regard to Vehicle Registration Tax. That's fact.
There was supposed to be free movement of goods and services within the EU. That's not happening.
Secondly, the Revenue services have been ruled against on several occasions by the EU Ombudsman's office in regard to the seizing of vehicles at the side of the road but they just ignore that.
And, thirdly, and most importantly, cross border workers are a victim of the partition of this country.
It's not like living in Kerry and working in Cork. Living in Donegal and working in Derry/Tyrone/ Fermanagh is very different because workers are hit by high southern taxes and charges and low northern salaries.
The unfairness is deeply felt by people in this situation.


Can't agree
Last Friday Judge John King ruled that a 15 year old youth had unlawfully imprisoned the then Tanaiste, Joan Burton, during an anti water charges protest at Jobstown in Dublin two years ago.
While the good judge is entitled to his opinion - and, let's be very clear, his is the only one that really counts - I would think there are many people who would disagree with his finding.
It still seems odd to me that you can be convicted of 'unlawful imprisonment' when the person you are accused of imprisoning is sitting in her car in full public view surrounded by Gardai. But, then again, maybe it's just me.

Good news
Almost 300,000 tourists visited Donegal last year spending €83m. And I think we can thank the Wild Atlantic Way for that massive increase.
Considering a number of publications in recent times have described Donegal as the most beautiful county in Ireland it's about time we got our share of the tourism pie.

Killer job
Last week a young Chinese man, a founder of a hi-tech start up company, died. He's the latest in a long line. Apparently, it's now becoming a major issue. These young entrepreneurs are under such pressure to succeed, to get funding, to get their products on the market they work the '9-9-6' rule and it's killing huge numbers of them.
And what's the 9-9-6 rule, I hear you ask? They work from nine in the morning to nine at night six days a week.

Only we decide
The other night on BBC's 'Question Time' former British Chancellor,
Ken Clark, said there should never have been a referendum on Brexit, that the people should not have been consulted. Such arrogance.
It seems the elite in Ireland and Britain still believe only they should decide the big decisions.
And, of course, these elite always look out for the little man...as we all know.
Nasty woman
Don't you just love Donald Trump? He says, during the last presidential debate, no one respects women more than he does and then, literally within seconds, describes Hillary Clinton as 'a nasty woman'.

Are they serious?
The UN has announced it is casting 'Wonder Woman' as a champion/symbol of women power. So there we have it - a cartoon figure with big boobs, a small waist and wrapped in skimpy outfit denoting an American flag is to be a role model for our female friends in oppressed parts of the world?
It's hard to think of a more inappropriate choice.

And finally
Gay Byrne says we should leave Europe when Britain does.
Vincent Brown said the Euro is killing us, and suggested we should consider leaving the currency mechanism. Just two voices of protest uttered last week.
In my humble opinion Europe is run by Germany for Germany and democracy counts for little.

I have often bemoaned the absence in modern day Ireland of a sense of protest, but more and more we have seen that change and a case in point on Saturday is pictured above on Letterkenny's main street when about 30 people sat down on the road to voice their opposition to the Jobstown court decision a day earlier. Regardless of your view on the issue, this peaceful protest points to a real change where people are ready to make their point.