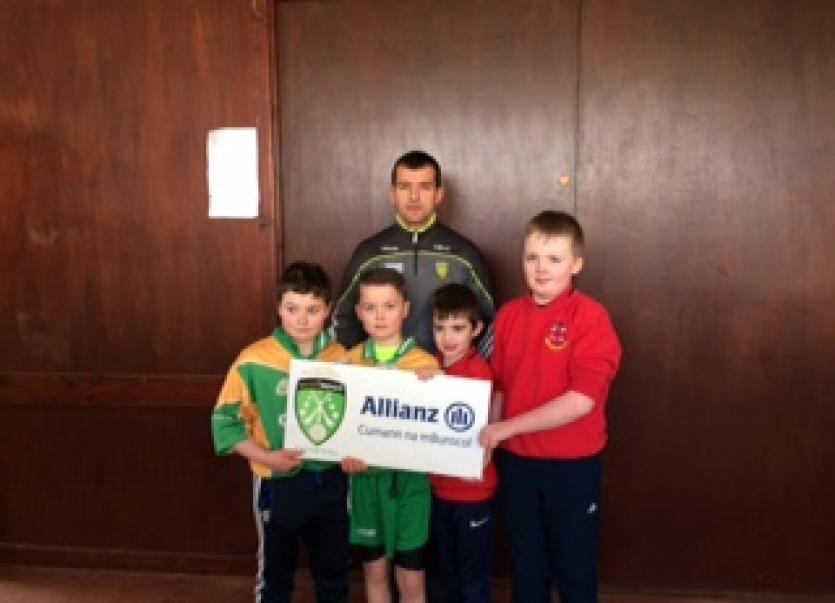 u-11 doubles winners with Frank McGlynn

Everything that is good about the sport of handball was on display in CLG Gleann Fhinne's alley. Seven schools in all were represented. Children from Dromore NS, SN An Choimín, Rockfiels NS and Stramore NS all went home as county champions.

First up saw Conor Galvin and Caolán Duffy of Dromore NS defeat Daragh Houston and Joshua McGlynn of SN An Choimín in the boys u-11 doubles.
​

Oisin McGlynn of SN An Choimín captured the U-11 Singles title with an impressive display against Daniel Lynch of Sessiaghoneill NS. Amy Rodgers and Emma Mc Daid of Stramore NS deservedly won the U-11 girls doubles by defeating Kim Logue and Caoimhe Loughrin of Sessiaghoneill NS. The U-11 action was completed when Ava Doherty of Rockfield NS put on a great show to defeat young Catríona McKinney of Tooban NS.
​
Girls U 11 Singles. 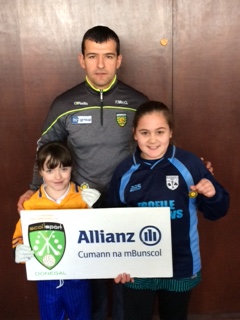 ​
In the U-13 finals Dónal Gallagher of Stramore NS was inpressive and captured the boys singles title against Callum Purvis of Tooban NS.​ 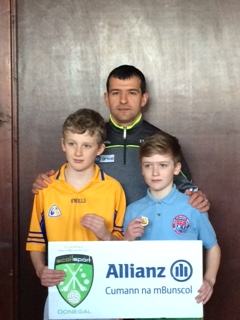 ​
In the U-13 doubles, Stramore NS were once again successful with Danny Hall and Christopher Diver combining to defeat Troy Killalea and Shane Delahunty of Rockfield NS in a close hard fought encounter. The girls U-13 singles title was won in impressive fashion by Katie McGlynn who defeated Shanell Doherty of Tooban NS.
​
Katie McGlynn Girls U 13 Singles Champion 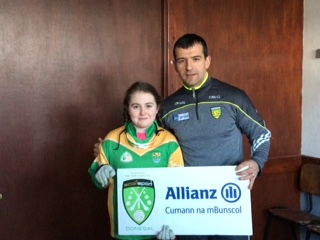 The closest game of the day was left to last when Ciara Gallagher and Katelyn Campbell of Dromore NS played Aibhe McMenamin and Katelyn Houston of SN An Choimín. The Dromore pair eventually coming out on top on an aggregate scoreline of 7 - 11, 11 - 6.
​
Girls U 13 Doubles 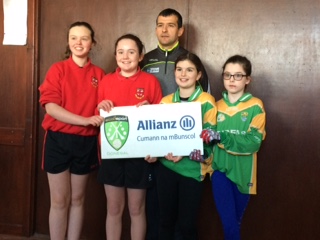 ​
Congratulations to everyone who participated in the Allianz Cumann na Bunscoil Handball this year and from today's evidence the sport is going from strength to strength. Best wishes to all county champions who will represent Donegal in the Ulster finals next Wednesday in Belfast.

A big thank you to County footballer Frank McGlynn who was present on the day to present the medals to the many winners and runners up.

Cumann na Bunscoil would like to thank all schools involved, teachers, parents, Eamonn McDonnell and Manus O Donnell who refereed the competition. Thanks also to CLG Gleann Fhinne and CLG Sean MacCumhaills for the use of their alleys throughout.

Special thanks to Allianz for their continued support of these Cumann na Bunscoil events.