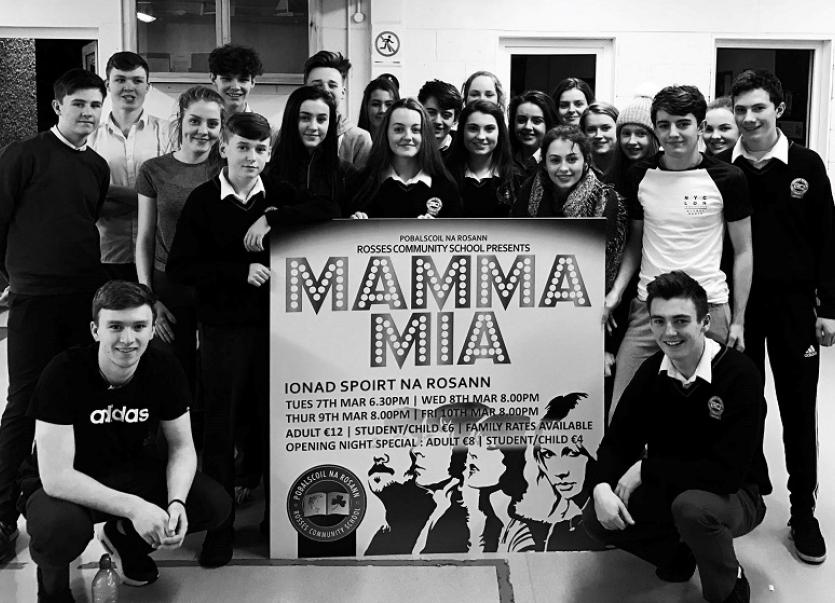 Some of the cast of "RCS Mamma Mia".

Mamma Mia, the smash hit musical based on the songs of Swedish super-group ABBA bursts onto the Rosses Community School stage in Dungloe this week.
The students and staff of the Rosses Community School are about to stage what has been termed “their most ambitious production to date”.
“RCS Mamma Mia” features the classic hits of ABBA and a cast of 105 students from first,second, transition and fifth year. The cast have been extremely dedicated rehearsing every day and on weekends since November
The show will run in the school’s Ionad Spóirt na Rosann, Dungloe, from Tuesday, March 7th to Friday, March 10th.
The Musical tells the story of Donna, an independent, single mother who is about to give away Sophie, the spirited daughter she’s raised alone on an idyllic Greek island. For Sophie’s wedding, Donna has invited her three best girlfriends to celebrate the occasion, but Sophie has secretly invited guests of her own – three men from Donna’s past … in the hopes that one of them will be the father she’s never known.
Over 24 chaotic hours, new love blooms and old romances are rekindled on this lush island full of possibilities.
Taking the leads in the production are Lara O’Donnell, Transition Year student, playing Sophie; Karl Wallace, fifth year student, playing Sky; Bridgeen Doherty, special needs assistant at the school, playing Donna; and Colm Byrne, Technology teacher from Ardara, who will play Sam.
Directors this year are again Ms Suzanne Gallagher and Mr Daire Gillen. Music is provided by the talented Mr David Oliver and his band from Strabane who guides us through ABBA’s famous song catalogue including all the catchy dance tunes and touching ballads that fans have come to love – “Dancing Queen,” “S.O.S.,” “Money, Money, Money,” “Take a Chance on Me” and more.
A hilarious story of love and friendship, you are assured to be astounded by the amazingly talented youth of the Rosses, anyone who has been at previous RCS productions will tell you they are not to be missed.
Ticket prices are reduced for the opening night performance to 8 euro adult,/ 4 euro student, and are 12 euro adult,/ 6 euro student for the three remaining nights.
“RCS Mamma Mia” begins at 6.30 on March 7th and at 8pm on March 8th to 10th. Don’t miss your chance to dance, jive and have the time of your life!