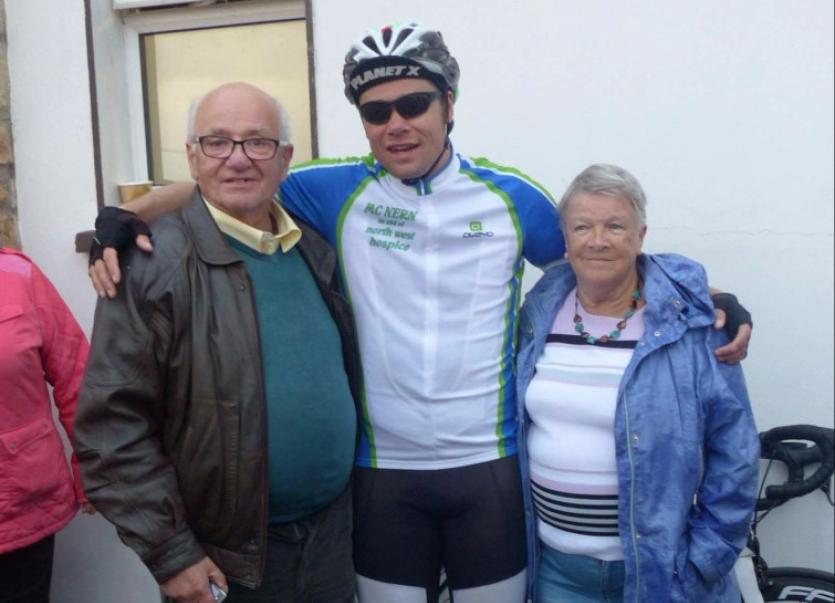 Karol with his parents Tommy and Sheila

Just over three years ago Karol McNern from Ballyshannon was driving long distance cattle trucks from Italy to Spain and, by his own admission, would have had no notion of doing anything more strenuous than casting a fishing line into Lough Melvin.
Fast forward three years and this Saturday a leaner, keener Karol McNern will complete twenty 32km loops of that very same Lough Melvin as a charity fundraiser.
But Saturday’s ‘Lap Around The Lake’ in aid of North West Hospice, is only a ‘training spin’ for Karol as he prepares to compete this August in the epic Race Around Ireland, an ultra distance cycling event, which he has 132 hours to complete.
Once the clock starts in Trim on August 27th, it won’t stop until each rider reaches the finish line at the end of 2,190kms.
Frankly, it’s a monster challenge and before he turns a spoke Karol will have completed his own remarkable personal journey that has seen him change more than his livelihood - he has changed his life.
After 14 years driving huge articulated trucks across the dusty roads of Spain and Italy, Karol had enough of a life that paid well but left him feeling short-changed in other ways.
He decided to park the truck and to those who know the family, it was no great surprise to discover the youngest in a family of seven reared by Tommy and Sheila McNern, was re-inventing himself as a barber, training in Belturbet in Cavan. It seemed almost inevitable

Local legend
Having spent 59 years working as a barber, Karol’s father Tommy, now happily retired, is a local legend. He started cutting hair at just 13 years of age and thousands of men will tell you their first ‘proper’ haircut was with ‘Tommy the barber’ whizzing a ‘Number 2’ blade up the back of their head.
“I suppose with my dad Tommy in the business for 59 years, a lot of the basics were ‘inherited almost’ and I didn’t find it a huge learning curve to get the basics working in the Barber’s Corner in Belturbet in Cavan.”
With all his qualifications secured Karol stepped into the famous Market Street Salon his father had graced for generations.
But as much as Karol enjoys the work, the people, the banter and the cups of tea ferried into him by his mum Angela, the return ‘home’ also saw him take up cycling, literally by chance.
He bought his first ‘proper’ race bike from good friend Ted McCaffrey and his first long distance ride was as a support cyclist for a group who did the Mizen to Malin challenge for MS. The cyclists in that challenge were well known locals Tony Cummins, Gerry Cleary and Aiden Ferguson, who became and remain Karol’s close friends.
On that trip Karol recalls doing 110kms of the 617km distance, which he says “was massive for me at the time”.

Encouraged
He said Tony Cummins “pushed and encouraged” him and once he got into a proper training plan, he found himself doing the Malin to Mizen challenge in 2015 along with Kinlough man Jonathon Costello. They did the race for North West Hospice.
In 2016 Karol really stepped it up, completing the 1,100km Cycle Around Ulster, a non-stop event which he completed in 43 hours and 45 minutes. The support team included the regulars, Eleanor, Gerry and Tony who were joined by Karol’s wife, Paula, Jean Duffy and Frank Timoney.
“That was a big deal for me, I knew once I could do that in decent time I could prepare for this next challenge and a lot of it is to do with the mental prep as much as the physical work.”
As he builds up to August Karol’s time on the bike per week seems almost cruel. He says he has to do one 24 hour stint without a stop once per month and every Sunday he spends a minimum of 12 hours on the bike. It’s not for the faint hearted! On a weekly basis on top of his Sunday spin he must spend at least 25 hours on the bike.

Lap Around The Lake this Saturday from 9am
In preparation for his epic non stop cycle, Race Around Ireland in August, Karol is getting in long training days on his bike.
His first fundraiser for North West Hospice is Lap The Lake, a 32km loop of Lough Melvin on which he plans to do 20 laps and he is inviting all levels of cycling enthusiasts to join him for a lap or for as many as they wish to do.
The starting point will be Askill Community Centre on Saturday next, April 15th at 9.15am and anyone who wishes to join is more than welcome to do so. A 10 euro donation includes refreshments and entry into a draw for a team hoodie, with all donations going to North West Hospice.
Karol will, by the time others join him, have done 18 hours in the saddle and the final two laps will give locals and enthusiasts a chance to join him and support a great cause.

North West Hospice
But after Saturday there will be other opportunities to support Karol and North West Hospice. He and the team will raise monies for Hospice via five specific charity events, the Lap Around the Lake followed by two bed pushes between Ballyshannon and Bundoran and two ‘stationary’ days on a turbo trainer which are planned for before August.
But the main event in August remains the challenge to race around Ireland in less than 132 hours.
The 8th Race Around Ireland starts on Sunday 27th August 2017 at 3pm in Trim, County Meath. In the shadow of the imposing Trim Castle, the riders in the Race Around Ireland and the Irish Ultra Challenge will take on one of the toughest cycling challenges in the world.
The cyclists in RAI have a 2,150km journey past some of the most stunning scenery in Ireland, Newgrange, The Causeway Coast, Malin Head, The Cliffs of Moher, The Ring of Kerry, Mizen Head, the Garden County (Wicklow) and back to Moynalty in County Meath. The solo riders have 132 hours to finish.

You can contribute
Meanwhile if you want to contribute to Karol’s Lap Around the Lake this weekend, just go to Karol’s page on Facebook, Karol Mc Nern Race Around Ireland 2017 for North West Hospice and you can get all the details.

What is the Race Around Ireland
The Race Around Ireland is listed as one of the world’s toughest endurance events, and the heroes of this event are the amateur riders who get an opportunity to compete in this Irish Event with elite riders from all over the world, while endeavouring to finish this mammoth adventure in the allotted time.
The race is part of the Ultra Marathon Cycling Association World Cup Series which includes other huge endurance races such as the Race Across America.
Unlike other cycling races such as the RÁS or the Tour de France, the course is in no way roped off, there are no marshalls controlling traffic flow and there are no planned rest stops.
Once the clock starts at the starting line it won’t stop until each rider reaches the finish line at the end of 2,190kms.
This weekend join Karol at Askill Community Centre from 9am and show him your support.