'Slow down and watch the Daisies' - advice from Brigid 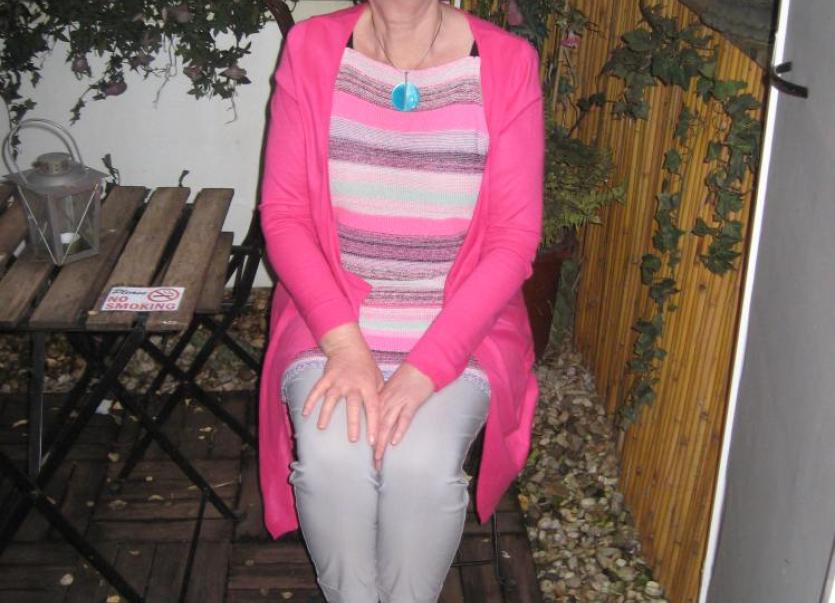 An Annagry-based author, organic gardener and natural health practitioner has penned her first book.
The publication details her life before and after being diagnosed with Fibromyalgia, and how she advocates a slower pace of life to help deal with the condition.
Born in Stirling in Scotland to Donegal parents both hailing from the Rosses, Brigid Gallagher has now returned to the area where she spent much of her childhood summers. It was a place where she practiced natural health medicine initially, but now spends much of her time tending to her organic gardening. She also writes and blogs about her experiences.
Last Friday, May 12th, was World Fibromyalgia Awareness Day and Brigid shared her story of her condition in the hope it may help others with similar issues.
Her memoir, “Watching the Daisies – Life Lessons on the Importance of Slow”, is available to buy through Amazon and other retail outlets, and is her story of a hectic life and events that impacted on her health and her road to recovery.
“I grew up in Stirlingshire. My dad, Michael Gallagher, was from Mullaghduff, and my mum, Brigid Sharkey, was from Mullaghderg Mountain. They left in the 1950s. We used to come back each year for the whole summer in our childhood, and it broke our hearts leaving because we loved it so much.”
She worked for many years in the insurance industry. She later followed her passion of natural medicine and became both a practitioner and an educator.
“In my 20s I worked in an insurance office, but I always wanted to be a doctor. Sadly that didn’t happen and it wasn’t meant to be. When I was 30 I discovered natural medicine and I went off in 1987 to train for a year in England. I came back after I had different certificates in healing, natural medicines and counselling, so I set up a practice in Edinburgh that became very busy. Eventually I became a teacher of natural medicine and taught lots of community projects and at Stirling University Adult Education Department for seven years doing summer schools and night classes.”
She set up a healing centre in training course in Stirling. For personal reasons in 1999, including the passing of her father, she decided to move to Donegal for a new start in life.
“All that is part of why the book is called what it is, as I continued to do natural medicine here, but at a much slower pace than before.”
In 2003 she fell into bad health. Her deterioration began after she was involved in a serious fire in the Kerrytown area and it took up to seven years for her to be diagnosed with Fibromyalgia.
“Since then I have been very proactive in helping myself. A lot of people get Fibromyalgia after stressful events. It is a common denominator, but an early diagnosis rarely happens. Once you get the diagnosis there is lots of support. Things like exercising, healthy sleep patterns is key to recovery. I tried everything. I worked on my diet. I worked on my meditation, all sorts of things. I started going to different therapists. When I got sick my lungs were affected and I could not raise my arm, couldn’t sleep, had sore eyes, very little energy and all my joints flet like I was on fire. I was in a bad way. I started with diet and cleaned that up and tried to take as much organic products as possible. After two years I then retrained in organic gardening," she said.
“It has been a long journey. The first thing to help my arm was massage. Reflexology helped ease a lot of the symptoms. Medical herbalist, David Foley, helped me enormously and it took a long time and perseverance to restore the inner strength of my system,” she added.
Now she is an advocate of slowing life down and this helps her deal with her condition which has improved with careful management.
“You have to slow down. I think when people get sick, it is their body telling them something. No matter what illness it is, there is a message there. For me it was to slow down and just reevaluate life and look at what is important. Ultimately, it doesn't matter about money, health is the number one,” she added.
In 2009 she joined a local writing class in Dungloe and then joined the Rosses Writers' Group when it formed a year later, where she spent six meeting on a weekly basis.
She said writing has had huge therapeutic value.
“Writing is incredibly helpful in healing. I’d really recommend it for anybody and it doesn’t have to be in the public eye,” she added.
She got assistance on her book by journalist, Sue Leonard, and four years later the book was complete.
“The tone of the whole book is about positivity and self help that I got from my insights from journey. There are lots of tips on the natural medicines that helped me and it is a travel memoir as well,” she added.
A keen traveller she has visited several countries in the Far East and Asia and some have compared her memoirs to the hit “Eat, Pray Love” by Elizabeth Gilbert.
Now she regularly updates her blog https://watchingthedaisies.com and says she hope her book will help others living with Fibromyalgia, or similar conditions.