Games to be held in Dublin next year 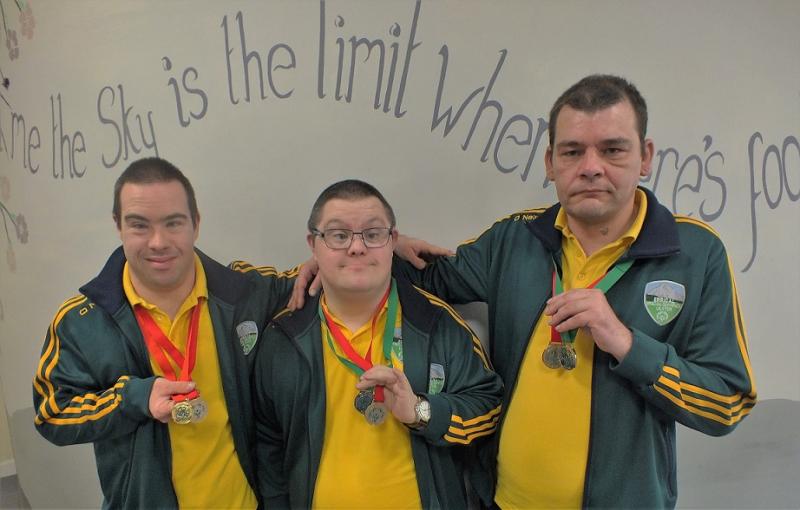 Rónán Ó Coirbín of Gaoth Dobhair, Peter Doogan of Gortahork and Patrick Gallagher of Annagry, who are to take part in the Special Olympics Ireland Games in Dublin next year. Photo Tommy Curran

Bocce players Rónán Ó Coirbín of Gaoth Dobhair, Peter Doogan of Gortahork and Patrick Gallagher of Annagry have qualified for Team Ulster to take part in the Special Olympics Ireland Games in Dublin next year.

“It's some achievement, isn't it?” Noel Flynn, chairperson and coach of the Errigal Special Olympics Ulster Sports and Social Club, said.

To qualify, the three earned gold medals in regional competitions held in April of this year in Templepatrick, County Antrim, where a number of bocce clubs from the Ulster league fielded 120 athletes.

“The three lads are over the moon,” Noel said.

That day in Templepatrick was a good day for the Errigal club. In addition to the three gold medals, other club members brought home three silver medals and one bronze.

“It was fantastic to get to where we got to, to get seven athletes through last year and come back with the medals, Noel said. “Their performances were brilliant.”

The Errigal club was started in April of 2006 in rural west Donegal, where social activities are limited and infrastructure is underdeveloped. Among the first activities organised was a monthly disco at Caisleain Oir Hotel in Annagry, which remains a popular event.

The club first tried their hand at bowls, but when they discovered bocce, an Italian game similar to lawn bowls, the club secured the 60-foot by 12-foot mat the sport requires, and got to work.

They practice at the Burtonport Community Hall, Acres, with up to 30 club members attending practices.

“We're well spread out,” Noel said. Club members also take part in swimming, equestrian sports and activities at Arena 7 in Letterkenny. Many club members are clients of the Tobar Centre in Gaoth Dobhair.

The club will now undertake fundraising to support the athletes in the national competition.

“It's brilliant,” Noel said. “It's going to be great for these three lads and for the club as well.”

Noel said the Errigal club is also looking for volunteers who would like to help with club activities.

Anyone interested in applying to be a volunteer with the Errigal club, or donating to support the athletes in the Dublin competition, can contact Noel through the Tobar Centre or the Angle Day Centre in Dungloe.