US programme to put focus on golf in Donegal 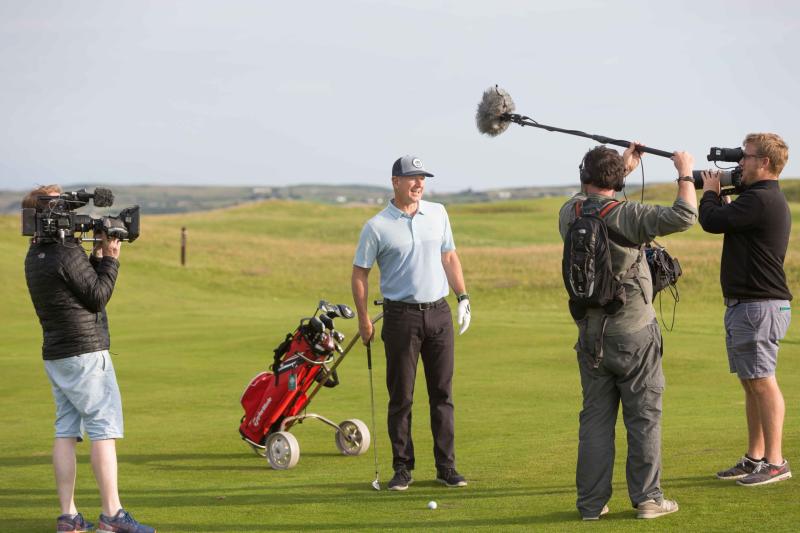 Matt Ginella and the TV crew, during filming in Ireland for the Golf Channel.

A programme about golf in Donegal and the west of Ireland is set to reach millions of golfers in the United States later this month.

Tourism Ireland invited Matt Ginella from the NBC Golf Channel to come and film for "Ginella's Journeys", a segment on "Morning Drive", one of the Golf Channel's most popular shows.

During their time here, the crew filmed at Ballyliffin Golf Club, where they met and had lunch with the general manager of the club, John Farren.

Tourism Ireland said the visit is an excellent opportunity to build on the successful ‘Home of Champions’ campaign that kicked off earlier this year, around the US Masters. The campaign includes golf ads on the NBC Golf Channel and on golfchannel.com, reminding golfers across the US about golf courses on the island of Ireland where champions, including Rory McIlroy, Pádraig Harrington, Graeme McDowell and Darren Clarke, honed their skills.

Alison Metcalfe, Tourism Ireland’s Head of North America, said they were delighted to invite Matt Ginella to film in Donegal and the west of Ireland, "to showcase the world-class golf on offer here to a huge audience of potential American golf holidaymakers.

"Tourism Ireland has an extensive programme of promotions under way this year, to encourage more Americans to consider a golfing vacation on the island of Ireland," Ms. Metcalfe said. "We are highlighting the 148th Open, which is set to take place at Royal Portrush in 2019. Our message is that the island of Ireland offers American golfers the complete package – with some of the very best golf in the world, stunning scenery and the warmest of welcomes.”