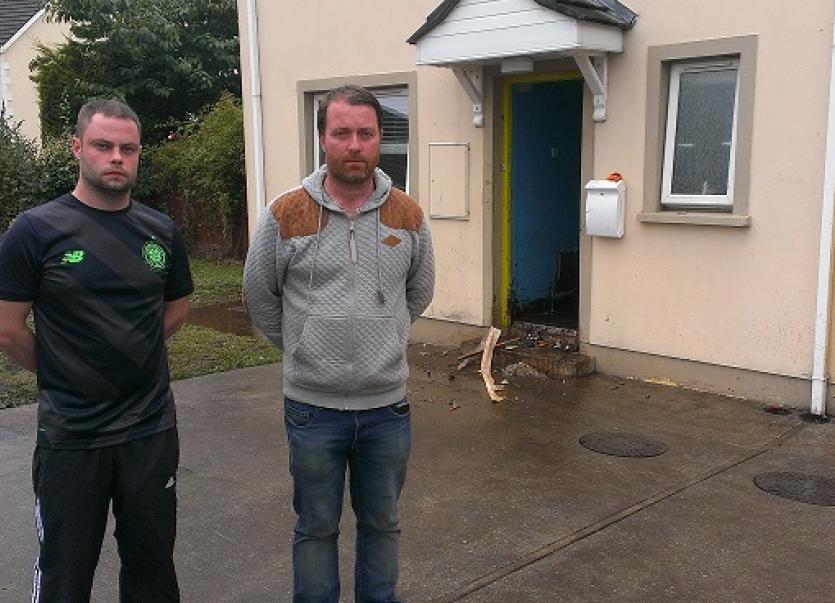 Paul McFarlane and Gerald Gallagher outside the damaged houses.

Home owners in an estate in Burnfoot who had their homes destroyed by the recent floods say that the area has flooded up to 13 times in the last 15 years.
Residents in eight of the 12 houses in the Paírc An Gríannan/Líos na Greíne estates in Burnfoot village have been forced out of their homes after water poured in over their flood defences last week.
Home owner and father of four, Gerald Gallagher, said he and his family have been left “homeless” by the damage and that they raised their concerns on flooding in the area with the authorities many times.
Gerald said that the speed of the rising water level gave them very little time to react.
“We are homeless now. We didn’t have time to save anything from the house. I went out to the shed to get the flood gates and within 30 seconds the water had risen up to my knees. I could hardly walk back to the house. I got the floodgates on as the water wasn’t up to the backdoor step at that stage. I got the gates on, but within 40 minutes, or less even, the house was engulfed with the water. It came so quickly it was unreal,” he explained.
His neighbour, Paul MacFarlane, whose house was also severely damaged by flood waters, said their estate has flooded many times before. He realised the seriousness of the situation when he noticed his home heating oil tank beginning to float.
“We were flooded many times before. It has been highlighted in the media before and nothing was done by the council. They had so many years to figure out a plan for here,” Mr MacFarlane stated.
Gerald is now in B&B accommodation with his family, while Paul is sleeping on his sister's couch since the incident.
Walking through the estate to outline the damage to his home, where the stench of raw sewage mixed with home heating oil fills the air, Gerarld says he feels he cannot return to his home as it has been “destroyed”. He is fearful that the same thing could happen in the future.
“We have been here 15 years and it has been a great estate. There has never been any bother here. Now we have two houses washed away and they say it was an Act of God. We are 13 times fighting so it is not an Act of God. It might have been an Act of God first time,” Mr Gallagher added.