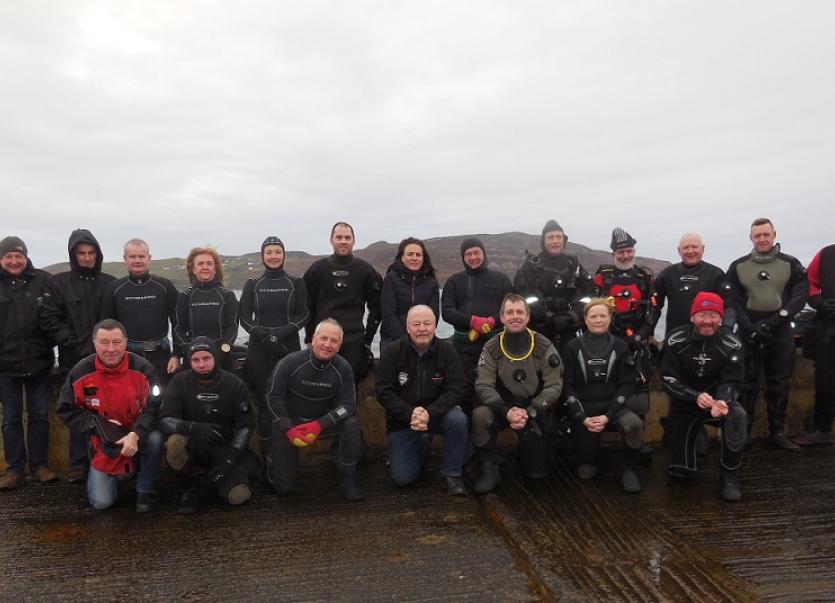 Members of the Sheephaven Search and Recovery Unit at Portnablagh.

Sheephaven Search and Recovery Unit were in training mode last weekend, when they took to the water in Portnablagh Harbour for one of the two mandatory training sessions that are required to qualify a diver to remain on the unit during the year.

These divers are all affiliated to CFT and are volunteers who respond to recover casualties that are known to be lost as a result of water-based tragedy.

The Irish Underwater Council (or CFT, as Gaeilge) is the national governing body for recreational underwater sports in Ireland. CFT regulates, promotes and trains divers and snorkel divers throughout the country. It was founded in 1963, starting with six clubs, and has grown today to encompass 80 clubs throughout the island.

CFT Search and Recovery divers are volunteer scuba divers who are specially trained to search for and recover persons lost either in a freshwater or maritime incident. There are 25 CFT S&R Units in Ireland, involving more than 200 divers.

The governance of the process is operated under a service level agreement between CFT and the Irish Coast Guard (ICG), with the divers called out initially by the gardaí and subsequently by the ICG to the National CFT co-ordinator.

Subject to an on-site safety assessment, the divers will then conduct a series of underwater search patterns until either the casualty has been recovered or the site has been considered fully searched, allowing the authorities to close that location of their general search plan.

All the divers involved are unpaid volunteers and in most part the units they are from have come about because of a need to provide the community-based resource due to a tragedy in the past. All the dive gear and boats are bought from the divers’ own funds, with additional operating costs financed by the community and in some cases the relevant local authorities.

Anyone interested in becoming an S&R diver can first gauge whether diving is for them by having a go at one of the Sheephaven Try-A-Dives, with the next one organised in the Mevagh Diving Centre Carrigart on December 6th, at 7.30pm.

After that, a potential diver can commence the CFT trainee programme that, through an incremental process, will eventually take them to stage where they can consider joining one of the S&R units around the country.

A place on the Sheephaven Try-A-Dive can be booked with the club Training Officer Anne Boyle by ringing 087 6997679.