Be sure to catch Letterkenny's magnificent panto The Snow Queen 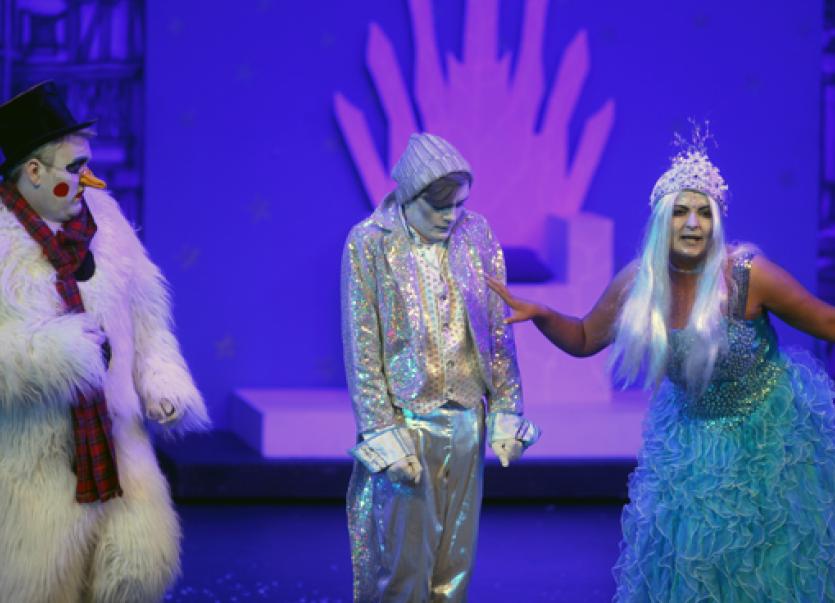 Zara Holmes as The Snow Queen, Kieron Clarke as Snowball (left) and Joe Gallagher as Icicle in a scene from The Snow Queen, a production by Letterkenny Pantomime Society in An Grianan Theatre which ru

Letterkenny Pantomime Society's The Snow Queen which opened yesterday (Saturday) at An Grianan Theatre is set to attract fantastic audiences all week to a show that shouldn't be missed.

The Snow Queen is a glorious spectacle of a pantomime, it is filled with top class music, choreography and great comedy routines.

All week this production of the Hans Christian Anderson fairytale under the expert stewardship of Patrick Doherty will entertain audiences at the Letterkenny venue.

A cruel-hearted snow queen tears apart a close relationship and a magical journey of adventure begins in a new play by the Letterkenny pantomime society, which took to the stage for the first time last weekend.

The villainous, evil and sassy Snow Queen is played to perfection by Zara Holmes.

Sarah Terry Sweeney makes a welcome return to the panto stage this year as the character of Anna. Sarah has the beauty, the stunning voice and the heart of gold to portray the character of Anna perfectly. Nehemy Mutombo making his pantomime debut takes the role of Prince Hans. Nehemy is blessed with a great singing voice and stage presence. His portrayal of Hans is both professional and charming.

Olaf, Ilaf and Dan are played by Garry Coll, Ryan McKelvey and James Patton respectively and these three perfectly together. Garry Coll has been a panto regular for the past number of years and Garry is one of those performers who makes it easy for those around him. Ryan and James are two panto debutants. Ryan plays Ilaf one of the gang of robbers.

Kieron Clarke and debutant Joe Gallagher take on the roles of Snowball and Icicle. These two work seamlessly together. Curly and Wurly are played by Donna Cole and newcomer Kira Mills. Donna having established her credentials in previous productions gives a powerful and assured performance as the loveable Curly. Kira has been plucked from relative obscurity to play the part of Wurly alongside Donna, and this talented lady brings her own distinct flavour to the role. The loveable Mark Ward will wear the Rudi outfit and Mark’s perkiness and personality shine through in his performance.

Daithi Doherty who delivered a powerhouse performance as the Beast in last year’s production of Beauty and the Beast returns to take on the role of Prince Kristoff. Andy McGranaghan is another who makes a very welcome return to the panto as Adele the dame and he brings with him a wealth of experience. Andy has played many different roles over the years and he produces one hell of a performance as the feisty Adele. The lifeblood of any stage show is a strong chorus and Kelda Kelly and Chloe Deery have ensured that the all dancing and singing chorus in the Snow Queen are nothing short of spectacular and the children’s scene which is a highlight of every panto is another master piece from Kelda and her team.

Mark Mills and Donna Peoples wear the crowns of the King and Queen of Sonderland in this show. Mark has played the role of the king in previous performances and can be counted on to deliver the goods in his usual perky fashion while Donna makes her panto debut.

Paddy O’Connor and Tommy Kerr are responsible for the spectacular sets and backdrops while Una McGlynn and Frances Walsh will be taking care of the make up requirements.