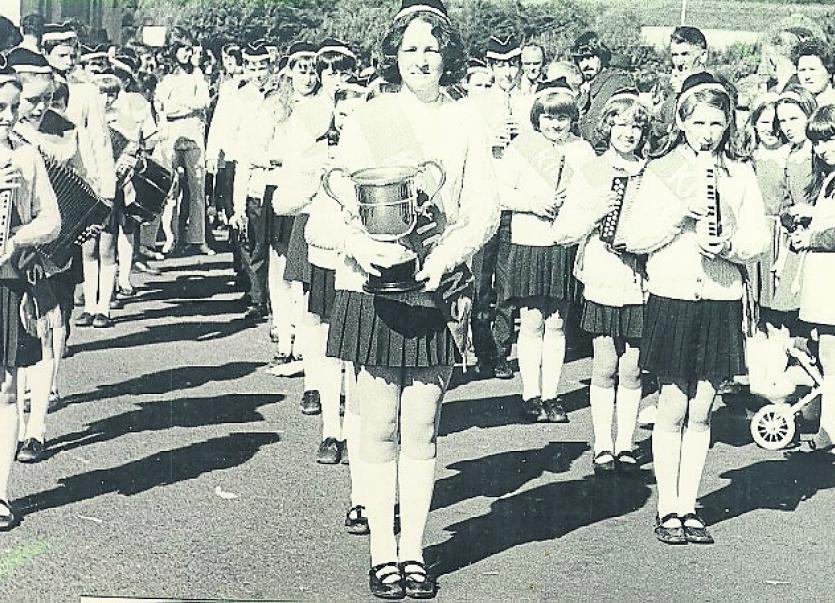 The Killian Band at the Rossnowlagh Féis.

Killian Band was established in Inver in March, 1968 by principal, Vincent O'Donnell, from Annagry. A love of music and culture drove the Irish speaking principal to establish a band the children would treasure for life. 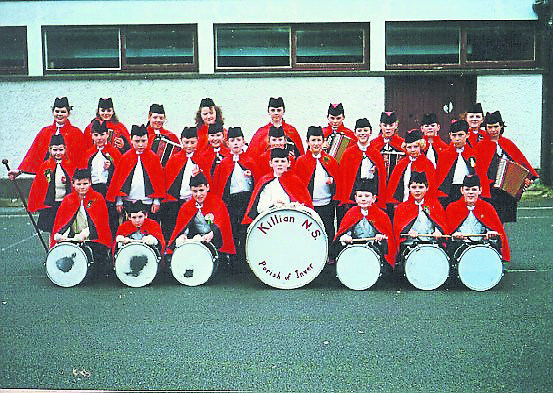 Members of the Killian Band will celebrate 50 years as they march down 5th Avenue in New York on St. Patrick's Day. Pictured above is a photo of the old school band at Killian NS.

The principal laid the band hats, drums and staff in front of the schoolchildren and watched as their eyes light up with joy.
The children in the senior classes at the school had worked hard over the last number of months and now they felt like they were becoming a true marching band.
In March 1968, principal Vincent O'Donnell established the Killian School band in Inver.
“We began to play on tin whistles and we progressed from there. Money was scarce,” Vincent said.
The hats and instruments had been sourced by Vincent from two local bands in Annagry when they amalgamated.
The band performed for the first time when a local priest, who had been ordained, returned home. The school children marched the road in their white Aran jumpers and their new hats. The band was invited to perform in many different events in the following years.
They played at all festivals from Burtonport to Ballyshannon. The band enjoyed great success, winning every major competition in the county along with two Ulster titles.
The Ulster titles have always been difficult to win and the winner of the title has always been a true contender in the All-Ireland final.
On the occasions that the Killian School band took the Ulster titles the band couldn't afford to travel to Kerry to compete in the grand final.
However, Vincent made the journey and he was of the opinion that the south Donegal band would have taken the All-Ireland on both occasions.
In the early 80's families began to emigrate and the number of musical families in the area became scarce.
The students who left the national school to attend nearby schools returned and played with the band, which helped.
At the end of the 80's families began to return home again and the band played once again.
The band bought new uniforms, parents became involved and the band began to enjoy its former glory.
The band began to play less and less competitions and focused on events they were invited to .
In 2001, Vincent was asked by the Department of Education to undertake a project which focused on the Irish language. On the brink of retirement and with a great love for the Irish language the Annagry native agreed to undertake the work.
In 2003, a celebration was held for Vincent between Christmas and New Year.

Celebration
At one point in the night, organisers began to clear the floor, much to Vincent's astonishment.
To his delight the band emerged onto the floor and played a number of tunes during the celebration.
“There were 40 of them playing. Students from the 70's and 80's were among them. It was just lovely,” he said.
In London in 2015, Vincent was present playing with the well-known Ranafast band.
He was waiting for the march to begin when from the corner of his eye he saw a woman who used to play in the Killian National School band.
He walked over to her and they began to talk. “I asked her why she was playing with the band she was with. She looked at me and said 'there is no other band to play with,” he said.
They decided at that point to bring the Killian band over in 2016.
“It didn't work out in 2016 but we did make it in 2017,” Vincent said.
Practice later began in earnest. The band played in Dungloe on Easter Sunday. They also played in Bundoran and took part in the popular Mary from Dungloe Parade.
This March, the band which this year celebrates half a century, will go to New York and march proudly down FifthAvenue.
There are 25 members in the band. However, many of those who have left Donegal are making the effort to join the band in New York.

Off to New York
Former members will travel from the UK and America to meet their friends in New York.
The band members have cemented strong friendships over the years and just to prove how determined they are to meet up again, many are willing to pay for their own travel to play in the band which brought great happiness during their childhood.
Two former members are traveling from Chicago for the celebrations.
It is estimated that by the time all members are present on Fifth Avenue, there will be 30 former band members from south Donegal marching in the grand parade.
The band will stay in New York for a period of five days.
Vincent is delighted that the band will grace Fifth Avenue on a day that the Irish diaspora celebrate their identity across the globe.
A film crew from TG4 will join the band on the historic 50th anniversary. The crew has already attended band practice and are eager to captivate the proud moment on camera.
Vincent is delighted that those he taught during their school days continue to want to be part of the band and perform with him.
“It's a priviledge to be going there with them. It is all good fun and laughter,” he said.
Fundraising events are being planned to cover some of the costs of bringing band items across to America.