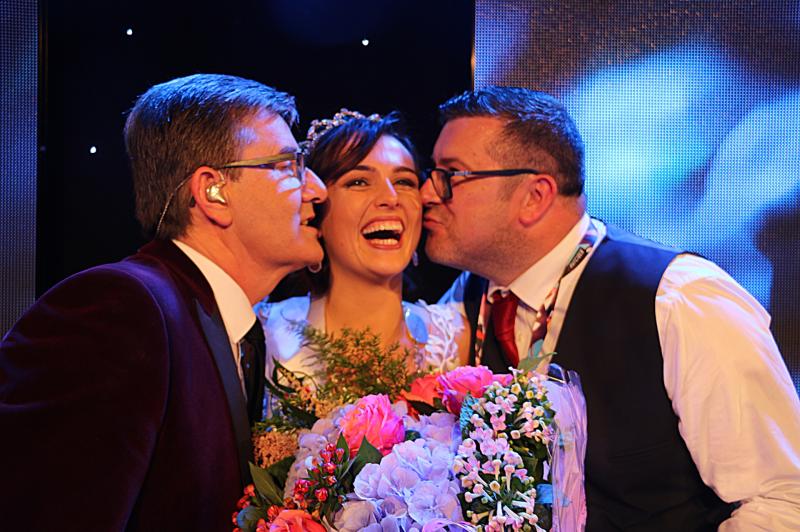 It's flowers and kisses all round for Caroline from Daniel and Seosamh O'Domhnaill, Festival Director. PICTURE: MATT BRITTON

25-year-old Caroline O’Donnell, a Master of Science graduate, was crowned the 2018 Mary From Dungloe on Sunday night in Dungloe.
There were huge cheers and celebrations at the crowning ceremony in The Ionaid Spoirt na Rosann when the 25 year old sports fan was confirmed as this year’s winner.
From Leffin, outside Dungloe, she contested as the Dungloe Mary.
A past pupil of Acres N.S., Burtonport and Rosses Community School, she graduated in 2016 from Maynooth University with a Bachelor of Science (Honours) degree in Physics and Biology.
More recently, she graduated in November 2017 from the Electronic and Mechanical Engineering department of Dundalk Institute of Technology, with a Master of Science in Renewable Energy Systems and works in Abbot, Donegal Town. A sports fan, she is the captain of the Dungloe Ladies GAA team and also a member of the Traigheanna rowing club.
The crowning cermony was hosted by Daniel O'Donnell and televised by TG 4. It was a guessing game the whole way through as every girl displayed fantastic ability and talent, but at the end of the day a decision had to be made and Caroline emerged as the very popular choice.
Moya Doherty of Riverdance, who witessed her own troupe put on an exceptional performance on the previous night said, “Donegal should never worry about the lack of talent and ability in the county - in every aspect, arts, culture, ambition and ability to succeed, the county is simply brimming over.
“The county has a lot to be proud of.”
TG 4 will screen the whole show on Saturday next at 7.15pm. This, the 51st Mary From Dungloe Festival, was an outstanding success for the organisers.
Despite at times mixed weather, the on-street entertainment packages put together by the committee for thousands who came to Dungloe, proved a huge success and events such as the Randox Ball and many more were brilliantly supported.