Author Julian Vignoles looks at the familial, musical and other influences that inspired Gallagher 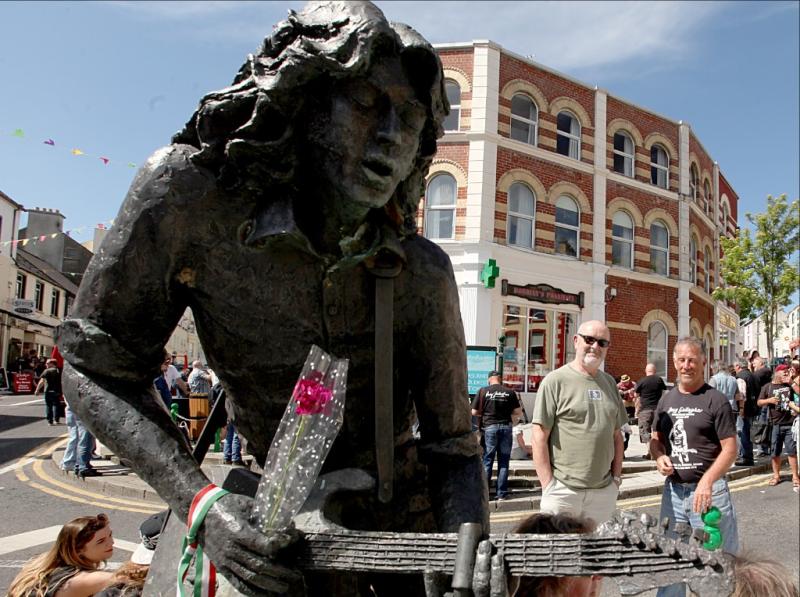 The Rory Gallagher statue in Ballyshannon Rory Gallagher is the subject of a new book written by Julian Vignoles. Born in Ballyshannon, Gallagher is regarded as one of the greatest guitarists ever and this book is sure to be of huge interest to so many people, not least the legion of fans who now annually arrive in the south Donegal town for a festival in his memory which continues to grow in popularity.

Meticulously researched, 'Rory Gallagher – The Man Behind the Guitar', is  Julian's third book. Drawing on extensive interviews, Vignoles casts new light on the familial, musical and other influences that inspired Gallagher, and on the complex personality that drove his career.

He reassesses Gallagher’s song writing, often overlooked because of his dexterity as a guitarist. Crucially, Vignoles shows how many songs speak eloquently – and poignantly – about the person who penned them. Meticulously researched, this portrait is the insightful biography that Rory Gallagher deserves, as revelatory for his legions of loyal fans as for curious rock and blues enthusiasts.

Gallagher, revered as one of the greatest guitarists bounded across the stage with the swagger of a rock star, but offstage he was a shy, unassuming man. There were no wild parties, no marriages and divorces. His short life shifted between the bright lights of his success and the darkness of personal struggle.

Gallagher was a multi-instrumentalist, songwriter, singer and champion of blues music. His career began in an Irish showband, followed by four years as the central talent of Taste, one of the great Irish bands. He went on to even greater fame as a solo artist in the 1970s. His short life was dedicated to a steadfast musical vision, one that continues to burn brilliantly in rock history.

Reassessing Gallagher’s song writing, Vignoles shows how many songs speak eloquently – and poignantly – about the person who penned them. Meticulously researched, this portrait is the insightful biography that Rory Gallagher deserves, as revelatory for his legions of loyal fans as for curious rock and blues enthusiasts.

Rory Gallagher – The Man Behind the Guitar is published in hardback by The Collins Press, price €24.99. It is available in all good bookshops and online from www.collinspress.ie.

Vignoles, from County Wicklow and living in Ranelagh, Dublin, was educated at University College Dublin. He worked for Hot Press in the late 1970s before joining RTÉ, where for over thirty years he produced factual and entertainment programmes on both radio and television, including two music series, Christy Moore Uncovered and The Paul Brady Songbook. This is his third book.

Here's a sample of some of the fascinating detail offered by Vignoles in 'Rory Gallagher – The Man Behind the Guitar':

* Rory Gallagher’s parents sourced his first guitar from William Doherty who was the agent for several catalogues. According to his son, Ivor, Rory’s parents paid for it in installments with what was called a club card, at the rate of one shilling and threepence each week, the last payment being made in February 1958. This fairly basic instrument, a four-string ukulele type, was, arguably, where Rory Gallagher’s career began.

* Gallagher’s famous Fender Stratocaster ’61 came from Crowley’s Music Store on Cork. He made his own modifications to the instrument. The tuning pegs are replacements, and odd ones: five Sperzel pegs and one Gotoh. This is an insignificant detail except that in once referring to it, he revealed a primitive belief: ‘The machine heads have been changed a million times, except this odd man out here, I left this sixth one out for the gypsies. It fell one night and the back came out of it, so I just left it there. It was a little bit spooky so I left it alone. It’s a superstitious thing.’ The pick guard was changed during his time with Taste. Only the middle pickup is original. The final modification was that of the wiring: Gallagher disconnected the bottom tone pot and rewired it so he had just a master tone control along with the master volume control. He installed a five-way selector switch in place of the vintage three-way one.

* Brian May, Queen’s guitarist, had this to say about Gallagher’s sound: ‘He was one of the very few people at that time who could make his guitar do anything, it seemed.’ May saw The Taste at the Marquee Club on Wardour Street one night, observed Rory with the Stratocaster, and wondered, ‘How does that [sound] come out of there?’ He stayed on that night till the venue was being cleared, and got talking to the Cork man. Rory showed him the AC 30 amp and described how he used the control booster and the master treble control. ‘So Rory gave me my sound. And that’s the sound I still have.’

* Pete Brennan recalls that when he attended service at Trinity Presbyterian Church, just off MacCurtain Street, he would regularly meet Rory hurrying to Mass in Saint Patrick’s church on the Lower Glanmire Road. ‘He always wore a white shirt and black jacket. I’d say he never missed Mass.’ Art Lorigan, also from Cork, and a member of Sleepy Hollow, a band that played support to Gallagher several times in the 1970s, remembers that side of Rory. Unlike his peers, Gallagher would gladly offer to explain the importance of the sacrifice of the Mass, and willingly reveal his faith. ‘I remember him once saying, “Do you know the way you have good days and bad days? Some days are three out of ten and another day might be eight or nine out of ten?” His belief was that this doesn’t happen by accident, that there’s a higher power involved for all of us, that there is divine intervention.’ He also remembers that if a coarse joke was being told in company, Gallagher would be the one to demur politely.

* In the summer of 1969 Taste undertook an American tour as part of a star-studded line-up that included Blind Faith, Delaney & Bonnie and Friends, with luminaries like Eric Clapton and Ginger Baker, who had been in Cream, and Steve Winwood of Traffic. The Robert Stigwood organisation had come up with the idea that they would all share a tour bus. Not surprisingly, touring tensions emerged and, by the end, no one was speaking to anyone else. Dónal Gallagher revealed that one of his jobs on the tour was trying to control Cream’s pugnacious drummer, Ginger Baker. He had briefly worked as a roadie for Cream when they were in Northern Ireland, so he knew the form – and egos – of the band members. ‘I remember going into the dressing rooms after one gig and Janis Joplin was standing there. She said: “Ginger, I got to tell you, your new band, it sucks, man”. I thought he’d swing at her.’  Another incident marred the tour: the singer Bonnie Bramlett, of Delaney & Bonnie and Friends, was traumatized when her hairdresser and friend, Jay Sebring, was murdered along with Sharon Tate in the infamous Charles Manson killings on 9 August 1969. The tour bus at one stage also did a bit of humanitarian work, smuggling two US citizens into Canada to avoid the US Army draft for the Vietnam War.

* The only Gallagher recording with someone else playing the guitar is ‘Race The Breeze’ in which Rory drew from the train tradition in rock ’n’ roll and Lou Martin, had the honour of playing rhythm.