DONEGAL TOP OF THEIR BANK OF IRELAND MCKENNA CUP SECTION 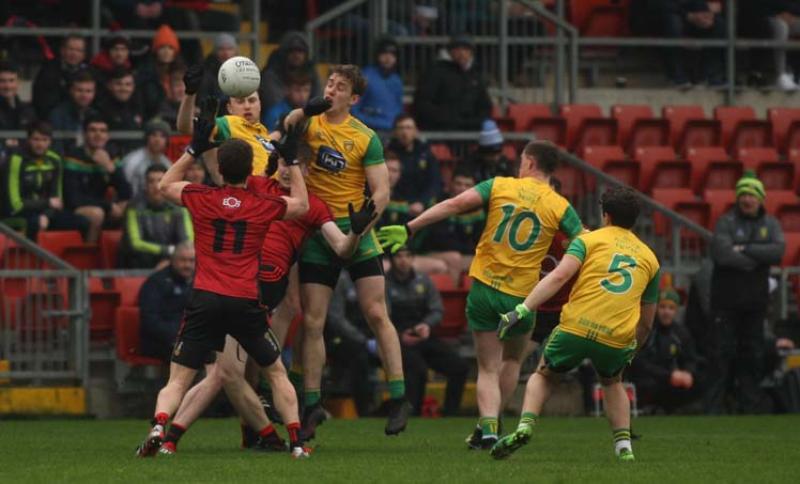 Donegal had another easy victory in their second game in the Bank of Ireland Dr. McKenna Cup against a young Down side in Newry.

After an easy win over Queen's in the opening game, Donegal impressed with ten different scorers.
They now top the group and will meet Cavan on Wednesday night in MacCumhaill Park needing just a draw to qualify for the semi-final as group winners.
An impressive five points on the trot in the last 12 minutes of the half, pushed Donegal to a deserved 0-9 to 0-3 interval lead.
Down made a contest of it in the early stages when they held Donegal to a 0-4 to 0-3 lead by the 20th minute of a half where Martin McElhinney and Jamie Brennan were particularly impressive.
Niall O'Donnell got Donegal on their way inside the first minute and the St. Eunan's man was one of six different scorers in the opening half.
Down did have a goal disallowed from Ciaran Harney in the first quarter due to the three handpass rule, but they were no match for the visitors.
Michael Langan, Jamie Brennan and McElhinney hit two points each, while Martin O'Reilly and Caolan McGonagle from a '45' were the other Donegal first half scorers. And it could have been better as Donegal hit six first half wides and dropped three into the Down 'keeper's hands.
There was just a minute on the second half clock when Ciaran Thompson pointed to ensure that all of the starting forwards were on the board. Paul Devlin had a free for Down while Donegal lost Eoin McHugh to a hamstring injury.
Martin McElhinney replied for Donegal but Down hit two points in as many minutes from a Devlin free and Conor McGrady to cut the deficit to five - 0-11 to 0-6.
However, Donegal responded well with points from Peadar Mogan and a Niall O'Donnell free with 16 minutes left.
Martin McElhinney, with his fourth, stretched the lead and Niall O'Donnell added a free before Conor McGrady hit a great point for the home side.
Donegal killed off the game on 62 minutes when a high ball in over the top from Oisin Gallen saw Caolan McGonagle sneak in to palm to the net.
Jerome Johnston had a half goal chance at the other end but it went over. Another substitute Owen McCabe added another, while Martin McElhinney escaped a black card and sin bin.
Paul Devlin had his third free to cut the lead to eight points with two minutes left.